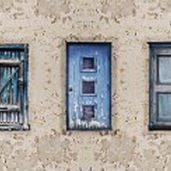 As the Book of Common Prayer has been telling us for centuries, in the midst of life we are in death. For obvious reasons the corollary, that in the midst of death we are in life, has never caught on to quite the same extent, despite the best intents of spiritualism.

But wait. False Choices, Megan Cronin’s bold debut play, tells us that the apparently deceased may not be quite as departed as we, or they, thought. Rather, they are, in the prosaic sense of the word, late. On the one hand their lives are over; on the other, here they are, debating the merits or otherwise of their worldly presence and finding, to everyone’s surprise, that they have a degree of choice in what happens next.

This choice is expressed by the juxtaposition of two doors; enter one and you can go straight back into your life, joining it at the point where you chose to leave it. Yes, the people before us are, in the grim sense of this adjective, successful suicides.

Choose the other door and that’s your lot; gone for good. Or indeed for ill. Just because you are dead does not mean that you do not still face the prospect of oblivion, or whatever it is that true, irreversible beyondness imposes on us.

Where does this leave us and the four young people who come posthumously before us? This one’s easy to answer because the place has a name, The Grey. Not fifty shades of the stuff; all that kind of thing has been left behind in the old life, the pre-death one. No, this is a single ongoing penumbra. And yet; Shades are precisely what these post­-life people are, dramatic descendants of Homeric ghosts or the ombra of Dante’s Divine Comedy.

“Where am I?” is the perfectly reasonable question posed by the recently­ shaded Matthew to the relative veteran of this estate, Clara. The thing about The Grey, she replies, incontrovertibly, is that it is neither black nor white. Gone are the old certainties, if ever they were such, as light meaning alive and dark meaning dead. As their conversation unfolds, it takes on the character of an edgy exchange between a therapist and her new, raw client. “You choose what happens next,” she says. He rolls his eyes in horror, not at the burden of choice but at the tricksy professional certainty of his companion.

A hanged man drops, literally, in. Then another, a bearded fellow freshly doused in the blood of his lethal gunshot wounds. The questions come and go. How long have you been here? When do we leave? Why did you (try to) kill yourself? If these are unanswerable because of the climate of unknowingness that prevails in The Grey, the odd rational perception comes through like a lantern from the mist: “Trying to understand a person’s life by the last moment is like trying to judge a book from its last page.”

“Being here,” says Clara, with the confidence of a group leader in a recovery programme, “allows you to change your perspective.” If it weren’t poignant, it would have the kind of hilarity you find in the good old chestnuts like death being nature’s way of telling you to slow down.

So, to share the curiosity of those in The Grey, what is going on? The answer is, to use another much lived­-in term, existentialism, and it gives this quirky piece the air of a teenage Beckett or a student Sartre. This is not to patronise. Like its protagonists, it wants to know what’s going on, how and why lives come a cropper and turn their incumbents into self­-murderers; above all, where we go from here. In this context, “here” is not grey and elsewhere but vivid and present. To put it at its crudest, counterfeit death becomes analogous to that even more challenging condition, real life.

The author, who also directs, draws a strong performance from Jon Cotrell as Matthew, understandably traumatised by his own death; and from Kate Huntsman as Clara, treading the hazardous line between controlling and clueless.

False Choices tells the story of Matthew and Clara.
Matthew is a modern ­day 25 year old from London who has just killed himself by jumping off Waterloo Bridge. Clara is a 24 year old from Arkansas U.S.A, who drowned herself on June 2, 1962.

They meet in The Grey. The Grey is a purgatory ­like zone, where people go moments after they’ve committed suicide. In The Grey, people make choices, understand their lives and find human connection.

There were moments in Two Billion Beats when one wonders if the youth of today really do talk in the way in which the script says they do. Do they … END_OF_DOCUMENT_TOKEN_TO_BE_REPLACED

I have spent much of the last thirteen months of Lockdown (it seems a great deal longer!) in trying to avoid ZOOM meetings, but Dr Will Houstoun’s The … END_OF_DOCUMENT_TOKEN_TO_BE_REPLACED

Diplomacy is better than brute force, though in Ali Stroker’s case it wasn’t so much consultation and dialogue that secured her roles across film, … END_OF_DOCUMENT_TOKEN_TO_BE_REPLACED

This was like an eighty-minute meeting that could have been an email. The only worthy bit of narrative was a few sentences, printed white text on a … END_OF_DOCUMENT_TOKEN_TO_BE_REPLACED