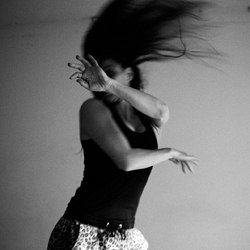 “I’m absolutely fine,” says one of several voiceovers in Foreign Body, a simple and somewhat effective, if brief, performance, in which every voice is a voiceover. As a note in the programme puts it, “All voices are the actual voices of the people in this story.” This leaves the single performer on stage, Imogen Butler-Cole, to move around, with a chair centre-stage, and seven mirrors surrounding her in a semi-circle. Now, in some ways, someone who has survived the trauma of a crime against the person might well be absolutely fine – and why not? There’s no talk of there not being a roof over one’s head, for instance. But our performer’s tentative footsteps, followed by some frantic movement, suggest that while everything is okay on the surface, deep down there are certain issues of a psychological nature that take longer than the physical scars to heal.

If the energetic dancing seems incongruent with stories of sexual abuse told in retrospect, it is
balanced out with slower movements and, in more than one occasion, a stillness. At one point the
audience is watching Butler-Cole watching herself in a mirror, over several narratives. Described in
this manner, it reads like watching paint dry, but the inactivity allows the audience’s minds to
concentrate on the stories being unfolded. Imagine the alternative: any sort of attempt at re-
enactment of what is described would almost certainly be in bad taste. Done this way, there’s no
unnecessary sensationalising. Still, I think I would have preferred monologues told in a number of
direct addresses to the audience.

One of the victims (perhaps ‘survivors’ may be a more appropriate term) talks about being brought
up to please people, and particularly to please men. Her words can only be taken at face value –
there is, technically speaking, only limited character development as the focus is on critical incidents and their aftermaths. Later, one of Butler-Cole’s own attackers talks about feeling “ashamed and embarrassed”, and there’s a focus on restorative justice rather than the ins and outs of the criminal justice system, which isn’t, as far as I can recall, even mentioned – or if it was, there wasn’t much discussion of it.

It was interesting that, in the post-show acknowledgements and announcements that performances at the Vault Festival are becoming renowned for, a hope was expressed that the audience “enjoyed the show”. Enjoyed? No. For there is nothing inherently enjoyable about listening to such harrowing tales of women being subjected to such despicable acts, and I can’t help thinking that if I were to have ‘enjoyed’ this production, that just might be something to very seriously reflect on. This is a
most timely show, in the light of #MeToo and #TimesUp, and offers no tidy solutions, just encouragement and an assurance that help is out there for those who would like it.

An invitation to participate in a post-show discussion was taken up by many in the audience, despite
having to leave the theatre and go to another part of the Vault Festival site to do so. Due to the
sensitive nature of those conversations I will not venture into further details about them. But the
performance itself is assured and genuinely interesting – each person recovers in their own way, in
their own time.

Foreign Body is the debut solo show by London-based artist Imogen Butler-Cole about hope, healing and forgiveness after sexual assault. The play uses movement and testimonial recordings to tell Imogen’s own story, that of the perpetrator of one of her own assaults and those of eight other survivors of sexual assault.

In the wake of #MeToo, #TimesUp and the naming of The Silence Breakers as TIME Person of the Year, Foreign Body has never been more relevant in relating the forms that sexual assault can take, the way the most “benign” or extreme cases can impact our lives and that it is always possible to overcome.

Foreign Body aims to destigmatise dialogue around sexual violence. Every show is followed by a discussion with the performer alongside other survivors, campaigners and support workers. At VAULT Festival these will include: Sirin Kale, Associate Editor, Broadly; Nathalie McDermott, Founder, On Road Media; Dr Nina Burrowes, Psychologist and Campaigner on Sexual Violence.