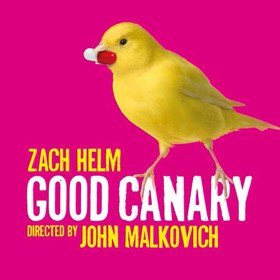 The canary’s appearance is brief. She is brought in inside her cage by Jack (Harry Lloyd) as a present to his deeply troubled wife Annie (Freya Mavor). The metaphor is a bit clunking. Poor Annie; beautiful, brilliant, articulate, loving is trapped in a hell of her own making. Caged and vulnerable because like Sylvia Plath she desires too much “… the things that will destroy me in the end.” The cage is a New York apartment minimally furnished but the locale cleverly created by back projection in this supremely well-designed presentation of American Zach Helm’s intriguing drama. The play, which is receiving its first English language production at the Rose Theatre, Kingston-Upon-Thames, is directed by actor/director/polymath John Malkovich – and that is a bit of a coup for the Rose. It’s a big theatre to fill and an unusual one but on the evidence of the first few nights its looks like the Malkovich name will be putting bums on the rather solid tip-up seats.

“I love you”, says Jack “I know, you’re crazy” says Annie knowing, of course, that it is she rather than her loyal and devoted husband who is disturbed. And some. The problem is substance abuse and the substances are amphetamines or “Speed” in its street name. Linked with the drug abuse is an eating disorder, bulimia, and this combination makes Annie over-hyped, under-nourished and seriously unstable. “Are you high” says Jack early in the play – in truth it is hard to see that there will be many moments when she is not. Her drug dealer Jeff, a very funny and insouciant performance by Iland Goodman, brings her supplies in industrial quantities.

Jack has won sudden acclaim as the author of a debut novel that leads to an invitation to the Manhattan-view apartment of Stuart the biggest of the big cheeses in the New York publishing world. A huge advance for a second novel is on offer and Jack goes along to the dinner party held in his honour – but Annie comes to. She is, of course, as high as a kite and treats the event and the people with undisguised contempt – but the fact that she does get to the heart of their pretention and vapidity shows her ability to observe and suggests that below the dysfunctional surface there perhaps lies a talented, observant and creative woman. But when Mulholland, the New York Times critic, rants that female authors cannot “write men” Annie ups a gear and calls the publishers “pornographers” – her combination of speed and alcohol not inhibiting her comments or her language.

Mental health is a tricky subject to dramatise – at least to show tactfully and with understanding. In the programme of Good Canary the author reveals that it is part based on a real-life couple (“quasi-savants” he calls them). This shows in the sensitive way he has written Annie – he does not duck her self-destructive character but equally, he asks us to see the real and intellectually formidable person below the junkie’s surface.

That Jack struggles to cope is also sympathetically shown – as is his attempt to “cure” Annie with cold turkey and by cutting off her supplies. He bribes Jeff the dealer to keep away and hopes for a detox that will restore Annie to him. The rest of the play, launched by a surprising plot twist at the end of the First Act, shows how this tactic plays out.

Good Canary works for three main reasons. Firstly the staging and direction is outstanding – this is not conventional theatre as you might expect from the fact that the eccentric Malkovich is in charge! Second the play itself, though a little uneven, manages the difficult task of balancing humour and pathos even when the subject matter is so dark. Thirdly the performances of the whole cast are outstanding with Mavor’s Annie truly brilliant. Annie seems to have no way to resolve the dilemma that she must be the person that Jack wants her to be and yet still retain her independence and her right to choose her own lifestyle, however dysfunctional that may seem to be to others. This anxiety, and the implied struggle to find means to heal herself, threatens to drive her over the top.

Following rave reviews for his first novel, Jack is on the verge of signing a multi-million-dollar deal with a leading publisher. With his wife Annie struggling with addiction and mental illness, will she cope with the public scrutiny that comes with success?

Set in New York, this hard-hitting and darkly witty play explores the spiral of self-destruction and the cost of creativity.

Californian writer Zach Helm has spent years honing his craft in Hollywood and establishing himself as one of the most interesting and promising writers and directors of his generation. His work includes Mr Magorium’s Wonder Emporium, Stranger Than Fiction starring Will Ferrell and Dustin Hoffman, and the forthcoming Jumanji.

Oscar Award nominee John Malkovich’s extensive film career includes Places in the Heart, Dangerous Liaisons, In the Line of Fire, Being John Malkovich and Burn After Reading. His Broadway directing credits include Arms and the Man in which he also performed and The Caretaker.

Age Restrictions:
16+ due to strong language and references to drugs and sex.

Titus Andronicus is not usually a comedy, it is usually a bloody, villainous and vengeful tale, but tonight it is a comedy and a rather amusing one at … END_OF_DOCUMENT_TOKEN_TO_BE_REPLACED

This show is not without clichés - there are three of note in this production. Firstly, the French horn of the show’s title is personified, speaking … END_OF_DOCUMENT_TOKEN_TO_BE_REPLACED

There’s very little in the way of set in this show: aside from chairs, a few crash barriers and at one point, a red carpet, the actors’ movements … END_OF_DOCUMENT_TOKEN_TO_BE_REPLACED

South African born, but raised on the Isle of Man, Pierre Novellie is a true raconteur rather than just another 'stand-up' comedian. He says about his … END_OF_DOCUMENT_TOKEN_TO_BE_REPLACED

This show, Willy Hudson began by saying, is about himself. It is written by himself, is directed by himself and executive produced by himself. Almost … END_OF_DOCUMENT_TOKEN_TO_BE_REPLACED