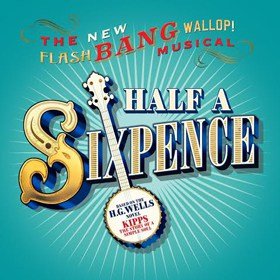 Cameron Mackintosh once wrote that “Musicals are funny things in that those that are most successful are the sum of their collaboration, rather than the single-minded vision of the author, however talented… the heart of a great musical is always a great book, usually adapted from an existing source…” Sir Cameron wrote this before he became involved in the new production of “Half a Sixpence” – he is modestly described as the “Co-Creator” – but its success, one suspects, is very much due to the fact that one of the greats of the modern musical theatre played a major part in the revival. Revival is something of a misnomer in that although the “existing source” is the same – H.G. Wells’s novel “Kipps” – and many of the best songs from the original 1963 production are here this is otherwise a completely new creation. I saw the original in 1963 – it was really a vehicle for Tommy Steele and lively and jolly and tuneful. And Steele showed that at 26 a career beyond the world of pop music was within his reach. He was very good.

The 1963 show (and later film) was written (music and lyrics) by David Heneker who worked at the time at the cusp between popular music and musical theatre. The book was by Beverley Cross, like Heneker a capable but journeyman in the theatre. Since the original production and subsequent film Half a Sixpence has not been performed until now. This suggests that it was seen as a lightweight vehicle for Tommy Steele’s talents but not as a serious player in the world of the musical theatre.

Cameron Macintosh saw that the Kipps story had potential and that the very core of the original musical had merit – but he clearly knew that a new collaboration was necessary if anything was to be made of the idea. No doubt Macintosh’s status and reputation was enough to attract not just the music and lyric writing team of George Stiles and Anthony Drewe (of “Mary Poppins” fame) but also writer Julian Fellowes. The latter, of course, is best known for “Gosford Park” and “Downton Abbey” and is skilled in the “Upstairs Downstairs” world that HG Well’s “Kipps” also inhabits. The new Half a Sixpence is much more realistic than the original in that Well’s interplay between the haves and the have nots is properly explored. The rich and the poor are seen in their separate worlds – rather as in My Fair Lady.

There are equivalents to the workers’ “I’m getting married in the Morning” and also to the Toffs’ “Ascot Gavotte” (etc.) of Lerner and Loewe’s great musical. Similarly where George Bernard Shaw is ever present in My Fair Lady so HG Wells is hovering above “Half a Sixpence” – which I don’t recall him doing in the original!

This is a truly fine musical – with a clever inclusion of a dozen of the big hits from the original (“Half a Sixpence”, “Money to Burn”, “If the Rain’s Got To Fall” and, of course, “Flash, Bang, Wallop” among them). But there are some fine new numbers as well – especially “Pick Out A Simple Tune” which not only is musically clever but also gives us a fantastic ensemble scene early in Act Two. Arthur Kipps is played by Charlie Stemp and a very enjoyable, well-acted and well sung performance it was. There were echoes of Tommy Steele here – and that is meant very much as a compliment. The cast as a whole was terrific. I loved Ian Bartholomew’s Chitterlow and Emma Williams restrained but very sexy “Helen Walsingham”.

In Cameron Macintosh’s “sum of their collaboration” everything has to work, and here it does. The choreography (by Andrew Wright) was breath-taking, the set, with clever use of the theatre’s revolving stage, by Designer Paul Brown was superb and the band – mostly out of sight – was excellent as well.

There is a plethora of new musicals at the moment and they seem to keep revivals a bit away. Yes we have had Guys and Dolls and Funny Girl and a few other genuinely great examples from the traditional musical theatre. But there is also too much dross out there with some “musicals” just vehicles for a songbook – but with no “Book” or story to speak of. “Half a Sixpence” lay fallow for decades – perhaps rightly in its original form. Reborn in this quite brilliant Chichester production it has every chance of taking its place as a classic!

Based on the H.G. WELLS novel
Kipps: The Story of a Simple Soul
And the original musical by
BEVERLEY CROSS and DAVID HENEKER

Half A Sixpence is the iconic British musical adaptation of H.G. Wells’s disguised autobiographical novel Kipps: The Story Of A Simple Soul, based on the author’s unhappy apprenticeship as a draper at Hyde’s Drapery Emporium in Southsea. This new stage version of the novel is a completely fresh adaptation by Julian Fellowes, Oscar-winning screenwriter and creator of Downton Abbey.

Arthur Kipps, an orphan, is an over-worked draper’s assistant at Shalford’s Bazaar, Folkestone, at the turn of the last century. He is a charming but ordinary young man who, along with his fellow apprentices, dreams of a better and more fulfilling world, but he likes his fun just like any other, except not quite.

When Kipps unexpectedly inherits a fortune that propels him into high society, it confuses everything he thought he knew about life. Watching him wrestle with his new identity is his childhood companion and not-quite girlfriend, Ann Pornick, who sees with dismay how Arthur is being made over in a new image by the beautiful and classy Helen Walsingham. She is always there with helpful hints on how Arthur could improve himself and make his life richer and more meaningful, if only he would believe in himself, and listen to her. Both of these young women love Arthur – there is no doubt about that – but which should he listen to? With the help of his friends, Arthur learns that if you want to have the chance of living the right life, you need to make the right choices.

It wasn’t that long ago when anyone who gave warnings about Sleeping Beauty would be dismissed as more than a little ridiculous. The concern is that … END_OF_DOCUMENT_TOKEN_TO_BE_REPLACED

Alby hates themself, but can't work out why, and that irks them, even if they don't quite realise it. In this witty, occasionally unsubtle, but … END_OF_DOCUMENT_TOKEN_TO_BE_REPLACED

I have seen some outstanding acting recently at the intimate Finborough Theatre, and this new play is no exception. The highly talented cast quickly … END_OF_DOCUMENT_TOKEN_TO_BE_REPLACED

In the pandemic (remember that?) I worked in adult social care. My role was to help older people in their own homes with daily tasks - I’d cook meals, … END_OF_DOCUMENT_TOKEN_TO_BE_REPLACED