You are here: Home / Reviews / Review of Henna Nights – Part of the Camden Fringe 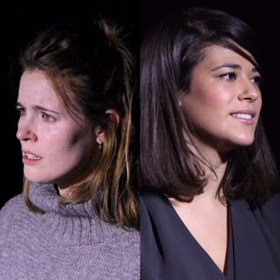 Amy Rosenthal’s two-handed, one act play explores what happens when an ex-girlfriend meets the new/current girlfriend.

The play begins with Judith (Laurie Delaney) lying on her sofa leaving a desperate message on her ex-boyfriend Jack and Ros’s (Celine Abrahams) answerphone hinting that she may be pregnant before ending it with “I went to Boots today and bought a packet of Henna and some razor blades depending on how I feel in the morning, I’ll either slash my writs or dye my hair. Either way, I’ll ruin my carpet”. This “cry for help” message is heard by Ros and she hotfoots around to Judith’s tiny and untidy flat, unsure of what she’s going to find, luckily Judith opens the door to her, polythene bag on her hair whilst the henna takes.

The two women are very different; Judith crazy, chaotic and dressed down, whilst Ros is prim and proper dressed in a trouser suit.

Both Laurie Delaney (Judith) and Celine Abrahams (Ros) give convincing performances and work very well together in bringing Rosenthal’s script to life. Delaney’s tone in the first part of the play is understandably angry and aggressive but not shouty; whilst Celine Abrahams starts out business like and persuasive as she tries to discover if Judith is pregnant “as this would change what is a perfect relationship”. She manages to convey Ros’s more vulnerable/insecure side as she tells Judith of her sometimes awkward meetings with Joe’s friends (including one where she’s called “Jude”!). There are a few humorous lines with the bulk of them going to Delaney who shows excellent comic timing when delivering them. Towards the end there is a touching scene as Ros helps Jude to rinse off the henna.

The set is basically just a couch surrounded by various bits of rubbish which helps to illustrate the turmoil of Judith’s life; the lighting too is modest. Henna Night is thought-provoking and very realistic.

Judith leaves her ex-boyfriend a desperate message on his answerphone saying that she is not coping with their break-up, that she has brought some razor blades and some henna in order to either slash her wrists or dye her hair and she might be pregnant. However, it is his new partner, Ros, who hears the message and it is she that rushes to Judith’s bedsit. An evening of emotion, combined with subtle humour, ensues that will conclude with the two women, despite their differences and rivalry, finding friendship and gaining something positive from each other.

Tickets booked online must be collected 15 mins before showtime. Cash tickets are available for 30 mins at the box office. Over 18’s only, limited access for people with disabilities, no admittance for latecomers.