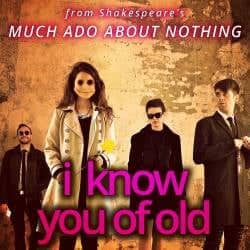 Shakespeare could be said to be the most abused playwright. His plays have been performed a million different ways. In two years I’ve seen six performances of Romeo and Juliet and four of Midsummer Night’s Dream and each one has been completely different to the other. However, when you look at the prose of a Shakespeare play, there is always the possibility to use them and move them around to produce a completely different outcome. Not sure exactly what I mean? Then nip down to the Hope Theatre where Golem is staging I Know You of Old.

Based on Shakespeare’s ‘Much Ado About Nothing’ the play is set in a chapel where a lace draped coffin is sat waiting for the funeral tomorrow. The occupant of the coffin is Hero who collapsed and died when, at the altar, her fiance Claudio (Conor O’Kane) denounced her as a wanton woman. Now although he feels so much sorrow and guilt that he may have wronged the woman he loved. This guilt is made worse by the accusing figure of Hero’s sister Beatrice. It seems the only person that Claudio can turn to for support is his companion, follower, and BFF the well-known playboy Benedick (David Fairs). Benedick tries to cheer up his friend but nothing works until Claudio sees the interaction between Benedick and Beatrice. Even though the two of them fight and spit at each other, like two cats warring over a piece of fish, Claudio decides that to atone for his actions, he will bring these two people together so that love can flourish for at least one of the sisters.

Writer David Fairs has taken Shakespeare’s original text and twisted it to produce this new story of the lives of Hero, Claudio, Benedick and Beatrice. And, as an idea, it works surprisingly well. The play itself is very modern in its setting. Claudio calls Margaret on his phone, there is an iPad with a half finished letter etc. Again, this works well and I have to give a massive bit of praise to Director Anna Marsland for using real candles rather than those battery operated ones that no matter how hard you try look fake. In fact the degree of realism was extremely good, so when Benedick is looking at a video on his phone, it was genuinely there for him – and audience members in the right seat – to see. The audience were ranged either side of the stage area and from where I was sitting, this meant occasionally missing an entrance or reaction when two people were at opposite ends of the room. A minor thing but slightly irritating

The three actors were good in their roles and Conor O’Kane has the most wonderful set of expressions. His grief over Hero’s death is etched in every line of his visage and then, in the comedy moments, he changes again. His face, when Benedick breaks into a Cher song was an absolute picture. There was a nice relationship between all three actors but I think most praise has to go to Sarah Lambie for her portrayal of the haughty, but sometimes awkwardly flirty, Beatrice. Finally, David Fairs definitely has the makings of a great physical comedian especially when he tries to hide.

I Know You of Old is a fascinating example of what can be done by taking timeless text and moving it to change not only the context but also the story itself. Writing it must have been such fun and it would be interesting to know how the creative process worked. Overall, I think it worked pretty well. I did think it was a tad too long and the ending took me a bit by surprise with its intensity in what had been, up to then, a light-hearted romp in many ways. A Shakespearean purist would probably be choking on his mead at what I Know You of Old but they would be mistaken. This is a respectful treatment of The Bard’s words proving the timelessness and fluidity of the text are its greatest achievements.

GOLEM! presents I Know You Of Old, an even more radical return to their adaptation approach after 2016’s Macbeths, also at The Hope Theatre, looking for justice for missing or sidelined characters in Shakespeare’s plays.

Hero is dead. The night before the funeral, the strange circumstances of her death hang in the air – are the rumours about Hero to be trusted? At her coffin, the eye of the storm, her fiancé Claudio is wracked with grief and guilt. When Hero’s sharp-tongued cousin Beatrice arrives, closely followed by notorious playboy Benedick, Claudio sees a way to atone for former wrongs and do one last thing for Hero – he will bring this prickly pair together.

Using only Shakespeare’s original text, David Fairs re-orchestrates Much Ado About Nothing into a new, alternative dark comedy, directed by Anna Marsland, Resident Director of the National Theatre’s The Curious Incident of the Dog in the Night-Time.

GOLEM! presents
I KNOW YOU OF OLD
from MUCH ADO ABOUT NOTHING
Author: DAVID FAIRS and WILLIAM SHAKESPEARE
Director: ANNA MARSLAND
At The Hope Theatre, Islington, N1 1RL

Britain, so a London cab driver once told me, is obsessed with the Second World War, as though it happened just recently. Power Luncheon would seem, … END_OF_DOCUMENT_TOKEN_TO_BE_REPLACED

William J Dunleavy, author and star of this monologue play, is a writer and face to watch. He enters the room (as the staging is more geared towards … END_OF_DOCUMENT_TOKEN_TO_BE_REPLACED

Cirque du Soleil’s Luzia is a joyful whirl through a psychedelic Mexico, which reminds us why live theatre is so special. Anyone who goes to … END_OF_DOCUMENT_TOKEN_TO_BE_REPLACED

I am always very excited to come across a new theatre, and Esher Theatre is a real ‘find’, conveniently situated near to Esher High Street and right … END_OF_DOCUMENT_TOKEN_TO_BE_REPLACED

Cecil Sharp is no unsung hero. Without the energy of this driven and at times prickly musician, the traditional folksong of rural England would very … END_OF_DOCUMENT_TOKEN_TO_BE_REPLACED