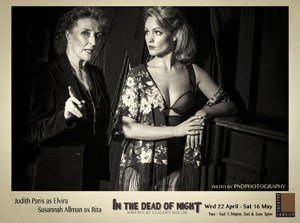 Claudio Macor’s new play is an ambitious and highly successful recreation of the type of story told by the Film Noir filmmakers of the 1940s – with one crucial exception. Whereas directors like Huston, Ray and Curtiz were restricted by the strictest of rules – the Hays Code – no such restrictions, of course, apply today. So, as Associate Producer David Orchard rather gleefully points out in a programme note, “Our play breaks nearly all of the 36 [Hays] rules!”

The setting is New Year’s Eve in a seedy dockyard bar somewhere in the shanty town “La Roca” in South America in 1945. The bar is run by Elvira an ageing “tart with a heart” perfectly portrayed by the excellent Judith Paris. There is drug-running, prostitution, corruption, violence and lots of casual sex – gay as well as straight. The characters are variously damaged by neglect and poverty and find their own ways – mostly illegal – to make money to survive. An air of menace hangs over every scene and you sense that human life is not highly valued and civilised restraints have long since been abandoned. Even the Tequila is hooch from Elvira’s own still. “There will always be a demand for what I supply” says Elvira and there seem to be few limits to what could be available. “I am Queen of my world” she says – and she clearly is.

A central part of the story is Rita, the good time girl who, as Elvira puts it, “… never gets involved – she has no heart”. Susannah Allman establishes the character wonderfully well and looks terrific – and she flaunts what she has in a way that Hays might not have approved of! In fact as the drama unfolds she does “get involved” and we have a “love among the ruins” plot line that is as convincing as it is charming. And part of that is the hope that she will be able to “fight for a new life and leave La Roca”. The feeling of entrapment is ever present. They don’t like their lives, but there seems to be no escape – nor from the sinister threat of “The Cartel”, the gang that runs the place and is threatening to destroy it.

“In the Dead of Night” is a well-crafted and original piece of theatre, tightly directed by the Author and exceptionally well performed by the strong cast. See it if you can.

Unbreakable Elvira is queen of the night in her South American shantytown bar… but it stands on the edge of destruction. Missing for a year, Leandro, son of the local drug cartel boss, returns with chilling news for his lover Massimo and indeed the whole town. Elvira, her old flame Falchi, her protégé Rita, the enigmatic Raul, and the rest of the regulars at Bar Tangueros are dancing toward disaster as classic 1940s film noir drama pulses to a burning Latin rhythm. In the Dead of Night brings the classic dark, steamy atmosphere of film noir to the stage in this tale of eroticism, murder, and power.

As previously announced, choreography of the dance sequences will be by Anthony Whiteman (Bel Ami) and, in true film noir style, composer Paul Boyd (Molly Wobbly) is creating an original score for the play’s incidental music and dance.

This entertaining new musical is very fortunate in having as its leading lady the terrific Katie Elin-Salt: she is onstage almost throughout, singing … END_OF_DOCUMENT_TOKEN_TO_BE_REPLACED

“Keep it shallow, keep it pretty, keep it moving,” declares Justin Vivian Bond, letting the audience determine for themselves what precisely is really … END_OF_DOCUMENT_TOKEN_TO_BE_REPLACED

This play didn’t do that well on Broadway the first time around in 1963, and did worse the second time around, even with a revised script, running in … END_OF_DOCUMENT_TOKEN_TO_BE_REPLACED

One of the very few good things about the COVID pandemic is that the opportunities to live stream theatre performances have increased exponentially, … END_OF_DOCUMENT_TOKEN_TO_BE_REPLACED