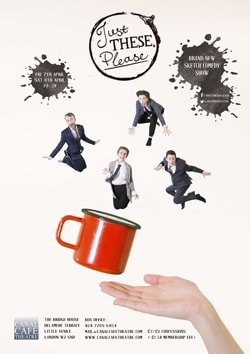 Just These, Please are an exciting foursome presenting new sketch comedy at the Canal Cafe Theatre. Opening with the ‘Animal Kingdom AGM’, a concept I’d love to see them develop even further, the status quo for their show is established and riddled with clever gags and hilarious physicality.

William Sebag-Montefiore is a vocal chameleon to such an extent that I had no idea as to his native accent until the end of the show. He is wonderfully expressive throughout and is especially amusing as the archetypal southern suitor in a brilliant take on classic love at first sight scenarios.

Georgie Jones thrives as the straight man, with a delightfully dry delivery, in a number of the night’s funniest sketches but also proves her knack for the absurd in ‘A Catch Up’. Funny even without words, she demonstrates great physical comedy chops as the mediator between a pair of warring whimsical smoothies.

Tom Dickson plays under pressure very well and does so hilariously. Tom goes from nought to meltdown in three and a half seconds, in hysterical fashion, and has some of the show’s best laughs with his Sergeant Major during ‘The Ambush’ a particular highlight.

Philippa Carson first had me creasing up with her portrayal of Slug, the leader of the Animal Kingdom council and, from that instant on, continued to give a physically explosive performance.

With some of the most bafflingly funny facial expressions I’ve seen in some time, Pip rocketed through the evening with bundles of infectious energy.

With simple costuming and no set, they feel like a team that could assemble and thoroughly amuse an audience almost anywhere. I felt that the transitions could have been snappier or have been helped with some music and I would love to have seen some onstage action to accompany three merrily clever sketches featuring alternative Captain’s Logs.

As a four, they work together brilliantly, with any and all combinations demonstrating solid chemistry and camaraderie. A couple of the sketches may benefit from a little trimming but all are full of gags, both smart and puerile. My personal favourites included an over-committed PA, an insensitive rogue detective and a running gag simply titled ‘Vag’.

Overall, Just These, Please effortlessly prove that they’ve got a really solid foundation with this laugh a minute show. With a few snappy edits and even more of the same comedy cooking pot they’re serving from, Just These, Please have all the potential in the world and everything needed to take the sketch comedy scene by storm.

Just These, Please are London-based sketch comedy group and purveyors of polite wackiness.
Coming fresh from a whirlwind tour of their imaginations, Just These, Please bring their brand new comedy sketch show to the Canal Café Theatre – and you should bring yourselves to see it. It promises to be an evening.

More specifically, it promises to be an evening of hilarity focusing on the hot-button issues of the day, namely: whimsical smoothies, vengeful buttercups and of course, Shaggy.

Harold Shipman, known to his many patients, family and friends as ‘Fred’, was Britain’s worst serial killer. The official inquiry into his crimes … END_OF_DOCUMENT_TOKEN_TO_BE_REPLACED

Being one of Arthur Miller’s best-made and most challenging plays, The Crucible is also one of his most frequently performed. I was going to say … END_OF_DOCUMENT_TOKEN_TO_BE_REPLACED

To be fair, Linda Lavin called her concert Love Notes, there’s an album of the same name, and that’s more or less what it was about - variations on … END_OF_DOCUMENT_TOKEN_TO_BE_REPLACED

Noughts & Crosses is a euphemism for blacks and whites. The Noughts are the whites and the Crosses are the blacks. In the world of the play, the … END_OF_DOCUMENT_TOKEN_TO_BE_REPLACED

This ‘juke box’ musical offers highly polished, undemanding, feel-good entertainment, showcasing, as it does, 30 songs dating from the 1960s to the … END_OF_DOCUMENT_TOKEN_TO_BE_REPLACED