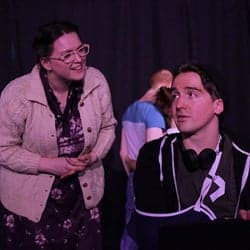 A mixture of mime, dance and words performed by an excellent 4-strong cast, Loop is an exploration of the generation gap issue facing one family over a 50 year period.

The play begins with a beautifully written descriptive, hopeful and often humorous monologue as Woman (Emily Thornton) plans to leave her East London home for what she believes is an exciting new life in Manchester. Thornton’s delivery is excellent managing to give us a real feel of her hope for the future as she makes her journey northward.

Fast forward 20 years to a Manchester nightclub where Girl (Rubie Ozanne) (daughter of Woman) meets Boy (Aaron Price) who she will settle down with. Ozanne and Price work very well together, as the “confident” girl and the shyer boy go from an initial wariness of each other to having a close bond.

Jump another 20 years and Boy and Girl are still together and are the parents of a teenage son “Young Man”. Boy worries that there is something wrong with their son as his spends hours on his computer listening to what he refers to as “noise”. His wife reassures him by saying it’s just a teenage thing. Young Man, like his grandmother before him, yearns to escape his current life for the bright lights of London. Once again a wonderfully descriptive monologue is well delivered by James Dermaine. Following Young Man’s eventful trip to London, the play concludes with a heart-warming scene.

Throughout the play we are treated to a wonderful soundtrack enhances the various scenes/situations. Alexander Knott’s script is excellent. It is peppered with some wonderful, laugh out loud, one-liners as well as managing to include a poignant reference to David Bowie. Zoe Grain’s moves, which are brilliantly executed by the cast, are well timed and help keep the production at a good pace.

A dynamic new play, ‘LOOP’ is a journey through 50 years of life, love & music. Combining a soulful family story with the best songs of the 60s and 80s, through to the grime and rhythm of 2017, it’s a story of people evolving with the music they listen to.

London, 1965. A woman leaves her mother, fiancée and everything she knows behind, to search for something better in another city …

Manchester, 1985. Boy meets Girl under the serious moonlight. For The Boy, music is everything. For the Girl, everything is a new pair of trainers. They dance and fall in love as the New Romantics play, while a woman waits by the phone …

The Present. A Young Man who feels like nobody understands him wants out of his home, his school and his life. His parents just want what’s best. Maybe he’ll find what he’s looking for in the same city his grandmother left 50 years ago….

It is 2002 – another Royal Jubilee year, and HRH (Mary Roscoe) is due to open a new Science wing in a 'sink' comprehensive where Dr Derek Jones … END_OF_DOCUMENT_TOKEN_TO_BE_REPLACED

Dr Anna LaRosa (Dr Stefania Licari) has a lot to say. Just as well, as she’s the only one on stage in this medical comedy, which largely draws its … END_OF_DOCUMENT_TOKEN_TO_BE_REPLACED

Nikhil Parmar’s one-man show, originally written as a TV pilot, manages to touch on a wide range of themes from Islamophobia to modern fatherhood with … END_OF_DOCUMENT_TOKEN_TO_BE_REPLACED

Handel’s 1738 opera Serse (or Xerxes) is an exploration of power, love and human frailty. King Serse falls in love with the voice of his brother … END_OF_DOCUMENT_TOKEN_TO_BE_REPLACED

Lea Salonga has her fans. She also has some superfans, the ones who yell, “I love you Lea!” at almost every opportunity. If that wasn’t enough, there … END_OF_DOCUMENT_TOKEN_TO_BE_REPLACED