Home » Reviews » Review of Moments at The Hen and Chickens Theatre 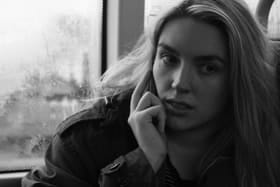 Part of this year’s Camden Fringe and written by and starring Julia Cranney; Moments is a witty, one-act play which explores loneliness in a big City (London).

Twenty-six-year-old Ava (Julia Cranney) has recently moved from the North of England to London where she works in a Call Centre. Daniel (Simon Mattacks) is 52 and works a security guard who has recently separated from his wife. It is during their daily bus commute to their various workplaces that they first meet. Following several brief conversations the longest of which is after Ava drops her shopping bag and Daniel comes to her aid; are this unlikely couple about to become friends?

A lot of the play’s storytelling is done by a very basic style of narration. This narrative could easily become repetitive and boring. However due to the clever way the actors play out the narration by using some well timed expressive looks/mime this does not happen, although it does help to show how lonely Ava and Daniel’s lives were becoming.

Julia Cranney manages to convey Ava’s weariness of life in London after a few months extremely well. Managing to show her proud streak as well as her more humorous side (her “bigging” up her life in phone calls home to her parents are particularly well done).

Simon Mattacks is good as the slightly more open, chatty, yet somehow just as vulnerable, Daniel. The pair have good chemistry as the two characters share a few awkward conversations (one of which is a rather surreal conversation about eggs). Eventually, they have a proper conversation at an unlikely meeting place. This meeting between the two includes a great twist which manages to turn their situation bittersweet.

Richard Speirs direction is well paced and like the narration helps give believability to both the couple’s
loneliness and unlikely friendship.

Moments is an enjoyable thought-provoking play with a lovely final scene which should ensure you leave the theatre with a smile on your face!

Daniel and Ava have nothing in common. He’s 56, she’s 25. He’s a talker, she’s a listener. But after a series of chance (and awkward) encounters, it’s starting to look like they’re becoming… friends?

From award-winning writer Julia Cranney, Moments is a delicate, funny and moving exploration of modern loneliness and friendship in a big city.

This happens to be a timely production: employment has hit the headlines again at the time of writing, this time because of the concept of ‘quiet … END_OF_DOCUMENT_TOKEN_TO_BE_REPLACED

An opera (well, technically, an ‘opéra comique’, as there is spoken dialogue) in a relatively small space like the Charing Cross Theatre calls for … END_OF_DOCUMENT_TOKEN_TO_BE_REPLACED

Shoes, one would have thought, are fairly recession-proof. The problem for Charlie Price (Joel Harper-Jackson, reprising the role he previously played … END_OF_DOCUMENT_TOKEN_TO_BE_REPLACED

The descriptions of what happens in this show are so vivid that paradoxically they leave nothing to the imagination – and, at least at the performance … END_OF_DOCUMENT_TOKEN_TO_BE_REPLACED