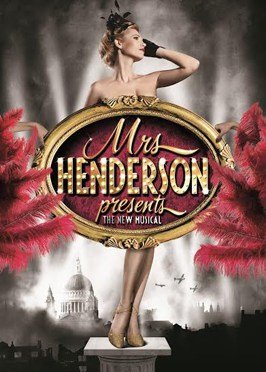 The mystery is why such an obviously – and literally – theatrical piece such as Mrs Henderson Presents has taken so long (ten years) to get from movie to West End musical.

Mrs Laura Henderson is the 70-year-old wealthy widow who, knowing nothing whatever about theatre, took over the ailing Windmill Theatre in the 1930s and placed it firmly on the map by presenting, uniquely, all-nude tableaux vivants featuring lovely young naked women posing motionless on stage in the manner of great works of art by Rubens, Renoir and so on.

She begins by hiring a professional theatre manager named Vivian Van Damm, with whom she is at immediate loggerheads, and when the non-stop revue they initially present starts losing them money she has a brainwave – gloriously illustrated on stage by a light bulb popping on right by her head – that in order to save on costumes they can dispense with costumes altogether. Next she has to persuade the girls to perform nude, with the promise of 30s a week (not bad for those days). Then lacking a centrepiece for the show Van Damm spots the lovely but ordinary Maureen, the tea girl, and persuades her to join the troupe. From tea girl to star – hoorah!

In one hilarious scene, striking a blow for feminism, the girls refuse to derobe until the boys have done the same, which causes understandable consternation and a bit of on-stage male nudity (with hidden bits). But when it comes to the girls’ own staging nothing is hidden from the public eye.

The tableaux are punctuated by a comedian – James Foreman in lurid tie and matching socks – telling bad jokes. (Household names such as Tony Hancock and Tommy Cooper cut their teeth at the Windmill in the fifties, and they knew perfectly well nobody had come to see them.) War comes and bombs fall close by. But the show must go on, and as we all know, the Windmill was the only theatre that kept going throughout. (‘We’ll Never Close’.)

The story is a load of old cobblers, as any one of the characters in the show might have said, but it is performed with such panache and skill and wit, it’s very hard to resist. The tunes, by George Fenton and Simon Chamberlain, range from jaunty to soulful, always sounding authentic if not necessarily memorable. Tracie Bennett gives the oddly underwritten role of Mrs Henderson the right amount of vivacity and acid wit, even if she is twenty years too young.

Ian Bartholomew makes possibly more of Vivian Van Damm than is in the script, but the standout performance is Emma Williams as Maureen, who manages to transform herself from clumsy tea girl (I’m just an ‘Ordinary Girl’) to star of the show and make it look utterly believable.

There are some clunky plot moments, not the least of which is the scene where the pregnant-but-not-yet-showing Maureen reappears on the roof of the Windmill – where Mrs Henderson, defying the bombs, has settled herself in a deck chair by a prop moon and resignedly signs the notice handed her by Van Damm closing the show – and revitalises both producers and show with a cheesy number called ‘If Mountains Were Easy to Climb’. (The show must go on!) But there are glorious moments too, in particular when Van Damm appears, as war breaks out, sporting the Star of David on his sleeve and sings bitterly about ‘Living in a Dream World’. There’s a touch of theatre magic in Mrs H’s quiet, if self-mocking assertion that she really did believe that what they were doing wasn’t unimportant, that they really were helping to take people’s minds off the horrors surrounding them.

There’s a wonderful a capella moment in a song ‘Women at War’ sung by the women (and men) sheltering in an underground shelter. And there is something surprisingly moving about watching a totally naked Maureen, downstage centre, defiantly telling the Germans to get back where they came from. (Or as the sparky song ‘He’s Got Another Think Coming’, performed with spoons, says – ‘They can turn their Fockers around’.) It’s also Maureen who’s given one of the best come-on lines ever when she asks her boyfriend, on leave from the war, ‘Do you want to go down to Covent Garden and watch the cabbages come in?’

It is great credit to the director Terry Johnson, who also wrote the book, that the nudity is never smutty. The tableaux are genuinely beautiful and if the show doesn’t exactly break new ground (except for the nudity) it certainly pleased the audience. As British as Marmite and as old-fashioned as a wind-up wireless, it is what it sets out to be: a thoroughly enjoyable night out.

Mrs Henderson Presents
It’s London, 1937, and recently-widowed eccentric, Laura Henderson, is looking for a way of spending her time and money when her attention falls on a run-down former cinema in Great Windmill Street. Hiring feisty impresario Vivian Van Damm to look after the newly renovated Windmill Theatre, the improbable duo present a bill of non-stop variety acts. But as war looms something more is required to boost morale and box office… When Mrs Henderson comes up with the idea of The Windmill Girls – glamorous young women posing as nude statues – audiences flock. And as the Blitz hits London, The Windmill provides a refuge for all, boasting the spirit-raising slogan “We Never Close“.

Age Restrictions: Please note that an age restriction is not in place for this production.
Important Information: Contains scenes of nudity.

Titus Andronicus is not usually a comedy, it is usually a bloody, villainous and vengeful tale, but tonight it is a comedy and a rather amusing one at … END_OF_DOCUMENT_TOKEN_TO_BE_REPLACED

This show is not without clichés - there are three of note in this production. Firstly, the French horn of the show’s title is personified, speaking … END_OF_DOCUMENT_TOKEN_TO_BE_REPLACED

There’s very little in the way of set in this show: aside from chairs, a few crash barriers and at one point, a red carpet, the actors’ movements … END_OF_DOCUMENT_TOKEN_TO_BE_REPLACED

South African born, but raised on the Isle of Man, Pierre Novellie is a true raconteur rather than just another 'stand-up' comedian. He says about his … END_OF_DOCUMENT_TOKEN_TO_BE_REPLACED

This show, Willy Hudson began by saying, is about himself. It is written by himself, is directed by himself and executive produced by himself. Almost … END_OF_DOCUMENT_TOKEN_TO_BE_REPLACED