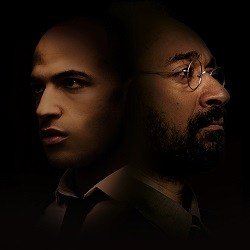 With a season of hard hitting Productions at it’s core, Tristan Bates Theatre has really brought a lost treasure to the ocean’s surface with Athol Fugard’s My Children! My Africa! Presented by Two Shed Theatre. Being performed in London for the first time in 25 years is quite astounding, but perhaps makes its return all the more welcome.

Young man Thami (Nathan Ives-Moiba) has great potential, intellectually gifted, great wit and the support of a dedicated teacher Mr M (Anthony Ofoegbu) but being black and living in the location in the South African Apartheid in 1984 has torn his loyalties and complicated any dreams he may possess. The wire fence that the audience watch the play through is a clever touch by the Directors Roger Mortimer and Deborah Edgington, as it represents a sense of segregation even though the performances on stage create an intimacy with the characters’ lives.

Mr M is a captivating presence due to a masterful performance by Ofoegbu who slides between an array of emotions most notably passion for the human mind and it’s use as a weapon instead of physical violence, his forward thinking is that he will make his young students equipt to change their country for the better with their minds. Ofoegbu describing hope as an animal and exclaiming the line “I feed young people to it” was a heartbreakingly powerful moment in the play assisted by lighting designer Jack Weir’s haunting effects.

There was a great chemistry between plucky white student Isobel (Rose Reynolds) and Thami with Reynolds’ portraying naivety and longing perfectly with their bubbling under the surface relationship, which was later labelled just as friendship by Thami. Ives-Moiba transitioned between the larger than life personality the audience is introduced to in the beginning of the play to the cold and brainwashed empty vessel we see in the latter stages. The comedic content delivered with such wit by Ofoegbu with his ‘team’ of Isobel, Thami and himself was a pleasure to watch with Fugard creating some tender moments in these scenes.

My Children! My Africa! is a window in to history of the South African Apartheid, with its mixture of humour and tension it is a powerful story. Perhaps the monologue sections are at times a little too long in length, but in a production that has such a shining cast their expertise brought every word that they spoke to life, to the point where it felt as if it was the audiences Africa too.

South Africa, 1985 – the fourth decade of apartheid. Two opposing forces struggle for the soul of Thami, a young, brilliant black man. His teacher insists that education, even the inferior “Bantu” education he is forced to teach, is the way to liberation. But Thami has begun to listen to angrier voices…

Britain, so a London cab driver once told me, is obsessed with the Second World War, as though it happened just recently. Power Luncheon would seem, … END_OF_DOCUMENT_TOKEN_TO_BE_REPLACED

William J Dunleavy, author and star of this monologue play, is a writer and face to watch. He enters the room (as the staging is more geared towards … END_OF_DOCUMENT_TOKEN_TO_BE_REPLACED

Cirque du Soleil’s Luzia is a joyful whirl through a psychedelic Mexico, which reminds us why live theatre is so special. Anyone who goes to … END_OF_DOCUMENT_TOKEN_TO_BE_REPLACED

I am always very excited to come across a new theatre, and Esher Theatre is a real ‘find’, conveniently situated near to Esher High Street and right … END_OF_DOCUMENT_TOKEN_TO_BE_REPLACED

Cecil Sharp is no unsung hero. Without the energy of this driven and at times prickly musician, the traditional folksong of rural England would very … END_OF_DOCUMENT_TOKEN_TO_BE_REPLACED