Home » Reviews » Review of A Calling at the Etcetera Theatre 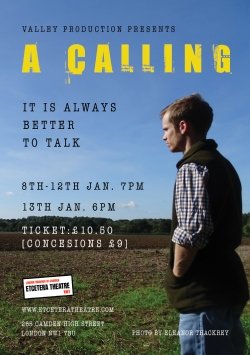 Is the proverbial grass always greener on the other side? For some who have lived in London or in other major urban areas, there’s a desire to, in the words of a television show, ‘escape to the country’ to have more room – or, rather, room in the first place – and less frantic activity. Others may even feel forced out of the city to the suburbs or even further afield, property prices being what they are. Then there are people close to Mark (Aidan Valentine), who want the urban life. Mark works on his family’s Suffolk farm under his Dad (Ed Bailey). His sister Charlotte (LJ Reeves) has come back to the family home for a holiday from her new life in Manhattan. His partner Harriet (Nichola Woolley) holds down a job she enjoys and has been offered a promotion. Hooray! But there’s a snag: the new job will require her to relocate, and therefore if she and Mark are to remain together, he will need to relocate too.

Mark’s best friend Joe (Huw Brentnall) suggests he goes for it, because love is love and all that. But Mark has other things on his mind, including his palpable passion for farming and his frustration that the work the agricultural industry does for this country is often underacknowledged, if acknowledged at all. The urbanites want, in Mark’s view, lower and lower prices at the supermarket, with little, if any regard or appreciation for the hard work that, day in and day out, farmers do to keep those shelves stacked as regularly as they are. Beyond this, there are family issues that are not spoken about, and therefore not dealt with.

The action of the play takes place entirely in the kitchen of the family home, with the kitchen table being the most prominent piece of the set. Some expense has gone into bringing the script to life – when Mark and Joe go out to a fancy-dress function (industry-related, from what I could gather), the audience gets to see their costumes, and there are various items brought into the kitchen that only serve to demonstrate their way of life. Like father, like son, Mark throws himself into the daily functions of the farm without wanting to stop to chat to Charlotte for even half a minute, like the woodcutter who found himself working harder and harder to achieve the same results day after day, because he never stopped to sit down and sharpen his axe.

The ‘otherness’ of this play’s setting, at least for those in the audience who live within a reasonable distance from the bustling Camden Town, allowed for an ‘outside in’ look at proceedings. Given the increasingly darker narrative, the distancing effect created by a portrayal of life markedly different from how things are in London helped to appreciate and understand the positions the show’s characters find themselves in. Dad’s near-perpetual positivity about the future prospects for the farm are on one level admirable, and on another level reminiscent of the repeated line, “This time next year, we’ll be millionaires” from BBC Television’s ‘Only Fools and Horses’.

This isn’t the first play to come along with a no holds barred demonstration of the consequences of not communicating openly and honestly with those whom one loves. By the curtain call, there were still some significant unresolved issues – there’s enough material for a sequel to this play. The complexities faced by Mark are compelling, if a tad uncomfortable, to witness. There may be some plotline predictability in a resolution of sorts to some of the issues Mark had been dealing with, but there is nonetheless plenty of food for thought in this intricate and intriguing story.

Mark, a young man in 21st Century Britain, is struggling. In a small rural farming community he’s trying to juggle work, family, friends and a relationship. Looking at how family traditions can shape your life, how stressful the modern farming industry can be and how we hide from opening up about our struggles. Will he give up everything that generations of his entire family have worked for?

Like The Merchant of Venice, with its profound antisemitism, and the misogynistic Taming of the Shrew, Othello is one of Shakespeare’s most … END_OF_DOCUMENT_TOKEN_TO_BE_REPLACED

If the situation in Have I None is really going to be what the future is like, I don’t want it. Sara (Abigail Stone) is cooped up at home, and the … END_OF_DOCUMENT_TOKEN_TO_BE_REPLACED

Male bonding contains seeds of sacrifice and understanding to rival any Christian religion's tenets of divine hope and compassion. And in a play about … END_OF_DOCUMENT_TOKEN_TO_BE_REPLACED

I hugely enjoyed The Shawshank Redemption. This 2009 adaptation by Owen O’Neill and Dave Johns is based not on the 1994 Columbia Movie but on Stephen … END_OF_DOCUMENT_TOKEN_TO_BE_REPLACED

This play is, I must admit, intriguing stuff. Michael Aleen (Gwithian Evans) is a patient in a secure psychiatric hospital - and that is the correct … END_OF_DOCUMENT_TOKEN_TO_BE_REPLACED