You are here: Home / Reviews / Review of Anything With a Pulse at Edinburgh Fringe 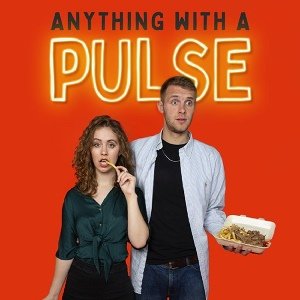 It would take the kind of staging available to the likes of the National Theatre, Curve Theatre Leicester and Chichester Festival Theatre to fully dramatize every scene in Anything With A Pulse. It’s a play that has garnered some interest – even on a dreary Monday afternoon, as I sat in the foyer people were approaching the box office with a view to buying tickets for this performance only to be told it had sold out. Granted, it was probably the smallest of the Fringe venues I’ve ever been in, in terms of seating capacity, but this was a show with big hearts.

What to do, then, without a stage revolve and bits of set flying in and out? Go heavy on description – and this production does so at such a breakneck pace I struggled to keep up with who was sleeping with whom. This is all very much a portrayal of life for the kind of young adult who hasn’t found ‘the one’ and goes to nightclubs, primarily to party, but with an open-mindedness towards encountering someone with whom they could get some bedroom activity out of, and more besides. Almost everything is described in such meticulous detail it effectively leaves very little to the imagination, but at least everyone’s on the same page, assuming they can keep up with it all, and as I say, I wasn’t always able to do so.

Such is the way of ‘work hard, play hard’ city living for younger people. I’m really not inclined to even attempt to name who was shackled up with whom and who had split up, suffice to say there’s a Cassie, a Bradley, a Greg, a Sam, a Tara and several others besides, all played by Rufus Love and Annie Davison between them. One of Davison’s lady characters concluded that relations with one of Love’s men was “nice”, though her facial expression was apparently less diplomatic. Sometimes, the humour in the play is in the delivery of an opinion being expressed, the characters usually adopting a cynical stance. Other times, however, there’s a description of something rather random. One guy was “trimming his pubic hair in the cubicle of the pub toilet”. A woman “says some beautiful shit when she’s drunk”. Let’s just say character underdevelopment is neither here nor there in this instance.

Elsewhere, the awkwardness of those first dates is captured brilliantly. The reticence is inherently British through and through, with people implicitly expected to read between the lines. There are no great moralistic messages here (well, there’s a small one, in the form of the question, “How is it possible to feel this distant to someone you have just slept with?”) but in capturing the vulnerabilities and insecurities of various characters, the audience wills the pair to rekindle a fire gone out: whether they do would be giving too much away.

There’s plenty of movement to enjoy in the form of dancing to nightclub anthems and jumping about (look up ‘Mr Brightside’ by The Killers: used in this play, the lyrics are quite apt). It may be crude at times, but this production is also refreshingly and disarmingly honest. An energetic and dynamic production.

A man and a woman meet in a club. Spotting each other from across the dance floor, they hit it off. Their story should be simple enough. But in a world where we hide behind games and personas, it doesn’t always play out like that. He desperately tries to fit in with his macho group of friends, who happen to be ‘some of the biggest dickheads to grace this planet’. And she is torn between feeling comfortable with the unexciting ‘nice guy’, or facing the games and pretences of modern dating.