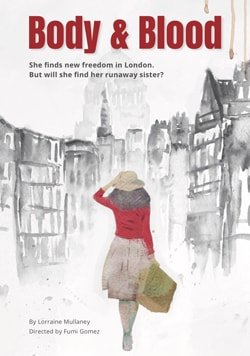 Written by Lorraine Mullaney and set in rural Ireland/London in 1956, Body & Body considers whether we should sacrifice personal happiness for family duty.

Twenty-two-year-old Aileen (Pamela Flanagan) has left her strict family behind and has headed to London to find her younger sister. A sister who has fled the family home in an attempt to avoid an arranged marriage to an elderly farmer who has “a face like the Turin Shroud!” On arrival, Aileen heads to her Uncle Colm (Luke McGibney)’s flat. Despite a few misgivings, her uncle allows her to stay introducing her to Jimmy (JB Newman), a young man he knows. All is going well for Aileen until her mother, Pegeen, (Sorcha Brooks) arrives.

Whilst all of the four-strong cast are excellent; the standout performance came from Flanagan who delivered her lines extremely well. Flanagan’s chemistry with Newman was excellent and enhanced the telling of the story of the cute, but often cheesy relationship between Aileen and Jimmy. A couple of their scenes which I particularly liked were when Jimmy tries to encourage Aileen to forget her often strict Irish upbringing behind and go dancing. She tells him she does dance and dances her favourite Irish dance for them. Jimmy then teaches her a different type of dancing before the two share an energetic rock jive. Newman’s performance is also good, he manages to convey a touch of the Irish charm with his delivery; he also showcases his musical side by playing the guitar and singing Irish style ditties at the start of some scenes. Sorcha Brooks also gives a solid performance as Aileen’s prickly, God-fearing mother. Luke McGibney’s portrayal of the slightly mysterious Uncle Colm is good too. Brooks and McGibney work well together as siblings who have a fractious relationship. We then fast forward 30 years to 1986 for the play’s final touching scenes.

I thought Body & Blood was an entertaining way to spend an hour and an excellent production to start Kings Head Theatre’s Festival 47.

Body & Blood tells the story of an Irish girl who arrives in London in 1956 looking for her sister, who has run away from Ireland to escape an arranged marriage with a man “with a face like the Turin shroud”. But, instead of finding her sister, Aileen meets Jimmy, Uncle Colm’s young drinking and betting partner. Jimmy shows her a new side of life, full of freedom and possibilities. Will Aileen choose this new life or return to Ireland and make the sacrifices required to stay true to her roots?

The drama explores the conflicts and culture clash that result from migration and the pull of traditional Irish values. With Ireland recently electing its first openly gay prime minister, the play highlights how far Ireland has come since the 1950s.

Second-generation Irish writer, Lorraine Mullaney says: “When my mother got engaged to my father in 1960, my grandmother told her she’d come to her marriage with my grandfather with a dowry and cows but my mother had come to hers with nothing. The story always fascinated me.”

There’s a warm and welcoming presence about Katie Arnstein anyway, although offering a sweet to audience members as we filed in helps too. Also, the … END_OF_DOCUMENT_TOKEN_TO_BE_REPLACED

The on-stage tiling makes it feel very much like certain scenes are set in a swimming pool, which may be stating the obvious but in a performance … END_OF_DOCUMENT_TOKEN_TO_BE_REPLACED

“I am a little bit of a nerd,” smiles Joe Sellman-Leava, playing himself, or at least a version of himself he’s willing to portray to audiences at the … END_OF_DOCUMENT_TOKEN_TO_BE_REPLACED

This is the kind of show that will preach largely to the converted, if not the choir itself, although this is probably by default rather than design. … END_OF_DOCUMENT_TOKEN_TO_BE_REPLACED

Cabaret is not just the name of a highly successful musical and film, but according to my good buddies at Wikipedia is a form of theatrical … END_OF_DOCUMENT_TOKEN_TO_BE_REPLACED