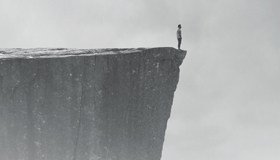 The first word in Brad Birch’s remarkable new play is “So” spoken by the central character Nick: “So it starts like any other day”. Birch clearly has a good ear for language and he refers here to that strange modern affectation of using the word “So” gratuitously at the beginning of a sentence. This is an uber-modern (there I go!) play which among its many other virtues records the argot of today meticulously. Peter Hall convincingly argued that form and structured language give freedom to power of thought and feeling and that this applies to all dramatic work – from Shakespeare to Pinter or even Opera. So (!) we are here very much in the contemporary world of 2016 with many of the linguistic conventions of these times. And that convincing structuring frees up some powerful and stimulating and disturbing ideas all placed in a framework which also includes high comedy – mostly comedy of language rather than of action.

Nick, a truly excellent performance by Ciarán Owens, is troubled by a recurrent dream in which the school at which he is a teacher is destroyed by a bomb which, in the dream, he is told has come from “the Brink”. And he doesn’t know what that means. The dream is affecting his relationship with his girlfriend Chloe (Shvorne Marks). What he sees in the dream is “… enough to get me out of bed and want to sit in the dark on my own.” Chloe thinks that Nick and she are in a state of depression and “stasis” and that they haven’t moved on from when they lived in a student house at University. They should be more like “…Yani and Tim. They bought a house and they’re not depressed.” To which Nick replies “Buying houses…Were not Tories, Chloe”!

At his school Nick is close to another young teacher Jo (Alice Haig) and they reveal some of the problems facing teachers today “Parents are sacred” – this being enhanced by the character of the Head Teacher “Mr Boyd” who when Nick asks him “… what’s wrong with me” says “You’re a very modern man, Nick… A little anxiety is good for you. Keeps you on your toes.” Here the language establishes the character again. “Keeps you on your toes” is the antithesis of modern speech – it sounds like it drifted in from the 1950s which perhaps is exactly what “Mr Boyd” intends. He then adds to Nick’s anxiety by saying “You’re twenty-eight. You’ve probably got where you’re going. You don’t feel like you’re getting anywhere because you’re already there.” Hardly words to encourage a man struggling with uncertainty, delusions and possibly clinical depression!

“Mr Boyd” is played by Vince Leigh who also plays Martin, Chloe’s boss and an unnamed student late in the play – three utterly different roles which he switches between with skill. Indeed each of the actors other than Owens plays more than one role so a cast of four covers eight roles. Mr Boyd says that Nick “pranked me” when Nick talks about his bomb dreams – again a use of semi-archaic language to reinforce the divide between them which is mush greater that the actual fifteen years.

Boyd is not just older but has bought into the required structure of teaching which requires him to subvent power of thought and freedom to pragmatism. “The bomb” is, I think, a metaphor for something – an event or an unexpected change – that can alter the status quo – the “stasis” as Chloe calls it. Boyd says “It’s not the bomb itself I’m worried about. Enough damage can be done with the word alone”. The power and threat of language again.

And particularly in a school where “Parents expect schools to be a refuge from today”. With Chloe and with Boyd and later with Jo Nick can find no basis for dialogue – a basis which would allow active listening rather than exchanged disconnected statements. There is an example of this when in a hilariously funny monologue Jo tells the story of the effects that a bad fish meal had on her and her partner Thom. In graphic detail we follow the rapid passage of the fish through their alimentary canals – all this while Nick looks blankly on wanting to discuss his problems – including his dream/reality belief that there is a bomb under the school. Here once again the language, the banal story and the self-preoccupation destroys the possibility of proper dialogue.

As the play develops the absence of effective communication between the adults is thrown into relief by Nick’s developing relationship with Jessica one of his students. This connection is open and two-way which is clearly refreshing to Nick who finds nobody previously has taken him and his concerns/obsessions seriously. She says “We want our teachers to tell us the truth” to which Nick replies “I don’t know if I’m allowed to do that”. The language and situation might theoretically allow that, but not the selective rules which apply to what you are allowed to say.

The play moves to a resolution via Nick’s suspension “it didn’t feel right to have you in the classroom” as Boyd puts it. At the same time his relationship with Chloe is collapsing – especially when he has to behave when invited with Chloe to dinner at her boss Martin’s house. There is a superbly comic scene when Martin moves into self-congratulatory mode crowned by the patronising “Nick’s hitting on a good point actually. There’s nothing wrong with being honest about one’s shortcomings”. Not that Martin clearly believes he personally has any!

For Nick the dreams are difficult but the reality worse. Inevitably there is a merging of the two with the language becoming nothing more than a shallow substitute for proper communication and for honesty. The Dystopian world of the dreams merges with the supposedly real world of his relationships and his school. There is ambiguity and “nothing is but what is not”. But shining through in this remarkable play is the world of subterfuge and obfuscation all masked by linguistic and behavioural conventions. Nick, on the edge and near to the brink, is either the lone voice of sanity or a suitable case for treatment.

History teacher Nick is on the edge.
A hidden secret lies under the Brink. Nick can’t get it out of his mind. A series of visions force him to investigate what lies beneath. Nick’s girlfriend doesn’t understand. Neither do his fellow teachers. Frustrated, he confides in a Year 10 student but can she be expected to have all the answers?

A co-production between the Orange Tree Theatre, W14 Productions and Theatre Bench, in association with the National Theatre Studio: The J.P. Morgan Award for Emerging Directors production

It wasn’t that long ago when anyone who gave warnings about Sleeping Beauty would be dismissed as more than a little ridiculous. The concern is that … END_OF_DOCUMENT_TOKEN_TO_BE_REPLACED

Alby hates themself, but can't work out why, and that irks them, even if they don't quite realise it. In this witty, occasionally unsubtle, but … END_OF_DOCUMENT_TOKEN_TO_BE_REPLACED

I have seen some outstanding acting recently at the intimate Finborough Theatre, and this new play is no exception. The highly talented cast quickly … END_OF_DOCUMENT_TOKEN_TO_BE_REPLACED

In the pandemic (remember that?) I worked in adult social care. My role was to help older people in their own homes with daily tasks - I’d cook meals, … END_OF_DOCUMENT_TOKEN_TO_BE_REPLACED