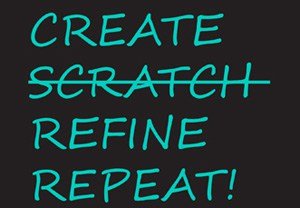 The inaugural Scratch Night at Morley College – or, to give it its full name, Create, Scratch, Refine, Repeat! – featured four theatre companies preparing to take their shows to the Edinburgh Fringe Festival this summer. Each company performed fifteen minutes of their work, giving the audience a taste of what’s to come. Then they invited feedback on what we’d seen, through a list of questions covering everything from ‘What five words would you use to describe this show?’ to ‘What do you think will happen next?’

The four pieces are all very different in style and content, covering a wide range of issues and themes. The evening began with a performance from the Lecoq trained female theatre group, Created a Monster. I’ll be honest; their offering, Room, wasn’t my favourite, but I think that’s just because it’s not really my kind of theatre. It’s a physical, tortured piece, with some very surreal elements, considering the meaning of sanity. The three actors give powerful performances, and their distress and panic are clear to see, and feel.

Some light relief was needed after Room, and it came in the form of To She or not to She, a one-woman show performed by Emma Bentley of Joue le Genre. She plays a spirited fourteen-year-old version of herself, eager to play the meaty role of Hamlet in a school production, but relegated instead to the part of Ophelia. The play is laugh-out-loud funny, with plenty of references for Shakespeare aficionados like me, but it’s also a thought-provoking examination of the limitations placed on women playing male roles in theatre.

The third performance, Labels, was another solo act, this time from Worklight Theatre’s Joe Sellman-Leava. Beginning with some scarily accurate impressions of politicians past and present addressing the issue of immigration, he moves on to a discussion of how and why we feel a need to label people – by race, gender, sexuality, class and more. What made this piece great, for me, was the use of the actor’s own family history to illustrate the point. Labels is an honest and intimate piece of work, full of gentle humour yet with an intensity that makes you sit up and listen.

And finally, the evening concluded with Selah Theatre Company’s spoof TV chat show, The Thomas Clifford Show. Presenting his tenth anniversary programme, larger-than-life host Thomas interacts directly with members of the audience (front row beware) before bringing out his three guests. This is a humorous and energetic play, including several improvised segments, which examines the nature of fame and what it really means to be a celebrity. The extract performed also ended on a cliffhanger, leaving me wanting to know more…

Each of these plays will be heading to Edinburgh this summer, to be performed in their entirety, and one, chosen by tonight’s judges, will be returning to Morley in July for a full performance. If I had to choose a personal favourite, it would probably be To She or not to She, because I’m a Shakespeare geek – but all the work on display was enjoyable, insightful, and more than worthy of its place in the line-up.

Four theatre companies were selected to perform new shows before they are taken to the Edinburgh Fringe Festival in the summer. Create, Scratch, Refine, Repeat is a brand new competition launched to celebrate our new Making Theatre courses which will start in September 2015.
www.morleycollege.ac.uk/

People are like swans. Hopefully, that’s got your attention and while you may be questioning my statement, it is true.  We all have a surface that we … END_OF_DOCUMENT_TOKEN_TO_BE_REPLACED

In case anyone in the audience didn’t know what a toilet looks like, a neon sign reading ‘Toilets’ hangs in between, well, two toilets. There probably … END_OF_DOCUMENT_TOKEN_TO_BE_REPLACED

Dolly Parton’s musical 9 to 5 sets out to do one thing: ENTERTAIN, and it does this superbly. The show has just started an extended tour at Wimbledon … END_OF_DOCUMENT_TOKEN_TO_BE_REPLACED

I feel so comfortable here in this large airy Church, seating is socially distanced and face mask compliance is at a level that some large West End … END_OF_DOCUMENT_TOKEN_TO_BE_REPLACED