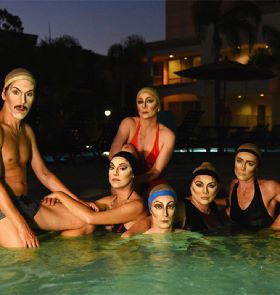 Beginning with impromptu portrait drawings handed to audience members and immediately followed by Ikebana, harmonious Japanese flower arranging, Creation is comprised of a series of highly accomplished and short-lived artworks made live on stage and accompanied by spoken commentaries or reflections on the act of looking, the conception of beauty, and the relationship between artist, object, and viewer.

Such is the acuity of the observations, at times Creation resembles an episode of John Berger’s Ways of Seeing or one of the BBC Reith Lectures given by a prominent artist or art historian. The constantly fluid stage design of Lena Mody and ever-changing mise en scène, using mirrors, frames, screens, flowers, and multiple costume changes, for example, invites the audience to question their own preconceptions about art and beauty, offering them multiple viewing points, often of the same image – something particularly facilitated by the highly skilled use of video cameras and live projection.

The show is far more than a live lecture in art appreciation, though, and its wry use of witty conversation and bathos give it a generous heart. The intimate and familiar relationship between the three Gob Squad performers, each quietly making amusing digs at one another’s expense, exemplifies the fact that they are the first to offer themselves up for scrutiny, often involving themselves in the live artwork being created and exploring contradictions in their own personalities, rather than remaining removed commentators. That said, Sean Patten, Sarah Thorn, and Bastian Trost do an astounding job of arranging the inventive chaos on stage, and, as they say themselves: “It doesn’t need to be neat and tidy all the time.”

The use of six ‘guest performers’ as live material to sculpt and play with also provides both hilarity and pathos in equal measure, allowing the play to comment on contemporary issues such as fickle millennial culture, artistic consumerism, and racial or gender stereotyping. As the show develops, the touching personal autobiography of each person is delicately drip-fed to extremely effective and moving dramatic effect.

Creation, then, is a beautiful whirlwind of interconnected but transient artistic set pieces that combine to make a truly stunning piece of performance theatre.

Creation is the realm of gods and artists, who create beauty through sheer will and their own bare hands. But who decides what is beautiful?

Creation (Pictures for Dorian) is inspired by Oscar Wilde’s iconic character Dorian Gray, who remains eternally youthful at a terrible cost to his soul. There’s probably a little bit of Dorian in all of us. Joined onstage by older and younger local performers, Gob Squad peeps behind the vanity mirror to question beauty, morality and power – and ask why we so crave the eye of the beholder.

British/German arts collective Gob Squad have performed all over the world for 25 years. Now middle-aged, they have no desire to exit the stage just yet.