Home » Reviews » Review of Daphne at the Arcola Theatre – Grimeborn 2015 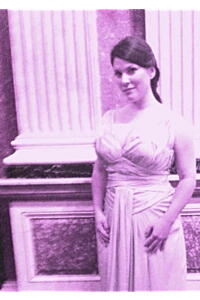 When Daphne is alienated by a society she cannot understand, she turns, instead, to nature. Strauss’ ‘bucolic tragedy’, inspired by Ovid’s Metamorphoses and Euripides’ The Bacchae, is the story of a free spirit, an elusive stranger and a remarkable and cruel Transformation.

The performances from Justine Viani as Daphne and John Upperton playing Apollo were fantastic. I honestly couldn’t fault them. Their voices were loud and clear and I could listen to them for hours. I did unfortunately struggle to hear some other members of the cast when they had their backs to me, as the volume wasn’t sufficiently loud enough. I wasn’t sure about some of the diction but as I don’t speak German, the language Daphne was performed in, I don’t know if that was more my fault than the performers I struggled with. Maybe the combination of the two were muffled by the walls and layout.

The set was minimalistic with just a sofa and three hanging pieces of cloth. I didn’t think the use of the space particularly great as several times I found I couldn’t see the performances due to the view being blocked by sections of the stage or the cloth. In addition the lighting was a little bit of a let down as frequently the singers’ faces couldn’t be seen as the lights mainly shone directly down leaving shadows, so expressions were lost. From my seat I could also hear, quite loudly considering, the frantic button pressing from the lighting crew when the lights were depicting lightning.

There was a projector that was used during the show, I assume to provide snippets of information to aid understanding what was going on, but as I wasn’t able to actually see the small section of wall receiving the projection that is guess work. I tried to work out how much of the audience could actually see the projection and I would be surprised if it was much more than half, which for me added to the miss-use of the space.

There was one section towards the end with, what appeared to be barbed wire, where it seemed they were trying to intertwine certain members of the cast, however it just got all tangled and became somewhat distracting from what was going on.

Am I glad I saw it, yes but only for the singing performances. The conductor did a great job with the music and singing but he was also the director and I felt disappointed by the actual production, stage use and lighting, which did detract from my overall enjoyment. The pianist was excellent and was flawless throughout the whole performance. If I had sat there with my eyes shut just appreciating the music then it would have been a better experience for me. I would still go back to see further one off performances by Opera at Home as it is an excellent gateway into opera and should be encouraged and supported wholeheartedly.

Daphne:
This imaginative new production of Strauss’ ‘bucolic tragedy’, inspired by Ovid’s Metamorphoses and Euripides’ The Bacchae, sets the classical myth in 1930s Germany. No almighty Gods here, but the powerful commanders of the regime. It is presented by Opera at Home, whose previous productions have included Hansel and Gretel (Grimeborn 2012) and Mozart’s Il Seraglio