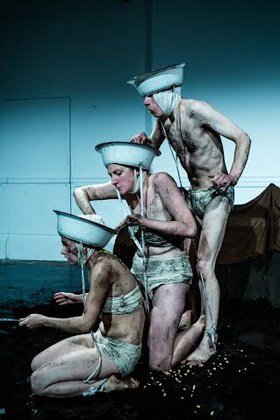 FEAST is an activist’s dream, delving into the evolution of humanity and exposing the excesses and extremes of consumerism. This show takes you to the edge of comfort while exploring the theme of food from primitive struggle to baroque excess and through to present day; the technological age.

The show seemingly starts from the very beginning… of time; wrapped in nothing but rags, covered in soil and grunting their way through the first segue, it proves as a reminder that we eat for survival and the necessity of nourishment. It acts as a stark reminder of what life is like for some, even to this day. Foraging and hoping for the God’s to shine down and proffer some grub – a total juxtaposition to the orderly form of a Waitrose local. Without words, it offers up some powerful imagery and often mixes with the plight of our four legged farm friends.

From fun and games to the more macabre, actor George Ramsay takes one for the team and ends up on an imaginary spit. It is quite a leap as the second segue is very human and yet all of a sudden the tables turn and the audience are taken back to the animal realm. This is very acute imagery as we are reminded that animals have emotions and feelings too.

Without any word spoken the message conveyed in this segment is concrete; you leave with no doubt as to the evils of the modern farming world and the atrocities that are hidden behind clever packaging and closed doors. Explored through the medium of physical theatre and multi media it is a show that packs a punch to the gut. This show will take you to the grotesque physical extreme, it will push boundaries and shock and yet on the other spectrum make you laugh out loud.

Slow at times, the first segment could do with a bit more tempo or at least a few thousand years trimmed off the evolutionary timeline. However, the actors are brilliant in their capacity to keep an audience captive and hats off them for what they endure on stage night after night. If you think ‘I’m A Celebrity’ bush tucker trial was bad, you ain’t seen nothing yet! The actors are bold in their creation and the show is uncomfortable at best and yet for a thinking audience, it is brilliant in its capacity to surmise environmental destruction, farming and human perversion with only sound, movement and props. It is a show full of grit and substance, this isn’t a date night, out with the girls type event, it is a thought provoking piece of theatre best enjoyed with a social conscience.

One thing is for sure, it will leave you with food for thought…

From primitive struggle, through the baroque excess to technological perversion, how has our relationship with nourishment changed throughout history?

This wordless and grotesque show employs physical theatre, clowning and multimedia to delve into the evolution of humanity, exposing consumerism’s excesses and extremes. With cascades of milk, raw steaks, live feed webcams and plenty of soil FEAST is an hour of virtuosic anarchy the like of which you are unlikely to have seen before.

The pairing of work by Bob Dylan and Leonard Cohen in a single recital is a logical move. Though the latter died five years ago, his and his old … END_OF_DOCUMENT_TOKEN_TO_BE_REPLACED

If the dialogue wasn’t quite so eclectic and engaging, I might have decided to attempt to have kept a tally of how many times a trestle table is … END_OF_DOCUMENT_TOKEN_TO_BE_REPLACED

Doctor Who: Time Fracture by Immersive Everywhere has plenty to exhilarate both avid and casual Doctor Who fans, delivering on its promise to let … END_OF_DOCUMENT_TOKEN_TO_BE_REPLACED

A brief review of a brief play. It is, as the Prime Minister (Lisa Day) observes, extremely unlikely that her ‘letter of last resort’ would ever … END_OF_DOCUMENT_TOKEN_TO_BE_REPLACED

It’s a production of Hamlet that starts at 7:30pm and manages to come down on the ‘right’ side of 10:30pm - the hardcore fans and followers of … END_OF_DOCUMENT_TOKEN_TO_BE_REPLACED