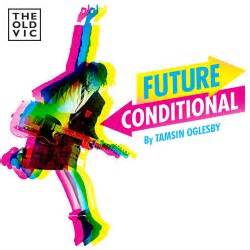 The author Tamsin Oglesby wrote “Future Conditional” because she felt, from her own experience, that the “…hypocrisies, deceptions and compromises [in the British Education system] teach our children a terrible almost anti-education lesson”. So this is a campaigning play which looks at the problem and fairly directly proposes one change which Ms Oglesby thinks could help.

In his speech when receiving the Nobel Prize Harold Pinter said: “Political theatre presents an entirely different set of problems. Sermonising has to be avoided at all cost. Objectivity is essential.”

His own drama was political – sometimes so subtly so that not everyone noticed. You can make a political point, as Pinter did, without laying it on with trowel. In this play, unquestionably well-intentioned, there is perhaps more of the trowel than necessary. That said it is a sincere, well-structured and thought-provoking piece.

“Future Conditional” is a political play about education. It leans towards the wide-ranging rather than the minimalist. Virtually every issue that impacts upon the quality of education in Britain today is touched upon. We start with the recorded voices of successive Prime Ministers telling us about how important education is – culminating, of course, with Blair’s “Education, Education, Education” call to arms. We then explore the complete failure of every administration to move us forward. And we do this by holding a mirror up to where we are today – at the micro level of a school and of parents and at the macro level of a gruesome committee of a fictitious (but only just) body the “Education and Quality Commission”. This Commission is charged with conducting research and making recommendations to improve based on the fact that we “just don’t register on the international stage”.

We see the world in part through the eyes of Alia – a sixteen-year-old pupil at a London Comprehensive which whilst not failing is not actually succeeding either. She came to England as an eleven-year-old refugee from Pakistan. She is the smartest pupil in the School, an Oxbridge entry candidate and has succeeded through natural intelligence, hard work and with the help of a sympathetic and talented teacher, Crane, played by Rob Brydon. We see in harsh contrast Crane delighting in the progress of Alia, whilst struggling to deal with the dysfunctional Jordan (who doesn’t actually appear). The variety of abilities in the classroom is matched by the variety of the parents outside. The better off and the better educated Mums and Dads have far more options than those whose children get free school meals. Not a surprising contention but chillingly portrayed as the parents of children about to move from a State primary school to their secondary school explore their choices. The infamous “Postcode Lottery” is shown in sharp relief with one couple actually faking a separation in order for one of them to establish residence at an address which will help them get their child into a better school! And at the upper end of the wealth scale there is the Private School option “so long as we can afford the school fees”. The dilemma a Guardian-reading but well-heeled liberal parent faces is well summed up when one of them says “You can’t sacrifice your child on the altar of your principles” – shades of Diane Abbot there!

The “Commission” is fictional but it rings some uncomfortable bells. There is no possibility of bridging the gap between one Eton College educated member who defends both his school and the independent sector and a working-class colleague for whom the Public Schools are the enemy. One of the strongest moments in the play is when Alia, slightly improbably but a good dramatic twist, is co-opted onto the Committee as a pupil member. She listens to an increasingly bitter exchange between the warring parties and when asked for her view sums it all up neatly. She spots that the school choice it is all about class: “Parents do not choose by logic they choose by tribe. And the tribe on top, of course, wants to stay on top. You say you want to be fair but what is fair for one tribe is not fair for every tribe”. She also lists the mind-blowing variety of types of School in the English system – a variety that is not just about quality but about design, selection and structure. A child in Kent or Lincolnshire (for example) can still sit the Eleven Plus and if he or she passes go to a Grammar School. A Child in (say) Sussex does not have that option. Add in, as Alia does, Free Schools, Academies, Faith Schools and the Independent sector to this and you see how shambolic and random it all is. And why the pushier parents find ways to beat the system if they can or pay, if they can’t.

The teacher Crane is in the long tradition of inspirational teachers in drama with shades of Alan Bennet’s Hector (The History Boys) and John Keating played by Robin Williams in The Dead Poets Society. He fights against the system – one that requires him to apologise when he correctly tells the misbehaving Jordan some home truths! At the end of the play you see why he stays doing it – the effort is worthwhile if one child succeeds and overcomes the obstacles that the system puts in its path. Rob Brydon plays this engaging character with an air of resigned despair, at times, but also with optimism that good teaching will sometimes succeed.

“Future Conditional” is about education – but it is also about our Society more generally. One in which the “haves” (or some of them) will shrug and say “The poor are always with us” and in which the gaps between the tribes are so wide as not to be just unbridgeable but incomprehensible. The language of the College committee considering Alia for Oxford entrance bears no resemblance to the language of some of the Mums in the school playground. And this difference is about much more than words and grammar! At another point Alia says when the Public school system is explained to her “So “Public” means “Private” then? That’s what I love about your language!” At the end Alia is asked for a solution to the problems and suggests that Oxbridge and the other top Universities should offer “… two or maybe three places to the top students of every school”. The socially engineered result of this would, she says, dramatically improve overall standards. It is an idea proposed by the education writer Peter Wilby and he has no doubt heard the response that Alia gets that such a thing would “Damage Oxbridge’s reputation and reduce standards.” Those in power and with access to privilege jealously guard it!

There are more plot lines in the play than I have space to describe here. As I say not much on the subject is missed in this sincere, original and well-performed work. Back in 1969 Alan Bennet in “Forty Years On” (overdue a revival by the way!) used a school as a metaphor for society as a whole.

More than forty years on from its production much has changed, but in education there is a case to be made that by comparison with other nations Britain has gone backwards, despite successive Prime Minister’s rhetoric. This play helps address why that is.

Future Conditional tackles the conundrum of British schooling through a myriad of characters including parents, teachers, and Alia, a prodigiously clever young Afghan refugee and the newest member of Britain’s Education Research Board. Alia has a radical solution for Britain’s schools that could restore our place in the world education league. But is the system ready to take lessons from a schoolgirl..?

This entertaining new musical is very fortunate in having as its leading lady the terrific Katie Elin-Salt: she is onstage almost throughout, singing … END_OF_DOCUMENT_TOKEN_TO_BE_REPLACED

“Keep it shallow, keep it pretty, keep it moving,” declares Justin Vivian Bond, letting the audience determine for themselves what precisely is really … END_OF_DOCUMENT_TOKEN_TO_BE_REPLACED

This play didn’t do that well on Broadway the first time around in 1963, and did worse the second time around, even with a revised script, running in … END_OF_DOCUMENT_TOKEN_TO_BE_REPLACED

One of the very few good things about the COVID pandemic is that the opportunities to live stream theatre performances have increased exponentially, … END_OF_DOCUMENT_TOKEN_TO_BE_REPLACED