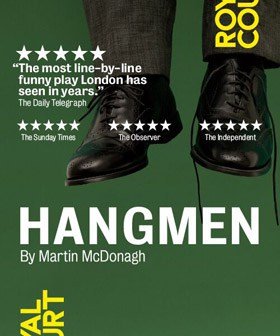 1963 was an auspicious year for some people. Aside from being the year I was born, it was also, according to Martin McDonagh’s gripping play Hangmen at Wyndham’s Theatre, the year when Britain’s No 2 hangman may have carried out a grave miscarriage of justice just by carrying out his job.

In a bleak cell a young convict by the name of James Hennessy (Josef Davies) is sitting between two wardens waiting for the door to open. When it does, the room is suddenly full of people as hangman Harry Wade (David Morrissey) and his assistant Syd Dernley (Andy Nyman) enter to carry out the state ordered execution of the prisoner for the murder of a young girl in Lowestoft. Hennessy is a little peeved at this, firstly because he keeps trying to convince everyone he is innocent and secondly because if he is going to be hanged, he wants it to be done at the hands of Britain’s No 1 hangman Albert Pierrepoint (John Hodgkinson) rather than Harry. Eventually the execution is carried out in the prescribed manner – well sort of – and the play moves forward two years to 1965 and the death penalty has just been abolished.

A straight-backed, bow tie wearing Harry – along with his wife Alice (Sally Rogers) and 15 year old daughter Shirley (Bronwyn James) – is now running a pub in Oldham. In addition to his usual bunch of cronies, the pub today has Clegg (James Dryden), a young cub reporter from the ‘Oldham Gazette’ trying to get a quote from Harry on the abolition of the death penalty. Sensing Harry’s reluctance as a ‘servant of the crown’, Clegg tells him not to worry as he will get an interview with Pierrepoint instead. Despite the advice of Harry’s ‘friend’ Inspector Fry (Craig Parkinson), Harry decides to give a full blown interview to the reporter and takes him to the flat upstairs for their chat. Whilst they are gone, an exotic – but not Babycham drinking – young man from down south arrives in the pub. His name is Peter Mooney (Johnny Flynn) and although they don’t realise this yet, this ‘vaguely menacing’ man, has some major secrets in his life and will turn Harry, Alice and especially Shirley’s lives upside down during his short visit to Oldham.

I wasn’t sure what to expect when I arrived to see Hangmen. I knew it had been a sell-out hit at the Royal Court before transferring into the West End. Most of the notices outside of the theatre mentioned it being a rip-roaring comedy but I was very dubious as to whether a subject like the death penalty could be made into a laughing matter. It turned out, that it could. Even the opening hanging scene was laugh-out-loud funny in places, with the script providing some truly wonderful moments of light relief in what could be a very harrowing scene. It would also be very easy for Hangmen to shoot off into the world of farce – Harry is a sort of Basil Fawlty without the charm or dedication to customer service – but again this is avoided beautifully. The writing is definitely not PC, and there is a strong element of misogyny in the relationships between Harry, his wife and daughter, not to mention some pretty heavy handed racist and homophobic elements. But they do not seem out of place for a Northern town in 1965 when the initials PC were short for Police Constable and nothing else.

Anna Fleischle’s set is nothing short of amazing. From the perfectly formed prison cell, we have a wonderful and instantly recognisable 1960s back street pub and then a mouldy old greasy spoon of a style that has never really gone away – full fry up for a shilling, tastes great but takes five years off your life with all the lard it’s cooked in. Director Matthew Dunster keeps the action moving at a lively pace and builds the tension in the second act very nicely.

However, this is a real actor’s play and both David Morrissey and Johnny Flynn really make the most of their quite complicated roles. By the end, I still wasn’t sure who or what Peter Mooney actually was, nor could I work out how Harry was going to cope with a life without hanging – especially as he had now started to have doubts about his previous profession. The two actors gave really fantastic performances bringing their respective characters to life beautifully. This is true of pretty much all of the cast though I did have a bit of an issue with Bronwyn James, Shirley who both in looks and the way the character was written struck me as being older than 15 and if I’m frank, I did wonder if the Oldham Police in the person of Craig Parkinson’s Inspector Fry would really have reacted the way he did to what occurred in Act II. But these are minor quibbles about a really thought-provoking and gripping play.

There were many twists and turns that took my companion and I by surprise. A dazzling transfer from the Royal Court that really got me to care about the characters and had my companion and myself in a very deep and meaningful conversation in the pub afterwards.

Following a sell out run at The Royal Court Theatre, Olivier and Academy Award® winner Martin McDonagh (The Pillowman, The Cripple of Inishmaan, In Bruges) returns to the West End with Matthew Dunster’s award-winning production of Hangmen.

In his small pub in Oldham, Harry is something of a local celebrity. But what’s the second-best hangman in England to do on the day they’ve abolished hanging? Amongst the cub reporters and sycophantic pub regulars, dying to hear Harry’s reaction to the news, a peculiar stranger lurks, with a very different motive for his visit.

Martin’s McDonagh’s theatre credits include The Beauty Queen of Leenane (the Royal Court), The Cripple of Inishmaan (National/West End/Broadway), The Pillowman (National/ Broadway), The Lieutenant of Inishmore (RSC/Garrick/Broadway) and A Behanding in Spokane (Broadway). For film (as Writer/Director) credits include Six Shooter (Short), In Bruges and Seven Psychopaths. Martin has been awarded the Olivier Award for Best New Comedy (The Lieutenant of Inishmore), an Olivier Award for Best New Play (The Pillowman), an Academy Award for Best Live Action Short Film (Six Shooter) and a BAFTA for Best Original Screenplay (In Bruges).

It wasn’t that long ago when anyone who gave warnings about Sleeping Beauty would be dismissed as more than a little ridiculous. The concern is that … END_OF_DOCUMENT_TOKEN_TO_BE_REPLACED

Alby hates themself, but can't work out why, and that irks them, even if they don't quite realise it. In this witty, occasionally unsubtle, but … END_OF_DOCUMENT_TOKEN_TO_BE_REPLACED

I have seen some outstanding acting recently at the intimate Finborough Theatre, and this new play is no exception. The highly talented cast quickly … END_OF_DOCUMENT_TOKEN_TO_BE_REPLACED

In the pandemic (remember that?) I worked in adult social care. My role was to help older people in their own homes with daily tasks - I’d cook meals, … END_OF_DOCUMENT_TOKEN_TO_BE_REPLACED