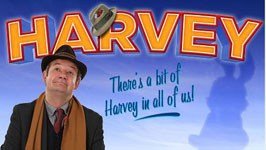 This was my first visit to the pretty Richmond Theatre in its idyllic picture postcard setting for a show I’d been looking forward to seeing. Written by Pulitzer Prize winner Mary Coyle Chase this comedy set in America has a huge heart.

On arrival one can see the stage is beautifully dressed. The set is also very effective and clever with its rotational mechanism to change the scenes between drawing room, psychiatrist’s reception and bar.

Maureen Lipman as Veta Louise Simmons shows her comic timing is plentiful and her telephone monologues were very amusing. James Dreyfus plays Elwood P Dowd the kind hearted, generous and affable brother whose friendship with his ever present companion Harvey had a warm and lovable feel. Harvey the 6ft plus imaginary white rabbit is visible from the moment that he is introduced through Elwood’s interaction with his friend.

Ingrid Oliver as the repressed frustrated daughter (Myrtle Mae Simmons) was both witty and endearing. Sally Scott (Nurse Ruth Kelly RN) and Jack Hawkins (Lyman Sanderson) complemented each other well. David Bamber (William R Chumley) whose portrayal of the esteemed psychiatrist demonstrated the farcical element of the comedy whilst being fun to watch.

This play started its performing life on the stage but it was made famous by the motion picture of 1950 in which James Stewart took the lead. I feel that James Dreyfus not only shares his first name but also much of the charisma and acting strength too, his facial expressions did make me laugh especially in the psychiatrist’s reception scene. However all the cast really did work as a team in this play and everyone had their moment, even Harvey was invited to take a bow!

My view on this show is it’s simply charming! It put a smile on my face and a glow in my heart as I left the theatre, because as the programme says there’s a little bit of Harvey in all of us isn’t there? As I said at the start of this review, I’d been looking forward to this show ever since it was announced and I was proven right. It’s soon to be heading into the Theatre Royal Haymarket so if you don’t catch it in Richmond this week I’d certainly encourage you to see it at its new home for its limited run.

There’s a bit of Harvey in all of us!

Lindsay Posner’s new production of Mary Chase’s Pulitzer prize-winning comedy, Harvey will embark on a UK tour for 2015 stopping off at Richmond Theatre this March. This magical production stars James Dreyfus (Notting Hill, Cabaret) as the eccentric Elwood P.Dowd who has an unwavering friendship with a six foot tall, invisible rabbit, named Harvey. Joining James is none other than renowned theatre, TV and film actress Maureen Lipman.

Like most people, I think, I often have mixed feelings about a show I see. Occasionally, though it is rare, there will be a production where … END_OF_DOCUMENT_TOKEN_TO_BE_REPLACED

“The times they are a-changin'”, as Bob Dylan put it - and as a deceased woman’s grandson (Phillip Jones) returns home to attend the funeral, the … END_OF_DOCUMENT_TOKEN_TO_BE_REPLACED

It’s not often that the entertainment tastes of an intellectually snobby middle-aged woman and an action-mad 10-year-old boy align perfectly, but … END_OF_DOCUMENT_TOKEN_TO_BE_REPLACED

Notre Dame is the latest digital production by Threedumb Theatre, live-streamed from The Space in Canary Wharf, London and directed by Stephen Smith, … END_OF_DOCUMENT_TOKEN_TO_BE_REPLACED