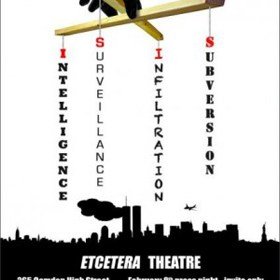 In less than two years, the terror group ISIS has become notorious for its execution videos of beheadings and mass killings. It is an acronym that throws up images of hooded, sword­wielding poster boys who signal the coming of the apocalypse to a city near you.

In Retep Yehtaen’s new political drama, I.S.I.S., the acronym stands for Intelligence, Surveillance, Infiltration, Subversion. It also wields a mighty sword, one which asks us to defeat any form of political oppression that seeks to conceal the truth, whether it be dictatorship or democracy. Its message concerns itself with the need for a re­investigation of the events of 9/11 and the collapse of the third tower, World Trade Center (WTC) Building 7 that imploded in only ‛seven seconds’ – several hours after the WTC North and South Towers fell on that apocalyptic day.

Whether you subscribe to the official government report of the events of 9/11, or whether you believe that the collapse of the three towers is just too bizarre to be true, Yehtaen’s play will have you rethinking your position.

The play begins with an ominous feel. Group Captain Beresford, a government agent (Michael Culver) sits at his desk, his expression passive – reminiscent of the character in Beckett’s Krapp’s Last Tape. He concerns himself with objects of transmission, headphones cover his ears, a computer screen glares back at him.

He occupies a space separate from a meeting that is about to take place among a group of people organised around a common goal: to gather support for an independent investigation into the destruction of the Twin Towers and Building 7. The group’s members wear ‛Seven Seconds’ tee­shirts, a reference to the seven seconds it took to bring down Building 7. But immediately we are confronted with an uneasy camaraderie of enthusiastic back slaps and rigid smiles that belie a tension just below the surface of each character’s intention. And it is within this context that Peter Neathey, I.S.I.S. director and actor, uses a deft hand, and the talents of his cast, to ensure the play’s politics work in a dramatic context. For it is the parallel story of betrayal, folly, hubris and deceit – inherent in all human relations – that mirrors the elements of corruption in government and unwittingly points to why we get the governments we deserve.

Early in the play, we are introduced to a power struggle between two members of the supposedly homogeneous Seven Seconds group. Horns lock between group leader Bob Bernstein (Peter Neathey) and Brad Schimmer (Michael McClare) who refers to himself as Gay Jew Brad. The men are of opposing points of view.

Bob, a character of reason, believes that scientific theory is the way forward in garnering support for a fresh investigation of 9/11, while Brad, brash and reactionary, believes that finding out ‛Who Done It’ is the method that will bring the culprits to book. And he has very specific ideas about who the culprits might be.

Each character supports his political stance through rigorous use of a dongle stick and archival video evidence that suggests systematic, covert and subversive acts at the highest levels of government, not only in relation to 9/11 but to military campaigns throughout the 20th century. Group Captain Beresford through covert, but incredibly banal, means is able to destabilise the group, and it is worth a visit to the Etcetera Theatre to discover how he does it.

Without revealing any more of the plot, it suffices to say that the concerns of the play I.S.I.S. transcend the events of 9/11 and are more urgent now than on 11th September 2001: challenges to official narrative, participation in unjust conflicts, limited access to information and the labeling of citizens with opposing points of view as ‛non-­violent extremists’ (see Peter Neathey’s quote below).

A London based group, which is becoming too successful in questioning 9/11, is infiltrated by the security services. Director Peter Neathey writes: Last year David Cameron made it clear that he felt that anyone who questioned the veracity of the official 9/11 narrative was a “Non Violent Extremist”.

I.S.I.S has a strong cast led by Hampstead born actor Michael Culver. Michael played Captain Needa in “The Empire Strikes Back” Now he plays Group Captain Beresford at the “Etcetera”.

Britain, so a London cab driver once told me, is obsessed with the Second World War, as though it happened just recently. Power Luncheon would seem, … END_OF_DOCUMENT_TOKEN_TO_BE_REPLACED

William J Dunleavy, author and star of this monologue play, is a writer and face to watch. He enters the room (as the staging is more geared towards … END_OF_DOCUMENT_TOKEN_TO_BE_REPLACED

Cirque du Soleil’s Luzia is a joyful whirl through a psychedelic Mexico, which reminds us why live theatre is so special. Anyone who goes to … END_OF_DOCUMENT_TOKEN_TO_BE_REPLACED

I am always very excited to come across a new theatre, and Esher Theatre is a real ‘find’, conveniently situated near to Esher High Street and right … END_OF_DOCUMENT_TOKEN_TO_BE_REPLACED

Cecil Sharp is no unsung hero. Without the energy of this driven and at times prickly musician, the traditional folksong of rural England would very … END_OF_DOCUMENT_TOKEN_TO_BE_REPLACED