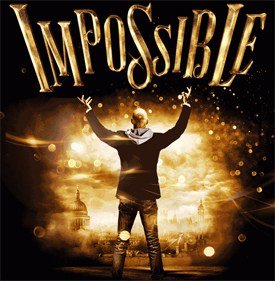 It’s now been a few days since I saw Impossible at the Noel Coward Theatre, and I think I’ve just about picked my jaw up off the floor. If you, like me, are one of those people who always think they’ll be able to tell how magic tricks are done, I challenge you to watch this show and come out with any answers.

The show’s aptly named; some of the tricks performed on that stage simply should not be physically possible. A star-studded cast of some of the world’s greatest illusionists made us laugh, applaud and occasionally whimper in terror… all completely live, and without appearing even to break a sweat. With the help of some glamorous assistants and a few volunteers (beware if you’re in the stalls; you’re in the danger zone), they present a seamless showcase of everything from escapology to sleight of hand, mind-reading to levitation.

Directed by three-time BAFTA winner Anthony Owen, the show is incredibly fast-paced (never have the words ‘blink and you’ll miss it’ seemed more appropriate), and accompanied by booming music and a lot of flashing lights. There are some moments of high drama: Jonathan Goodwin lies on a bed of nail – no, that’s not a typo – while Ali Cook must escape from a locked tank full of water, and Jamie Allan cuts a woman in half with a laser. Because this is the 21st century, after all; who needs a saw?

In between these death-defying stunts, we get to relax and enjoy Katherine Mills’ card tricks and Ben Hart’s sleight of hand, not only because they’re amazing, but because we know nobody’s going to die. I wish we could have seen more from Damien O’Brien, who appeared as part of the group acts, and entertained the audience during the interval; it wasn’t clear why he didn’t have a solo spot.

My personal favourites, though, were the irresistible and very funny Chris Cox, who openly admits he can’t really read minds, but then proceeds to apparently do just that, and smooth-talking illusionist Luis de Matos, who leads the entire audience in a trick, so that we can see the magic happening in our own hands. I still have no idea how that worked.

But it’s not only about the stars of the show. Credit of course must also go to the illusionists’ assistants, who literally put their lives in their colleagues’ hands over and over again (although it might have been refreshing to see a male assistant put in the firing line once or twice, in the name of equality), and the stage crew, without whom it could all have gone horribly, horribly wrong.

Impossible is a truly incredible show – in every sense of the word – and must be seen to be (dis)believed. Although the tricks themselves may be hundreds of years old, the cast bring a modern twist that keeps them fresh, and just as astonishing as they would have been the first time they were performed. As with all magic shows, we know what’s coming – but that doesn’t make it any less amazing when it does. So even if you’re not usually a fan of magic, this may just be the show that makes you believe in the impossible.

IMPOSSIBLE, the biggest magic show in decades is set to thrill audiences in London’s West End this summer at the Noël Coward Theatre. The show will feature the very best magicians and tricksters from around the world, fusing dazzling grand stage illusions, up-close-and-personal magic, cutting-edge technological tricks and death-defying escapology in a fast-paced, breath-taking spectacular for every generation.

Celebrating its global premiere this July in London, where Harry Houdini and the superstars of illusion stunned Victorian audiences on stage, IMPOSSIBLE will re-establish the UK capital as the epicentre of innovation and spectacle, hosting the greatest magic show on Earth. Directed by Anthony Owen, the multi-award winning producer and magic consultant behind Channel 4’s Derren Brown, IMPOSSIBLE brings eight world-leading performers together live on-stage for the very first time. Featuring a stunning range of magical artistry, from astonishing acts of epic proportions to dumbfounding up-close sleight of hand, be ready to be mesmerized and baffled by these incredible illusionists.
Nothing is quite as it seems…

The background stays largely the same throughout the performance, and appears to resemble the hairstyle of Elle Woods (Courtney Bowman). Regardless, … END_OF_DOCUMENT_TOKEN_TO_BE_REPLACED

Everyman is one of the earliest printed plays, originally written in Middle English and first performed around 1510. It is a morality play, popular … END_OF_DOCUMENT_TOKEN_TO_BE_REPLACED

After being closed for over two years due to covid, the Arcola Theatre has re-opened with Barney Norris’s love song to the people who raised him, We … END_OF_DOCUMENT_TOKEN_TO_BE_REPLACED

Now in its 15th year, La Clique have firmly established their place on the world burlesque circuit and this year’s London cast bring their infamous … END_OF_DOCUMENT_TOKEN_TO_BE_REPLACED