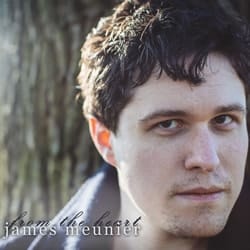 James Meunier is currently in the UK Tour of Sunset Boulevard understudying the role of Joe Gillis. The EP is produced by Auburn Jam (Nikki and Joe Davison), including original arrangements by Joe Davison, and featuring live musicians – including Richard Meunier on guitar and string players.

It has been a very pleasurable voyage of discovery listening to James Meunier’s EP. He has an attractive light high baritone with a slight vibrato, which he uses to great effect.

‘Bring Him Home’ is so well known that it is easy to compare this version with those of other much better-known artistes, but James’ interpretation is as valid as the very best, especially in the climax, which is effortless.
‘Take a Chance on Me’ is a total contrast in a well-planned programme. James is able to sing off the words with creativity and make something individual of this song.

‘Maria’ again has been recorded many times, but the singer uses his imagination, especially on the repeats of Maria where it leads into the song itself. One really feels that he means what he is singing, and that the song has been specially composed for him to sing. His upper register is used to great effect in this number.

‘Till you Sing Once More’ is a very dramatic ballad which James puts over with style and panache.
‘Burn For You’ demonstrates very successfully the performer’s use of different timbres in his voice: again, he doesn’t just sing the music, he uses the words with ingenuity and colour so that the listener immediately becomes involved in the story he is telling.

At present, James is touring in Sunset Boulevard, so the title song from this show is a great conclusion to this programme, demonstrating again, his versatility and his intelligent way with words.

The engineering on this EP is by Nikki and Joe Davison(Auburn Jam) and the highly successful arrangements featuring live(!) musicians, including the artiste’s brother Richard Meunier on guitar plus strings by Joe Davison (played by a live string section) – like James, someone who clearly knows what he is doing and has the necessary technical ability and inventiveness.

A highly successful programme of songs chosen to showcase James Meunier, of whom I hope we shall see and hear a lot more! I will certainly try to see Sunset Boulevard on tour in the next few weeks!

Everyman is one of the earliest printed plays, originally written in Middle English and first performed around 1510. It is a morality play, popular … END_OF_DOCUMENT_TOKEN_TO_BE_REPLACED

After being closed for over two years due to covid, the Arcola Theatre has re-opened with Barney Norris’s love song to the people who raised him, We … END_OF_DOCUMENT_TOKEN_TO_BE_REPLACED

Now in its 15th year, La Clique have firmly established their place on the world burlesque circuit and this year’s London cast bring their infamous … END_OF_DOCUMENT_TOKEN_TO_BE_REPLACED

Warm, funny and lacerating, Satinder Kaur Chohan’s new play opens with a fly-on-the-wall look at the daily attempts women make to be accepted and … END_OF_DOCUMENT_TOKEN_TO_BE_REPLACED