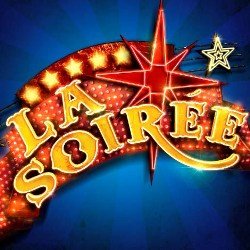 Wow! Just wow! If you don’t want to read the whole review I will cut to the chase and say go and see La Soirée if you can.

La Soirée has returned to Leicester Square, its original home in London, from a 3-year spell at The Southbank, bringing its mix of cabaret, acrobatics, and burlesque to the stage in a visual and auditory feast. Fair warning, this show is rated 18 and for good reason. You’ll get partial nudity, full-nudity, and swearing but it is all done in such a way as it just complements the entire experience.

Ursula Martinez brings us a taste of Spain, via Croydon, performing the disappearing hankie striptease that has been witnessed around the world and still entertains. Although having turned 50 the hankie will soon disappear for good.

Captain Frodo does things with tennis rackets someone just shouldn’t be able to do! His contortion and manipulation skills are astounding and a little bit worrying at times but that’s all part of the act.

Acantha Lang is from the USA and delights the audience with her vocal talents. Her voice has a power that would impress on any stage and you can’t help but be wowed with her renditions.

Daredevil Chicken, Marc and Svetlana, are from Vegas and do things with a banana you just don’t expect to see. I guess one could call it banana tennis with their mouths being the rackets. It is as gross as it sounds but so funny you can’t help but watch.

Olivia Porter brings a twist to juggling. It is a haki sack/juggling fusion that adds a style that is unique to her and as visually compelling as it is entertaining.

Jarred Dewey turns up in what appears to be patent leather 6-inch heels and then proceeds to fling himself around the suspended swing with abandon, control and an ease that hides how hard it must be.

The English Gentlemen (my personal favourite) are Denis Lock (ladies you’re in for a treat here) and Hamish McCann. Their acrobatic skill, core strength, and balance leave you with your mouth wide open and applauding for more. Dennis also goes from the strength of the double act to a gentleness involving bubbles and smoke that shows there is much more to bubble blowing than you might have thought possible.

Satya Bella (gentlemen this one is for you) demonstrates a skill with hula hoops that amazes. The balance and agility whilst multi-hooping makes it beautiful to watch.

David Girard performs on a rotating and revolving “hamster wheel”. The control and strength from another performer impress leaving most men feeling a little inadequate I’m sure. If you’ve never been to see La Soirée now is your chance and it is well worth it.

The hit cabaret show is back for another awe-inspiring, jaw-dropping and downright unmissable Christmas run in Leicester Square.

Returning to London with yet another sensational line-up, La Soirée showcases the crème of the cabaret world as it introduces the newest members of its dysfunctional family alongside very dear old friends.

So step in from the cold, leave your troubles at the door and prepare for a night of thrills, shocks, laughter and disbelief as La Soirée banishes to the winter blues and leaves you wanting to see it all over again.

CAPTAIN FRODO
The son of a famous Norse magician, this wunderkind has graced the stage since he was four. Possessed of an utterly beguiling charm, and famed the world over for bending, contorting and manipulating his body into shapes that are as astonishing as they are unnatural, Frodo is one of a kind. You will never look at a tennis racquet, much less a baked-bean tin, the same way again.

ACANTHA LANG
This sensational songstress hails from hot and steamy New Orleans, home of the Blues. Fresh from the hippest of haunts in New York City with abundant acclaim, this divine Diva will put a spell on you as she wows the crowd with her powerhouse vocals and high octane performance!

OLIVIA PORTER
Not just your normal everyday juggler, in a very short time, Olivia Porter has already taken the circus and physical theatre world by storm with her innovative and renowned juggling style. Incorporating an offbeat storytelling aspect to her performance, along with a deadpan comedic persona, unique manipulation skills and captivating movement, this quirky trickster is sure to have you shaking your head in wonder at this left-of-centre sensation.

SATYA BELLA
The enigmatic Satya has spent the last ten years spinning in circles and taking the hula hoop to the next level. Having undergone elite training with the Beijing Acrobatic School, Satya combines a unique display of beguiling grace, extreme flexibility and high-skilled multi-hooping to gather more than a few captivating tricks under her belt. She’s virtually circled her way around the globe, performing in over 42 countries in exotic locales from Lake Tahoe to Beirut to Goa. Stand back and let Satya show you a thing or two.

DAVID GIRARD
Seizing the stage, is the explosive and exclusive cirQle – an electrifying apparatus of sheer innovation. Experience the extreme as David Girard flirts with danger, pushing the boundaries of the physical body. Our herculean acrobat has pioneered the creation of the colossal, circular contraption, which revolves and rotates whilst he showcases exceptional balance and momentous moves which are sure to leave you in awe.

JARRED DEWEY
Lithe, limber yet exquisitely enthralling, this awesome aerialist has been swinging between both hemispheres since he burst onto the scene. Gaze up in amazement and prepare for a provocative display of physical prowess.

DAREDEVIL CHICKEN
This Vegas couple has charmed crowds in over 36 countries, performing in a legion of languages, sharing love and laughter across the lands with their raucous comedy. Fusing raunch slapstick and 80’s pop melodrama, this hilariously unforgettable duo will have your sides splitting with their vaudevillian verve, and matrimonial mischief. Marc and Svetlana (AKA Daredevil Chicken) are proof that what happens in Vegas does not stay in Vegas.

URSULA MARTINEZ
Hailing from Spain via Croydon, Ursula Martinez is a renowned writer, performer and pioneer of the London cabaret scene. Her cult striptease act, with its mischievous disappearing hanky, is a jaw-dropping sensation and has seen her in global demand for over 20 years, performing for A-listers and royalty from Hobart to Helsinki! A founding member of the La Soirée family, she continues be the talk of dinner parties the world over. Returning to Leicester Square, we raise a glass to Martinez (who recently turned 50) as she waves her hanky for us for the very last time.

HAMISH MCCANN’S POLE ACT
This English Gent has been seducing audiences across the globe with his jaw-dropping pole act since 2009. His late night cabaret version of Singing in the Rain has acquired a worldwide cult reputation with this extremely skilled, stylish and oh so sexy routine, which is sure to leave you ‘feeling good’…

THE ENGLISH GENTS
Denis Lock and Hamish McCann are two delightfully devilish and cordial “English” gentlemen who perform inconceivable feats of acrobatic skill, strength and balance, whilst casually puffing a pipe, reading the newspaper and sporting the stiffest of British upper lips. The act mixes their highly skilled feats with a dry English wit, unexpectedly climaxing with the two hilariously baring near-all for Queen and country and in the process displaying more pure sex appeal than ever before seen under a bowler hat.

DENIS LOCK’S BUBBLE ACT
From sheer strength to daring delicacy, what this English Gent puffs out of his pipe defies belief. An act where science steps away from the chalkboard and reveals its beauty and mystique through a bubble. Think you’ve seen it all with bubble-blowing? Prepare to hold your breath and gaze on in wonder.

“The times they are a-changin'”, as Bob Dylan put it - and as a deceased woman’s grandson (Phillip Jones) returns home to attend the funeral, the … END_OF_DOCUMENT_TOKEN_TO_BE_REPLACED

It’s not often that the entertainment tastes of an intellectually snobby middle-aged woman and an action-mad 10-year-old boy align perfectly, but … END_OF_DOCUMENT_TOKEN_TO_BE_REPLACED

Notre Dame is the latest digital production by Threedumb Theatre, live-streamed from The Space in Canary Wharf, London and directed by Stephen Smith, … END_OF_DOCUMENT_TOKEN_TO_BE_REPLACED

Icarus has fallen, and Minos has her dead to rights in an open-shut court case, but perhaps another story might be found. An interesting premise, an … END_OF_DOCUMENT_TOKEN_TO_BE_REPLACED

The latest production at the intimate Finborough Theatre boasts a visually striking set designed by Sarah Beaton on a traverse stage, with the … END_OF_DOCUMENT_TOKEN_TO_BE_REPLACED