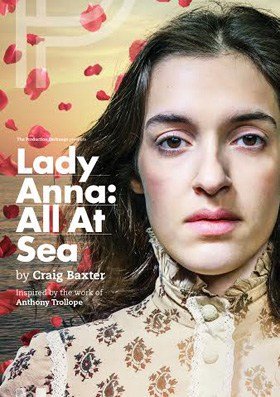 In some respects Anthony Trollope remains something of a hard-sell to modern audiences: his popularity diminished greatly during his own lifetime, and neither is his legacy as distinguished nor his work as avant-garde as that of many of his contemporaries (Dickens, Eliot, or James). Indeed, while his novels remain a staple of genteel TV costume-drama adaptations, his writing often struggles to transcend the particular context and time in which he was writing. The Trollope Society, however – in his bicentenary year – have sought to build on his modest surge in popularity in this commission written by Craig Baxter.

Following the aristocratic machinations and elegant intrigues that so seemed to capture the Victorian zeitgeist, the conceit of the play is to simultaneously weave together the story of the composition and plot of Trollope’s 1871 novel Lady Anna. Anna, the illegitimate daughter of an Earl, is thrust into lengthy court proceedings to have herself rightfully declared as ‘Lady Anna’ by her ambitious mother Mrs Lovel (delightfully played with frightening eye-rolling insanity by Caroline Langrishe). Meanwhile, Lord Lovel, the heir to the title and her cousin (a naïvely insouciant and boyishly rosy-cheeked Adam Scott-Rowley), must convince Anna to marry him in order to secure himself the hefty estate which she will receive if her claim is validated. The fly in the ointment? She and her childhood sweetheart, Daniel Thwaite – an impoverished tailor’s son – are desperately in love and already clandestinely engaged. But, as Mrs Lovel reminds us, “a girl who is a lady should never marry a man who is not a gentleman.” Victorian melodrama at its best.

The backdrop to this sensational family affair is the drafting of the novel itself, as Trollope and his wife-come-editor sail from Liverpool to Australia aboard the Great Britain. To this end, all the actors slip between characters and plots, between the fictional and the non-fictional, donning coats and shawls as they dive in and out of the converging storylines. In this, the cast is helped by Libby Watson’s beautifully crafted set, a playground of over-sized books in delicate pastels, tactfully modified as chairs, tables, and even the precarious steppingstones of Bolton Abbey. Tim Frances, who jumps between Trollope himself and the Lovel family lawyer, captures the infectiously playful author with an authoritative and commendable naturalism.

Indeed, it is Baxter’s knitting of the real with the imaginary that lifts this play beyond Trollope’s original. With a knowing wink he invites the audience in to watch how gleefully the author seeks to shock and baffle his po-faced shipmates. In this, Julie Teal delivers a wonderfully mischievous American tourist also travelling to the Antipodes, a languorous and dry foil to Frances’ boundless friskiness. The play itself becomes a study not just of the man, but of writing itself -both novels and plays, both fiction and non-fiction – s the cast bounce from action to direct-address, from characters in a book to actors on a stage. In Baxter’s hands, and under Colin Blumenau’s astute direction, Lady Anna is able to surpass the particularities of the novel’s Victorian mores and attitudes, to become an effervescent and affectionate portrait of a man the Trollope Society quite rightly holds dear to their hearts.

Review by Ziad Samaha
The Production Exchange presents
Lady Anna: All At Sea
by Craig Baxter
A girl who is a lady should never marry a man who is not a Gentleman. Anthony Trollope finds himself in uncharted waters as he pens the very Victorian scandal Lady Anna.
It’s 1871, and celebrated novelist Anthony Trollope is Australia-bound aboard the steamship Great Britain. Accompanied by his wife Rose and her maid Isabella, Trollope passes the time by writing his latest tale, Lady Anna. The story, full of intrigue, rebellion and social politics, proves divisive among his fellow passengers – and it’s not long before fact and fiction overlap in a dramatic and witty fashion.  Is Trollope himself a surprising radical pitted against the status quo – or are his characters to blame for the controversy?

This abundantly British business involves a disputed title, fraud, bigamy, a legal case, madness and even attempted murder. An extraordinary set of circumstances finds both Lady Anna and Trollope facing some very difficult questions indeed – but will they follow their hearts and risk being disgraced?

Lady Anna: All at Sea was commissioned by the Trollope Society as part of the Trollope Bicentennial Celebrations.

Celebrated novelist and family member Joanna Trollope said, “This year is the bi-centenary of Anthony Trollope’s birth, so what could celebrate it better than a play inspired by his novel about one of the great themes of our own times – that of defying convention and convenience to follow one’s heart. Even the title of this play – “Lady Anna at Sea” – is apt, since Trollope WAS at sea when he wrote it, on his way to Australia. If he were still alive, he’d be thrilled, and as eager to see the play as I am….”

This happens to be a timely production: employment has hit the headlines again at the time of writing, this time because of the concept of ‘quiet … END_OF_DOCUMENT_TOKEN_TO_BE_REPLACED

An opera (well, technically, an ‘opéra comique’, as there is spoken dialogue) in a relatively small space like the Charing Cross Theatre calls for … END_OF_DOCUMENT_TOKEN_TO_BE_REPLACED

Shoes, one would have thought, are fairly recession-proof. The problem for Charlie Price (Joel Harper-Jackson, reprising the role he previously played … END_OF_DOCUMENT_TOKEN_TO_BE_REPLACED

The descriptions of what happens in this show are so vivid that paradoxically they leave nothing to the imagination – and, at least at the performance … END_OF_DOCUMENT_TOKEN_TO_BE_REPLACED