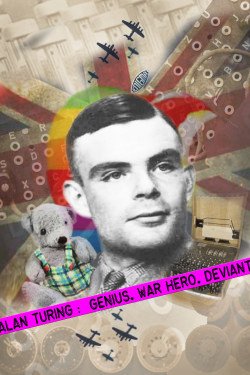 Ian Hallard takes on the role of Alan Turing in this surreal and highly emotional play, directed by Matthew Parker, Artistic Director at the Hope Theatre, in this production of Snoo Wilson’s text. The play is an eye-opening original look at the life of Alan Turing. Beginning with the news of his death, a quiet and serene Turing is revealed from behind a sheet onstage: holding a bright red apple with a bite missing. The calm atmosphere is soon interrupted by the arrival of his beloved childhood teddy bear Porgy (Bryan Pilkington) who chides Turing for his “bad manners” in committing suicide and proceeds to lead him on a journey back through the course of his extraordinary life. Together the pair revisit events ranging from Turing’s early academic admiration to the rejection that followed his persecution and arrest for homosexuality.

Hallard’s portrayal of Turing shows a man who was brilliant and yet childlike at the same time. When Porgy takes Turing back initially to his childhood, Hallard’s mannerisms and body language create the image of a young child onstage. As Turing’s teddy bear Porgy, Pilkington is highly protective of his young master and the bear’s initial resentment at Turing’s actions give way to a caring relationship between the two characters. Theirs is a close friendship, with the bear acting as a father figure for his master. Hallard and Pilkington are more than ably supported by a strong cast including Diane Beck, Laura Harding, William Hartley and Chris Levens, The four other actors each perform multiple roles, such as Hartley switching effortlessly between the character of Churchill, Turing’s father and his school nemesis Blackwood.

The second act sees an adult and more confident Turing working in America, but also the beginnings of his homosexual encounters. He meets Arnold (Chris Levens) but their initially happy relationship is the start of Turing’s eventual prosecution for gross indecency. It’s a reminder that, even with all he achieved in his work in mathematics, computing and code breaking, these accomplishments were sadly overshadowed for some time. The final scene is both unavoidable and poignant, with Porgy having to say goodbye to his master and friend.

One of the most interesting aspects of this production for me was the use of physical movement sequences throughout. When Porgy presents Turing with a bicycle that will take Alan back to his childhood, the bike is created by the rest of the cast using two spoke wheels and a bell.

The journey is shown through the use of props, including cut out clouds and images of people carried by the actors as they move across the stage. Later, the arrival of a train is created through the use of a mini toy wooden train, accompanied by loud whistles, flashing red lights and the distinctive sound of a steam engine. The set design also reflects both Turing’s complicated work and his mind. Handwritten notes and lines of code in white chalk cover black walls alongside wooden ladders, books, papers, files and randomly arranged colourful pieces of paper. Arranged within these are period items including a metal wind chime, telegrams and a war time gas mask. In the centre of ceiling is a glittering silver disco ball. The sense is one of order that at first appears chaotic, yet is as complex as Turing himself.

As the poster says, Alan Turing could be considered a “Genius. War hero. Deviant”. Whether you believe he is one, all or none of these things is a personal opinion but as the play shows Turing himself was a complex and complicated person who deserves the chance to be understood and appreciated for who he was and what he achieved.

‘Lovesong of the Electric Bear’ is on at the Hope Theatre in Islington until 21st March 2015.

Awoken from his deathbed by his favourite childhood teddy bear, Turing is led by the hand through the journey of his life, from glowing academia to New York drag bars, from triumph to disgrace. Snoo Wilson’s Lovesong of the Electric Bear is an epic, psychedelic and electrifying trip through the life of Alan Turing, the computer visionary and maths genius whose gifts made him the code-breaking hero of World War II, but whose homosexuality led him to betrayal and vilification by the very establishment who had depended on him for victory.

“Nothing is stronger than this love, for I am nothing indeed without you, Master”

Lovesong of the Electric Bear is a wonderfully imaginative, comic and moving play from one of British theatre’s great voices. The production is directed by The Hope Theatre’s Artistic Director Matthew Parker in association with acclaimed Resident Company, DogOrange and by kind arrangement with Snoo Wilson’s estate and Micheline Steinberg Associates.

This show is not without clichés - there are three of note in this production. Firstly, the French horn of the show’s title is personified, speaking … END_OF_DOCUMENT_TOKEN_TO_BE_REPLACED

There’s very little in the way of set in this show: aside from chairs, a few crash barriers and at one point, a red carpet, the actors’ movements … END_OF_DOCUMENT_TOKEN_TO_BE_REPLACED

South African born, but raised on the Isle of Man, Pierre Novellie is a true raconteur rather than just another 'stand-up' comedian. He says about his … END_OF_DOCUMENT_TOKEN_TO_BE_REPLACED

This show, Willy Hudson began by saying, is about himself. It is written by himself, is directed by himself and executive produced by himself. Almost … END_OF_DOCUMENT_TOKEN_TO_BE_REPLACED

The rough and tumble of secondary school life is not a time I recall with fondness by any stretch of the imagination – at the time, if anyone said, in … END_OF_DOCUMENT_TOKEN_TO_BE_REPLACED