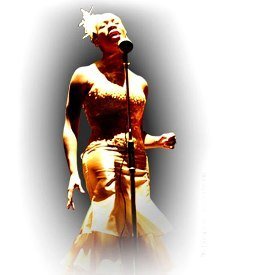 The room is crowded, smoky and dark. You could hear a pin drop as the audience sits motionless, their eyes riveted on the glittering lady on the stage, holding their breath as they wait for her to sing. After keeping them waiting for a long moment, sing she finally does; the first slow velvety notes pour into the room, and that familiar, singular, exquisite voice breaks into ‘Strange Fruit‘. As the final echoes of the song die away, the audience remains motionless, silent, too moved by the bitter-sweet words, too awe-struck by the singer’s talent to even applaud.

No, we are not sitting in a Brooklyn Jazz club in the 1940s, and the dazzling singer is not Billie Holiday, though you could be forgiven for the mistake. This is present day Wimbledon, and the lady on the stage is Nina Kristofferson, slipping into the skin of the incomparable Lady Day. This is not just a tribute act however; over the course of a couple of hours Nina takes us on an emotional roller-coaster through the lady’s life, interspersed with carefully selected songs, performed by Nina and a superb live piano band, to reflect the ups and downs (more downs than ups, to be honest) of Billie’s journey.

It makes for brutal hearing. The childhood rapes, the prostitution, the domestic violence, the drug and alcohol abuse – Nina/Billie spares us nothing. The language is appropriately colourful, the delivery sometimes manic, sometimes wry, sometimes despairing, always Billie. Occasionally the stage dims, an unearthly light glows from the wings, and a beating as of heavy wings floods the air, and Billie pleads with an unseen presence for “just a little longer! A little more time…”. As we watch her slumped upon the stage, a needle hanging from her arm, eyes unfocussed, it is easy to believe that she felt that death was always just over her shoulder, waiting impatiently to take her.

Nina’s tale of Billie’s life focusses essentially on her emotions; very sensibly since love is the theme of most of her hits. She talks about her parents, her battle with addiction, her time in prison, her love for the many unsuitable men in her life. Her professional tribulations, including her many heated altercations with various record labels, are only briefly touched upon. It would have been interesting to have delved rather more deeply into the racial prejudices and humiliations she faced on a daily basis, especially with the glorious and controversial Strange Fruit begging for discussion, but disappointingly this issue was dismissed with a couple of throwaway sentences.

‘God Bless The Child’, ‘Don’t Explain’ (a poignant letter to her unfaithful husband Jimmy), ‘Good Morning Heartache’, ‘That Ole Devil Called Love’; all the old favourites were there, and many more besides.  Nina admits to being a lifelong fan (and enthusiastic hairbrush performer) of Billie, and this love and admiration shines through in her performance. Her imitation was maybe a little too faithful on the first couple of numbers; she sounded rather artificial, as though her determination to infuse the songs with as many of Billie’s quirks and mannerisms were masking her own natural vocal talents. Thankfully these shone through more and more as she relaxed into the role, until she became a shining Nina/Billie Hybrid. What more natural, since as Billie herself said; she never sang the same song the same way twice. “Even I can’t copy me! You’ve got to feel it.”

Gilbert Millstein of the New York Times wrote of Billie’s famous Carnegie Hall performance that though he was shocked at her physical weakness, when the curtains opened “she was erect and beautiful; poised and smiling. And when the first section of narration was ended, she sang – with strength undiminished – with all of the art that was hers” And so it was with Nina Kristofferson. She stood before us, a broken, twitching wreck, and yet when she opened her mouth to sing the purity of her voice was breath-taking, and over her face settled an expression of peace and joy.

The heavenly light shines once more from the wings, Billie gazes into it and smiles. “I’m sorry to have kept you waiting.” She says. And then she is gone.

A mesmerizing and beautiful performance.

Nina Kristofferson’s Billie Holiday Story
A potent, rejuvenating and exotic theatrical cocktail of songs and stories from Billie Holiday’s extraordinary but tragically short life, the show stirs up haunting memories, harrowing stories and glorious comic and uplifting moments from Holiday’s journey from poverty to stardom.  It also features some of Billie’s greatest songs: Strange Fruit, God Bless the Child, Lover Man, Don’t Explain, All of Me and many more.

The pairing of work by Bob Dylan and Leonard Cohen in a single recital is a logical move. Though the latter died five years ago, his and his old … END_OF_DOCUMENT_TOKEN_TO_BE_REPLACED

If the dialogue wasn’t quite so eclectic and engaging, I might have decided to attempt to have kept a tally of how many times a trestle table is … END_OF_DOCUMENT_TOKEN_TO_BE_REPLACED

Doctor Who: Time Fracture by Immersive Everywhere has plenty to exhilarate both avid and casual Doctor Who fans, delivering on its promise to let … END_OF_DOCUMENT_TOKEN_TO_BE_REPLACED

A brief review of a brief play. It is, as the Prime Minister (Lisa Day) observes, extremely unlikely that her ‘letter of last resort’ would ever … END_OF_DOCUMENT_TOKEN_TO_BE_REPLACED

It’s a production of Hamlet that starts at 7:30pm and manages to come down on the ‘right’ side of 10:30pm - the hardcore fans and followers of … END_OF_DOCUMENT_TOKEN_TO_BE_REPLACED