You are here: Home / Reviews / Review of Pride and Prejudice at Richmond Theatre 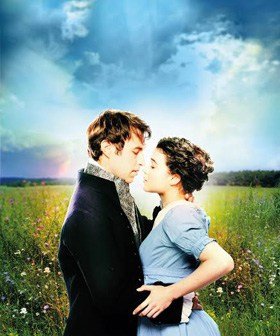 “In the possibilities of your female apparatus resided all of your prospects, any respect or admiration you may command. And yet, the centrality of marriage didn’t make it a foregone conclusion, by any means.”
Even an article in the programme for this production of Pride and Prejudice reads, albeit very broadly, like a Jane Austen novel. Overall, things are kept reasonably light-hearted in this stage adaptation, and even in its darkest moments, there’s a sense that all will turn out all right in the end. After all, Austen began the final chapter of her novel Mansfield Park with the words, “Let other pens dwell on guilt and misery,” and that philosophy is portrayed with verve in this play.

Mr Bennet (Matthew Kelly) does not seem to mind the company of other people as much as he says he does, and Mrs Bennet (Felicity Montagu) carries an air of self-confidence that rather betrays her apparent nervous disposition. Even when she is upset, her state of distress is not convincing, and the scene crosses firmly into melodrama. I do not state this as a criticism – on the contrary, the scene solicits much laughter from the audience. There’s a metaphor there somewhere about how what is said is sometimes incongruent with what is meant, a very British trait.

In bringing Austen’s novel to the stage, the production assumes a lively atmosphere throughout, even if supposed private conversations between characters are fully projected to the back of the upper circle almost as though this were a panto. Nuanced? No. But I enjoyed the larger-than-life personalities, particularly the almost over-enthusiastic nature of Mr and Mrs Bennet’s daughters, who seem to be delighting in practically everything. It’s an absorbing show: I probably would have identified most greatly with Mr Darcy (Benjamin Dilloway), stern-faced and solemn, before seeing this stage adaptation. Having seen it, I am probably now more closely aligned with Mr Bennet, who may not be creating much of the fun – if any of it – but is enjoying proceedings nonetheless.

In seeing a show of this nature, there is a part of me that wishes I had more of a general interest in costume design. The costumes are certainly exquisite, though I cannot honestly vouch for their absolute historical accuracy. Nothing seemed outlandishly out of place to me.

There’s a fair amount of silliness. Take, for example, Mr Collins (Steven Meo) – the characters here, as well as the audience, are spared the dry sermonising from this clergyman more prevalent in the novel. On stage he is more hilarious than sombre, only to later become shockingly tactless, and not at all what a minister of religion would reasonably be expected to be like.

This isn’t an adaptation for everyone. Some will think it too light-hearted, downplaying too much the deeper and weightier aspects of Austen’s novel. With one exception: even this cultured audience found themselves audibly gasping as Darcy lets his true opinions known to Elizabeth Bennet (Tafline Steen). I must say I was surprised at how pleasurable and amusing much of the rest of it was.

The ‘movement’ (not choreography, interestingly), directed by Sian Williams, is excellent, depicting first-time meetup awkwardness in one scene and assertiveness between friends and acquaintances in another. This may well be a period production but certain characters are recognisable even in today’s more advanced and sophisticated world. There are still snobs. There are still interfering busybodies. But take heart: there are still young and impressionable women, with thoughts, feelings, and emotions. They, like this play, are simply marvellous. A vigorous and refreshing production.

Following sell-out performances in London, Regent’s Park Theatre’s critically acclaimed production of Jane Austen’s Pride and Prejudice, adapted for the stage by Simon Reade, will embark on a major UK Tour this Autumn, visiting Richmond Theatre from Tue 15 to Sat 19 November. Pride and Prejudice marks the return of Regent’s Park Theatre to Richmond following their smash hit productions of To Kill a Mockingbird and Lord of the Flies.

One of the most universally loved and quintessentially English novels of all time, Pride and Prejudice tells the story of the Bennet family and their five unmarried daughters. A family of humble means, Mr. and Mrs. Bennett see the perfect opportunity to improve their social standing when the wealthy Mr. Bingley and his eligible friend Mr. Darcy move to the neighbourhood. But while Bingley takes an immediate liking to their eldest daughter Jane, the dismissive Darcy instantly clashes with the Bennet’s headstrong second daughter, Elizabeth. As the Bennet sisters haplessly search for love in Jane Austen’s ultimate romantic comedy, it is Mr Darcy who unwittingly finds his match.