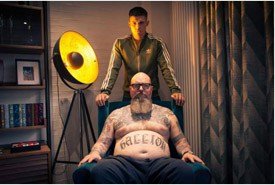 Sometimes as a reviewer, a show is just too mysterious to miss out on and when I was invited to be somewhere near Canning Town Underground by 7:45 on a Sunday night, and not wearing heels, well my curiosity was certainly aroused. Arriving with my companion, we were met by a cheerful chap who sent us across a bridge onto the Secret Island where our theatrical evening began in fine style.

Now, this is where things get interesting. The Secret Theatre show starts before it begins – believe me you will understand when you are there – and there is much to see and listen to before the action ‘formally’ kicks off. So this is where I have a problem as a reviewer. Normally at this point I would be telling you some of the plot, the characters and the actors but this is a Secret Theatre Show so I can tell you very little. All I will say is that the show was not at all what I was expecting, in fact I was really pleasantly surprised when it started as it was a story I both know and love.  Let’s be honest, once it starts and you realise what it is, you will be very impressed with both the choice of play and the rather unique East London twist that has been skilfully manoeuvred in.  Over the course of a couple of hours, there is love, hatred, comedy and tragedy in equal measure along with a clash of cultures which has profound effects on the characters. The very strong cast really put their all into the performance, particularly in the graphic physical scenes, as the very family-centric tale unfolds around the site, this is promenade theatre, hence the no heels warning.

So, what can I tell you about the show, aside from the hints above? Well, it is outside so, even though it is summer, make sure you have a cardigan or something as it gets a bit chilly when the sun goes down, although the fading daylight is a wonderful backdrop to the action itself.  This is a show with a fine cast and Director who really knows how to make the best use of the space available to deliver a captivating show. The cast are very good not only at delivering a believable piece of theatre but also at interacting with the audience right from the start. Moving from scene to scene feels natural and is deftly accomplished by the very engaging cast members so that it never feels like a move is ‘forced’ or unnecessary. The only criticism about this is the noise that an audience makes when walking on gravel, which was sometimes quite loud and distracting.  However, on the whole, the ambient sounds of East London added to the realism of the piece itself.

To summarise then, If you are willing to take a leap of faith into the great unknown and like your theatre to be immersive then this production by Secret Studio Lab is definitely for you. If you really prefer to sit in an auditorium looking at a proscenium arch, then do something extraordinary and go and see it as well, you will be amazed at the experience.

Britain, so a London cab driver once told me, is obsessed with the Second World War, as though it happened just recently. Power Luncheon would seem, … END_OF_DOCUMENT_TOKEN_TO_BE_REPLACED

William J Dunleavy, author and star of this monologue play, is a writer and face to watch. He enters the room (as the staging is more geared towards … END_OF_DOCUMENT_TOKEN_TO_BE_REPLACED

Cirque du Soleil’s Luzia is a joyful whirl through a psychedelic Mexico, which reminds us why live theatre is so special. Anyone who goes to … END_OF_DOCUMENT_TOKEN_TO_BE_REPLACED

I am always very excited to come across a new theatre, and Esher Theatre is a real ‘find’, conveniently situated near to Esher High Street and right … END_OF_DOCUMENT_TOKEN_TO_BE_REPLACED

Cecil Sharp is no unsung hero. Without the energy of this driven and at times prickly musician, the traditional folksong of rural England would very … END_OF_DOCUMENT_TOKEN_TO_BE_REPLACED