Home » London Theatre News » Review of SINATRA: THE MAN AND HIS MUSIC at the London Palladium 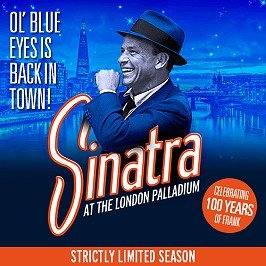 My first thought before the show was that there would be a screen on stage with performers ‘dueting’ with Frank Sinatra. No, that isn’t the case at all. There are no live performers either singing with or impersonating Sinatra. All of Sinatra’s songs are performances from years gone by and played on screens. This was okay for the first 5 minutes but swiftly lost its appeal, and I was bored about 30 minutes in – or that is when I gave up trying to fake enthusiasm for what I was watching. Don’t get me wrong, there is a live orchestra and they are great. There are dancers and they’re okay but seemed to be going through the motions more than enjoying a fantastic performance. The choreography is nice but not outstanding. It is also very impressive with the archive footage and the way they present it – a lot of time must have been spent editing it! Sinatra is Sinatra, and the songs are what you would expect from a recording – sometimes there is some ‘static’ noise and in others it is a clear recording.

Visually it is impressive, so congratulations to the production of the evening. Occasionally the orchestra seem a touch too loud for the recording of Sinatra, but on the whole it blends well. It works well with Sinatra narrating the evening, but that should be where the video side of things stop and a live performance takes over.

‘My Way’ got a good reaction and was quite entertaining, and you could feel the audience’s sadness when the JFK connection with Sinatra was shown. Sadly though I didn’t get the normal energy from the audience that you get during a good theatre performance, and often the applause sounded polite and not enthusiastic. I attribute this to the singing being recorded, as it is difficult to applaud a recording from a performance years ago no matter how good the orchestra are and how much effort the dancers make.

For me, I feel let down by the evening. It would have been a great TV programme to watch but was a poor theatre experience. I think you would have to be a massive Sinatra fan to want to spend the evening watching a video with live music and dancing.

SINATRA: THE MAN AND HIS MUSIC
Start spreadin’ the news!
In his centenary year, the magic of Frank Sinatra will be returning to the London Palladium, 65 years after he made his UK debut on the same stage in 1950.
Using rare footage of the legend himself, a 24 piece orchestra and sensational live dancing SINATRA: THE MAN & HIS MUSIC is an extraordinary new multi-media concert celebrating one of the world’s greatest entertainers. Featuring Frank Sinatra’s greatest hits, including Fly Me To The Moon, My Way and New York, New York. Experience the legendary Frank Sinatra in concert; the man who always did it his way.