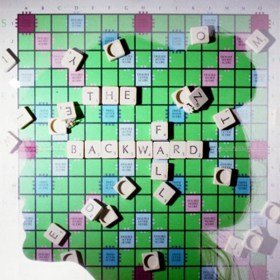 It doesn’t sound like a very funny story. Two sisters meet one Sunday afternoon to finish packing up their childhood home, after the recent loss of their mother, Etta, to Alzheimer’s. Reliable older sister Lilly has only just moved out, having stayed to care for her mother until the end, while drama queen Clara couldn’t wait to get away, and even now is convinced the worst thing that’s ever happened to her is hitting a rabbit with her car.

As they work, the sisters – along with Clara’s long-suffering husband, Alexander – argue, joke, reminisce, and finally begin to exorcise some of the demons that have plagued their relationship for years. And, surprisingly, it is funny, and at the same time, devastatingly sad.

The Backward Fall is a story that’s developed over many months, and which has changed significantly since it was first performed by Penny Productions in January. Then, the story focused on Etta during the early stages of Alzheimer’s, and the effect of her condition on the rest of her family. In the final, revised adaptation, Etta’s absent, but her daughters continue to be affected. This shift acts as a powerful reminder that this terrible and life-changing disease has just as devastating an impact on families and loved ones as it does on those directly suffering from it.

The writers – Kathleen Blades, Natalie Cooper and Aimee Potter – have clearly poured their heart and soul into the play, piecing it together based on stories, research and interviews with Alzheimer’s sufferers and their families. The result certainly packs an emotional punch, and even those of us who’ve never been affected by the condition will be able to recognise elements of our own families in what’s happening on stage. The relationship between the two sisters is particularly well-written, although Clara is, on occasion, just a shade too self-absorbed to be completely believable. (When Lilly asks Alexander how he puts up with her sister, she’s speaking for us all.)

While Clara may be hard to love, Rochelle Thomas plays her beautifully, veering from breathless hysteria to icy silence, but with a vulnerability born of guilt, which shows through more and more as the play goes on. Ruth Sanders is quietly brilliant as Lilly, a woman used to suppressing her emotion and just getting on with things. She also, during the heartbreaking flashback scenes, plays an increasingly distressed and confused Etta. Meanwhile Oliver Gully provides much of the comic relief as Alexander, awkwardly trying to relieve the tension between the two sisters, with varying degrees of success.

Though most of the action takes place in the present day, the play also recreates specific memories, each of them marked by a simple but effective lighting change, from the harsh light of reality to the softer, sepia tones of nostalgia – and back again. There are also some scenes of physical comedy, set to music, which ease the tension both on and off stage, and remind us that sometimes a bit of silliness is exactly what the doctor ordered.

If I had one complaint, it would be that the play at times feels a little disconnected, although perhaps that’s to be expected in a piece that’s composed of many different stories. I heard another audience member remark on the way out that she wished the play were longer, and I can’t help but agree – not only because it’s enjoyable, which it is, but because some of the plot threads are left dangling as we jump to the next scene. What seems to be a particularly significant moment between Clara and Alexander, for instance, is cut short when the two sisters – who were arguing bitterly only minutes before – suddenly reappear giggling, having raided their parents’ wardrobe. And so the story moves on, and we never return to that earlier moment, or find out how it ended.

But this quibble aside, The Backward Fall is a powerful and emotional play, which makes its point whilst remaining enjoyable to watch. The fact that it’s based on true stories, about real families affected by Alzheimer’s, only increases its impact, and if you leave the theatre without a lump in your throat then you’re made of sterner stuff than I am.

The Backward Fall: A Story With Alzheimer’s
Thursday 13th August – Sunday 16th August 2015 at The Hen and Chickens Theatre as part of the Camden Fringe Festival.

Have you ever heard a story that brings out laughter yet leaves you devastated at the same time? ‘The Backward Fall’ does exactly that. Co-Founder Aimee Potter says that “The Backward Fall tells the story of a family who are going through what so many people are today.” It is at times hyper-realistic and at others, surreal. A story of a family who are still learning to live with Alzheimer’s. As two sisters pack up their parents’ house, they invite you to look through their hearts, minds and moving boxes, as they reminisce on family life and how they’ve been affected by their mother’s condition. In this play, everybody is a sufferer.

The play explores all the other struggles within their family, as Co-Founder Natalie Cooper says,“after all there never seems to be just one thing affecting a family at one time.” The story is an adaptation formed from stories, interviews and research of Alzheimer’s sufferers and families. Co-Founder Kathleen Blades says that “we want to allow audiences to laugh and recognise themselves in our family”. Penny Productions presents a reimagined and retold version of their debut show ‘The Backward Fall’ for The Camden Fringe Festival 2015. Showing at The Hen and Chickens Theatre, Highbury and Islington.

People are like swans. Hopefully, that’s got your attention and while you may be questioning my statement, it is true.  We all have a surface that we … END_OF_DOCUMENT_TOKEN_TO_BE_REPLACED

In case anyone in the audience didn’t know what a toilet looks like, a neon sign reading ‘Toilets’ hangs in between, well, two toilets. There probably … END_OF_DOCUMENT_TOKEN_TO_BE_REPLACED

Dolly Parton’s musical 9 to 5 sets out to do one thing: ENTERTAIN, and it does this superbly. The show has just started an extended tour at Wimbledon … END_OF_DOCUMENT_TOKEN_TO_BE_REPLACED

I feel so comfortable here in this large airy Church, seating is socially distanced and face mask compliance is at a level that some large West End … END_OF_DOCUMENT_TOKEN_TO_BE_REPLACED