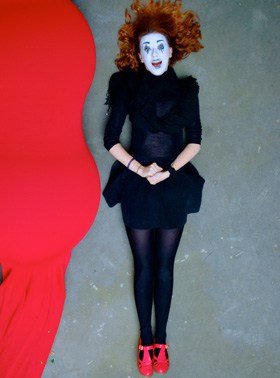 The Eugene Ionesco absurdist drama ‘The Bald Soprano’ has a 3 day run during the Camden Fringe this year and it fits the bill for exciting and experimental new work perfectly. In the black box of the Etcetera Theatre the UCLU Drama Society played out the ironically tragic effect that our failure to communicate honestly can have on the quality of our relationships; on how our desperation to tell the stories that we think people want to hear, belies the truth of the stories we need to tell.

The afternoon was spent in the company of two middle class couples, the Smiths and the Martins, a maid and a fire chief, who struggle for dominance, validation and a chance to be heard. Given our 2015 obsession with instant communication and individuality I don’t think this play could have been better timed. The direction by Emily Louizou stripped the characters of the complexities of human nature leaving them with, both visually and characteristically, the essences of the person that we choose to extract and simplify to on a daily basis. When our public profile is constructed based on the photos we choose to edit and share on Facebook, Twitter and Instagram, it seems that Louizou has recognised the final and surprising extrapolation that Ionesco was recognising when the play was conceived during the late 1940s. Relevant now, just as it was then, to satirise the lack of truthfulness on a human scale in the face of conflict and social upheaval, the universal nature of this play is profoundly affecting.

Of course also hugely comedic ‘The Bald Soprano’ was a great watch, allowing the audience to find the hilariously funny in their recognition of the characters we giggle about on a daily basis in real life, while finding the humour to identify aspects of ourselves among them. The cast were uniformly skilled and adept in their approach. As a fan of the absurd I’d be a returning audience member and I found this a truly satisfying performance of a great piece of writing.

This production of Ionesco’s classic play offers an exciting version of an absurd tale which is simultaneously hilarious, tragic, and profound. Two quintessential middle-class couples, their maid, and a fire chief determined to extinguish all fires in the city, try to reach some form of meaningful conversation during what seems like an ordinary dinner-party. However this dinner party is anything but ordinary!

Ionesco satirizes in the most bizarre way how people fail to communicate and to connect in today’s society. In our frantic efforts to make our own voices heard, we not only miss what other people around us say, but also what we really need to say ourselves.

We promise you will laugh, but… we cannot promise that any resemblance to real persons or situations will be purely coincidental!

This happens to be a timely production: employment has hit the headlines again at the time of writing, this time because of the concept of ‘quiet … END_OF_DOCUMENT_TOKEN_TO_BE_REPLACED

An opera (well, technically, an ‘opéra comique’, as there is spoken dialogue) in a relatively small space like the Charing Cross Theatre calls for … END_OF_DOCUMENT_TOKEN_TO_BE_REPLACED

Shoes, one would have thought, are fairly recession-proof. The problem for Charlie Price (Joel Harper-Jackson, reprising the role he previously played … END_OF_DOCUMENT_TOKEN_TO_BE_REPLACED

The descriptions of what happens in this show are so vivid that paradoxically they leave nothing to the imagination – and, at least at the performance … END_OF_DOCUMENT_TOKEN_TO_BE_REPLACED