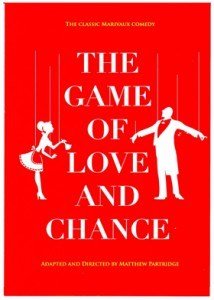 Marivaux’s “Le Jeu de l’amour et du hazard” was first produced in 1730 and over the years the debate has been as to whether it is a true “French Farce” or more a Comedy of Manners, Sex and Class. Matthew Partridge, adapter and Director, takes the latter view and successfully so. The setting in the London of the mid 1960s is clever and works well. I remember at that time being invited to the 21st Birthday party of a friend who was a bit of a Toff (I wasn’t!). The party was full of delicious but rather snobbish girls and vacant rather silly young men. Sylvia in this production at the intimate Barons Court Theatre fits perfectly into the type of the former. Gorgeous, but snobbish and superior and rather too pleased with herself. A lovely and wicked portrayal by Flora Ogilvy. The swapping clothes and identities plot just about works in Swinging London, with a bit of poetic licence! Elicia Murphy as Sylvia’s maid Lisa looks at home in her mistress’s Mary Quant dress but she doesn’t attempt to put Kensington into her speaking voice which stays firmly, and funnily, Estuarial!

Partridge introduces a couple of new characters. Alexis Coward plays Georgia the “Matchmaker” with restraint and well – but I found the character a little odd as she is not in the original and I don’t recall many matchmakers around in London in the sixties! No matter Coward is a fine comic actress and held the attention. Similarly Nina Tolleret is an addition to Marivaux’s play as Sylvia’s raunchy stepmother Maria. Ms Tolleret is a French actress and clearly enjoyed this part, as did the audience.

Was London in 1965 as class-ridden as the France of Louis XV? Of course not, but satire though it is “The Game of Love and Chance” makes some valid points about those times and is shrewd and well-observed. The cast keep the story moving at a good pace (there is no interval) – a delightful evening.

MARIVAUX’S CLASSIC FRENCH FARCE GIVEN A SIXTIES TWIST!
It’s 1965 and while London is swinging, matchmaker Georgia has been hired to find a husband for spoilt Sylvia. Georgia thinks she has finally found the ideal man, wealthy Dorian Addington. However, Sylvia insists on swapping places with her maid Lisa so she can see what he’s really like. What Sylvia doesn’t realise though is that Georgia has anticipated this and has also asked Dorian to swap with his manservant Charlie. And if all that wasn’t bad enough, Sylvia’s oversexed French stepmother has a thing for servants….

“Keep it shallow, keep it pretty, keep it moving,” declares Justin Vivian Bond, letting the audience determine for themselves what precisely is really … END_OF_DOCUMENT_TOKEN_TO_BE_REPLACED

This play didn’t do that well on Broadway the first time around in 1963, and did worse the second time around, even with a revised script, running in … END_OF_DOCUMENT_TOKEN_TO_BE_REPLACED

One of the very few good things about the COVID pandemic is that the opportunities to live stream theatre performances have increased exponentially, … END_OF_DOCUMENT_TOKEN_TO_BE_REPLACED

Exploring both the Jewish and Christian faiths, Candlesticks in some ways puts forward some good arguments for systems of belief that exist entirely … END_OF_DOCUMENT_TOKEN_TO_BE_REPLACED