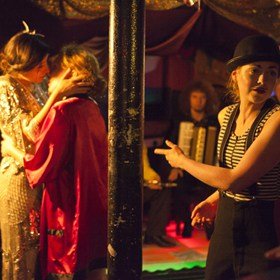 Haste Theatre’s retelling of Theseus and the Minotaur is among the top recommended fringe productions on the circuit at the moment. I was fortunate to catch it at the Bread and Roses Theatre in Clapham. It is devised and acted, snogged, tap danced, sung and clowned through by five female company members, each of whom dazzles, Twenties-style and in their own way. I love it that theatre, even in the West End, is discovering the merits of brevity. The Hideout comes in at about an hour with no interval, leaving time for dinner afterwards, or to get home if you need to make an early start the next day. Or, after seeing this, perhaps even your own evening of “all out debauchery”, the entertainment promised of the play on the Haste Theatre website.

And it certainly tantalises with promise, especially the mischievous and bewitching Jenny Tiger-Lily Novitzky as Aphrodite. Elly Beaman-Brinklow, a physical theatre graduate and trained in ballet, tap and contemporary dance, moves around the stage with the demonic grace we would expect of Hades. Sophie Taylor, also a physical theatre graduate, is a little pocket goddess, not so much a pocket Venus though, more a mini-male WWE wrestler. The “six-pack” stencilled on her enviably toned tummy pencils the muscle in and draws the comedy out of hot-headed Theseus. Italy-trained Eleanor Constanzi is a class act, with her “Roman” dignity tempering the excesses of the Greek gods and goddesses as they meddle frivolously and heartlessly in her love life. Clarinetist Jesse Dupré, who has performed in the London Gypsy Orchestra, give us music on this stage to show that there is so much more to the dissolute Dionysus than drunkenness. She seduces us all, men and women, into forgetting who we are for this hour of uproarious comedy about love, fate, chance and destiny.

Partly the joy is that these highly trained and gifted professionals are clearly having the time of their lives in this production. But mostly the pleasure is in the craft of the script and the quintuple-threat performing, a cast at the top of the game in acting, singing, dance, playing musical instruments and script-writing. This is the kind of comedy that so much fringe aims for, not always successfully. This one hits the mark with that essential “fringe factor”.

Just a word of advice if you do go and see it. There is quite a lot of audience participation. Be prepared. You might even be called upon to help kill the Minotaur.

Haste Theatre welcome you to join them for an evening of all out debauchery.
It’s the 1920s and the Gods of Olympus spend their nights in Dionysus’ boudoir, looking for entertainment by playing with the lives of the little people below. But have they bitten off more than they can chew as they attempt to meddle with the headstrong Ariadne, the courageous Theseus and the small matter of a Minotaur that needs defeating?
Through a heady mixture of clowning, gypsy jazz and dance, The Hideout is a riotous collision of Greek mythology and the Kit Kat Club.
http://hastetheatre.com/the-hideout/

The thing about Panto is not to over-think it. It’s about having fun and surrendering to the Christmas spirit. Like Christmas crackers, there is a … END_OF_DOCUMENT_TOKEN_TO_BE_REPLACED

Anyone who's worked in investment banking knows it's largely an intellectually-free zone, polluted with people who calculate each other's value … END_OF_DOCUMENT_TOKEN_TO_BE_REPLACED

By the production’s own admission, the version of events as detailed in Bonny & Read is unlikely to equate to an exactly full and fair account of … END_OF_DOCUMENT_TOKEN_TO_BE_REPLACED

This early Rattigan play has had an interesting life. Set in the Second World War and premiered while that conflict still raged, it has since found … END_OF_DOCUMENT_TOKEN_TO_BE_REPLACED