Home » Reviews » Review of The Liberty Tree at the Cockpit Theatre 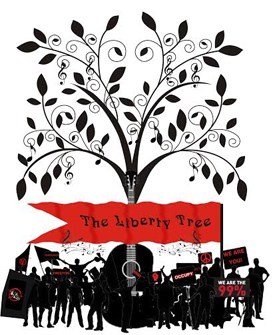 It’s gratifying to see a theatrical production that so whole-heatedly embraces the need for political activism. In this current climate of austerity and government swindling, the need for clear and didactic lessons in how to propagate positive change has never been more necessary. As evidenced by the recent electoral farce, subtleties aren’t really cutting it anymore.

The Liberty Tree is a collaboration of students and activists who have identified this niche and gleefully claimed it; using theatrical metaphor to illustrate the shackles of fear that bind us to a system where over-regulation, censorship and greed strip us of our humanity, this company revels in a musical story which satirises our acceptance of the status quo and provides us with an alternative attitude to life.

The Liberty Tree takes for its narrative structure the basic pattern of The Wizard of Oz and makes it a lot less subtle and a lot more applicable to 2015. Using the realm of fantasy to liberate the theatre makers from realism gives so much scope for this story to be comedic but also cuttingly true in all the right places. In fact, at times, there was so much truth in what the ensemble was saying, that I felt slightly depressed; after all, often one goes to the theatre to escape rather than be confronted with the unpalatable truths we all live with on a daily basis and despite the necessity, these truths can be ever so hard to stomach. When a noose made an appearance on stage I fear many people in the audience had to stifle an uncomfortable moment of familiar proximity of this symbol of the terror which we constantly live with.

While the cast aren’t quite ready for glittering West End careers just yet, there are some promising talents amongst them and the energy with which they suffuse the production is sufficient to forgive the fairly frequent errors in basic stage craft and tuneless singing. With more detail to technical competence this production could be the experience that disillusioned and jaded Londoners need to feel a convivial connection with their equally suffering peers, to jump off their seats and shout, ‘Vive la Revolution’. Jim Lavender as B. Dogg was a sympathetic watch and Sinead Doherty a stand-out character in the ensemble. Joshua Lowe as Orville T Blush is clearly adept at comedy and was rather underused, but his moments of comedy were singularly brilliant.

The score is a mixture of recognisable tunes (I Need a Dollar) and original music and is completely self-effacingly clumsy (a version of Les Miserables’ I Dreamed a Dream made a hilarious appearance). This is a production which can be enjoyed not perhaps with theatre going friends but with those who share your left wing leanings and your inner, suppressed, anarchist. Bring along your socialist Dad and let him tell you, again, how Thatcherism butchered our country and you’ll be in the right company for this thoroughly enjoyable watch.

The Liberty Tree
Rosa is a young woman working in a Call Centre (the electronic sweatshops of the 21st Century). She witnesses a manager cruelly bullying a colleague but does nothing. A fellow worker, Joe, does intervene and is sacked. That night Rosa is tormented by her cowardice in the face of such injustice. As she sleeps she dreams and when she awakes she is trapped in the grotesque, The Land Of Do What You’re Told. She soon discovers that the only way out of this land of obedience and subservience is to go on a journey to find The Liberty Tree…

The show is performed by students and young activists and is an inspiring night out for all lefties, radicals, socialists, anarchists, trade unionists and fellow travellers.

The Liberty Tree is deliberately aimed at these young people, students and young trade unionists, and is an attempt to address this failure of education but not through lectures and textbooks, but through the vehicle of a large-scale musical which uses drama, music and comedy to demonstrate the political realities of how power is expressed and to extol the virtues of collective political action as a response of the powerless to the abuses of the powerful.

The Liberty Tree
A rebellious, feel-good, jukebox musical for anyone sick of being overworked, underpaid and powerless.
Wednesday 24th June to Saturday 27th June 2015
http://www.thecockpit.org.uk/

How can a play be both charming and devastating? Through its tight script, abundant humour and pitch-perfect performances, 4th Country manages to … END_OF_DOCUMENT_TOKEN_TO_BE_REPLACED

Britain, so a London cab driver once told me, is obsessed with the Second World War, as though it happened just recently. Power Luncheon would seem, … END_OF_DOCUMENT_TOKEN_TO_BE_REPLACED

William J Dunleavy, author and star of this monologue play, is a writer and face to watch. He enters the room (as the staging is more geared towards … END_OF_DOCUMENT_TOKEN_TO_BE_REPLACED

Cirque du Soleil’s Luzia is a joyful whirl through a psychedelic Mexico, which reminds us why live theatre is so special. Anyone who goes to … END_OF_DOCUMENT_TOKEN_TO_BE_REPLACED