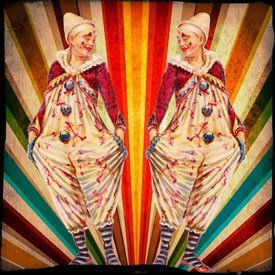 Sometimes it is easy to forget that along with some pretty amazing tragedies, William Shakespeare also write comedy. One of the best examples of these works is currently on at The Space, Canary Wharf where the Pell Mell Theatre Company are presenting “Twelfth Night or What You Will”.

In a music hall in Illyria, the Master of Ceremonies, Duke Orsino (Aqil Zahid) is being distracted by his love for the fair Olivia (Lucy Laing) but she is not interested being grief stricken by the death of her brother. Olivia has problems of her own in the form of her debauched uncle Sir Toby Belch (Stephen MacNeice) who, when not carousing and raising hell is trying to get her to wed his naive young friend Sir Andrew Aguecheek (Angus Howard). Making up Olivia’s household are her maid Maria (Caroline Short), her Fool Feste, Lawrence Boothman) and her Steward, the straight laced and pompous Malvolio (Andrew Seddon). With me so far? Good because into the mix we now add Viola (Ella Garland) who has made her way to Illyria after being shipwrecked and losing her twin brother Sebastian (David Lenik). On arrival, Viola disguises herself as a young boy named Cesario and enters the service of the Duke. Sent by Orsino to court Olivia on his behalf, Cesario/Viola hits a major snag as the lady falls for him/her, little knowing that, in the meantime, Cesario/Viola has fallen in love with the Duke – as love triangles go they don’t get that much more complicated.

Obviously, for Shakespeare one plot is not enough so we have a separate story involving Sir Toby, Sir Andrew, Maria and friends – Valentine (Luke Jasztal), Balthazar (Mike Wooster), Lorenzo (Kiefer Bryson) and Stephano (Callum King) – playing a cruel trick on Malvolio, leading to problems with yellow stocking, gaiters and a bit too much manic smiling. But what of Viola’s twin brother Sebastian I hear you ask? Worry not, because what you need with a story like this is for someone to turn up that looks exactly like his sister pretending to be a boy. Luckily sea captain Antonio (Gareth Adams) had rescued Sebastian from the sea and was bringing him up to Illyria to add to the confusion. Will the various knots be untied and happiness prevail for all by the end? Only one way to find out.

I have to admit that for the first few minutes, I really wasn’t sure about this production of “Twelfth Night”. The Space is marvelous – it’s an old church – and the stage looked lovely with a curtain that is difficult to describe but felt just right for the staging. Everyone came out and were sort of introduced to the audience, whilst doing circus/dance type things and then the action started. All a bit odd you might think, as indeed I did. However, within a few minutes I knew I was going to have a wonderful time with this production and so it proved to be. Director Natalie York’s setting in a decayed, decadent Victorian music hall works so well. Particularly the idea of making Viola and Sebastian identically dressed clowns really reinforcing the idea of them being twins and making it so much more believable than some other productions I have seen. Costume designer Giulia Scrimieri has come up with some wonderful outfits for the cast. Along with the clown costumes, my favourites were worn by the very tall and upright Andrew Seddon as Malvolio who undergoes an awesome transformation from the puritanical immaculately turned out popinjay in the first act to the maniacal fool of the second. An example of where fantastic costume and superb acting are completely in synch with each other. On every level this was a really strong cast that were obviously enjoying the fruits of their labour nearly as much as the audience. I’m going to give a mention to the four ‘boys’ – Luke, Mike, Kiefer and Callum – who did so much throughout the performance. Moving sinuously around the stage areas they had a multitude of roles within the show and were wonderful in their movement and performance. And I can’t leave without mentioning Lawrence Boothman as Feste, the Fool. This is one of those roles that could easily go over the top in its delivery but Lawrence kept the Fool’s character in check so he never became irritating but was in fact one of the best loved, for me at least, characters in the entire show.

To summarise, “Twelfth Night or What You Will” is basically Shakespeare at its best. The story and various sub-plots are convoluted but still easy to follow for the audience. There is a lot to be read into the plot itself with its take on gender identity and sexual attraction, not just with Viola but, my companion and I had quite a conversation about the relationship between Sebastian and Antonio. All told then, this production with its lovely location and excellent delivery is spot on. A wonderful evening’s entertainment and I wish I could give it 12 stars to match its title, but alas 5 will have to do.

In his decadent, decaying music hall Orsino, a maniacal master of ceremonies, is desperate to pull his former leading lady Olivia, lost in a sinkhole of depression, back onto the stage and into his arms. The only one who can bring a smile back to her face is Orsino’s newest recruit, the clown Cesario, a youth with remarkable talents, not only for avoiding uncomfortable questions about the past but also, it seems, for appearing in two places at once…

Using Shakespeare’s stunningly lyric text alongside a wide range of live music, dance and circus performance Pell Mell presents a bold, boisterous exploration of love, madness and identity as storms rage, families break apart and a steward called Malvolio comes to regret his choice of Director Natalie York says “Shakespeare’s text is packed so full of music, magic and deception, for us it fitted perfectly in the world of a theatre where no one is quite who they say they are or what they want to be. The hierarchies, petty jealousies and wild emotions that drive this twisted, brilliant comedy take on a new sense of reality and absurdity amongst gossiping showgirls, arrogant leading ladies, unpredictable clowns and obsessive fans.”

Pell Mell Theatre Company brings its trademark extravagant style to bear on this rich, multifaceted play. Working with the best emerging designers and composers to draw back the curtain on a living, breathing Victorian theatre, from the opulent productions to the grimy backstage nooks and crannies. Off West End Award nominated choreographer Thomas Michael Voss will be masterminding a dazzling range of dances, acrobatics and variety entertainment to bring every moment thrillingly to life.

About the Space
Patron: Sir Ian McKellen
The Space is a performing arts centre based in a converted church on the Isle of Dogs, East London. It has received critical acclaim for its productions such as A Doll’s House, The Caucasian Chalk Circle, and most recently Festen. It programmes over 200 events a year incorporating an exciting mixture of theatre, music, comedy and dance. Its in-house theatre company SpaceWorks provides regular weekly workshops in performance and training in a wide range of technical theatre and arts administration skills.

Handel’s 1738 opera Serse (or Xerxes) is an exploration of power, love and human frailty. King Serse falls in love with the voice of his brother … END_OF_DOCUMENT_TOKEN_TO_BE_REPLACED

Lea Salonga has her fans. She also has some superfans, the ones who yell, “I love you Lea!” at almost every opportunity. If that wasn’t enough, there … END_OF_DOCUMENT_TOKEN_TO_BE_REPLACED

I have no hesitation in saying that the 1952 movie “Singin’ in the Rain” and its 1985 stage version is one of the greatest musicals of all time, … END_OF_DOCUMENT_TOKEN_TO_BE_REPLACED

There are, Maria Caruso was keen to emphasise in a post-show discussion, no wrong answers when it comes to responding to Metamorphosis or even … END_OF_DOCUMENT_TOKEN_TO_BE_REPLACED

Children of the Windrush generation, sisters Dawn and Marcia, grew up in the 1980s. In Roy Williams’ new play Dawn is shown struggling to care for … END_OF_DOCUMENT_TOKEN_TO_BE_REPLACED