Home » London Theatre News » Review of Without Reluctance and Without Relief 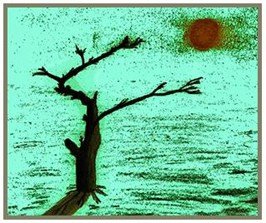 At the Brockley Jack Pub, Well more the Jack Studio theatre, there is loss. Three monologues put in one play by resident writer Howard Colyer. The audience get welcomed with a moody atmosphere, fog and a violin playing in minor. Three tables are spread over the stage which I thought would represent the three stories, I was wrong. There is a chair that just stands there for most part of the play.

The first monologue “Again” saw Warren Taylor as a drunken man. Drunken because his girlfriend left him for a Job and as we all do, he is trying to convince himself that he is better off without her. Before we all knew what was going on the monologue was finished.

The second monologue “ You take the 321” we are introduced to a young woman, played by Avita Jay, who’s Indian parent s are against her being in London, well Deptford to be more precise. Her parents, although never lived there themselves, keep writing to her, pushing her to move to Bombay. As any youngster wanting to stand on their own feet, she ignores her parents. When her tenant dies and she goes through his stuff, she gets intrigued and fascinated by his past. Rejecting the advice of her traditional parents.

The third monologue, well a one sided dialogue, is a bit of a mystery, it’s the title of the play, “without reluctance and without relief”. It starts very existentialism, but turns into a man confused by either jealousy or loss. Brought back is Warren Taylor in mute role as an interviewee, as all three tables and chair are used for the very first time. Thomas Yorke, played by David Bromley, is the interviewer, during the interview we get more and more pulled in to the obscure reality of his hidden mentality.

This play felt more like a showcase, rather than a play. None of the monologues connected. Resident writer of the Brockley Jack, Howard Colyer, has written three very melodic monologues, but they weren’t very well executed. The direction by John Fricker (Without Reluctance and Without Relief & Again) and Sean Turner (You take the 321) seemed to be on the wrong path with the writing, as did the lighting by Jai Morjaria. The acting of David Bromley was brilliant, so much so, it should have been pointed at the audience to have a full effect. The second character in the third monologue was not necessary. Avita Jay gave a rather rushed performance instead of a manic one. Warren Taylor was fine in both monologues.

Howard Coyle is a talented writer and deserves to be seen.

Without Reluctance and Without Relief by Howard Colyer
Tuesday 24 – Saturday 28 February 2015 at 8.00pm

It wasn’t that long ago when anyone who gave warnings about Sleeping Beauty would be dismissed as more than a little ridiculous. The concern is that … END_OF_DOCUMENT_TOKEN_TO_BE_REPLACED

Alby hates themself, but can't work out why, and that irks them, even if they don't quite realise it. In this witty, occasionally unsubtle, but … END_OF_DOCUMENT_TOKEN_TO_BE_REPLACED

I have seen some outstanding acting recently at the intimate Finborough Theatre, and this new play is no exception. The highly talented cast quickly … END_OF_DOCUMENT_TOKEN_TO_BE_REPLACED

In the pandemic (remember that?) I worked in adult social care. My role was to help older people in their own homes with daily tasks - I’d cook meals, … END_OF_DOCUMENT_TOKEN_TO_BE_REPLACED