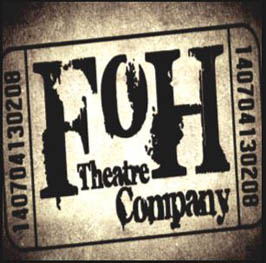 It is no secret that the theatres in London are full of unrecognised talent – off stage. Working front of house in the theatre is a fairly common side job for drama students, actors between jobs and other hopefuls. Front Of House Theatre Company are a collection of such talent, hailing from some concrete building on the Southbank that obviously can’t be named. Because everyone would be working the rest of the week, Write Here, Write Now, a collection of five short plays, is on a Sunday.

And it’s not just the company that’s front of house, most of the audience seems to also be, which means it’s a chatty, happy room of lots of people who know each other that settle down as the first play is about to start.

Preoccupied by Michael Ross begins in darkness, with the two actors coming down behind us with flash lights. We find ourselves in an abandoned tower block with two activists looking to occupy the space, which is mostly awkward conversation until the point you realise that this is actually a ghost story, and there were actual screams at one point. An interesting take on relationships, loneliness and activism, and extremely creepy.

The first date that’s happening in Surrender by Aaron Gordon lulls you into thinking you know what you’re watching – your typical first meeting after online dating that is very awkward as expectations don’t quite match up with reality – but when the penny drops and you realise what Zach expected, you go from sympathy to disgust, and while you may not agree with Violet’s methods, it’s difficult not to feel for her.

From two pieces with characters interacting, we meet two Irish school girls in the duologue We Grew Up in the Back of a Van by Katie-Ann McDonough. At first it’s a bit tough to follow, as it is on purpose fragmented and we’re following the storytelling of two very young girls who see the world differently to adults. The piece is playful and warm, with a tragic end, but still makes you smile. My favourite part was when the two girls had a fight with potato guns, leaving a mess all over the stage. Their infections joy and playfulness took us to the interval, perfectly timed as the crew had tiny potato pieces to clean up.

As we come back, it’s the classic two boys meet girl after the zombie apocalypse in Living a Little by Finlay Bain, which was possibly the strongest piece of the five. Rob and Paul has been hiding out in their flat when Penelope finds them there and is shocked by how they live a seemingly normal life as the world around them is falling apart. Containing no zombies whatsoever, the gayest straight man ever, a tough girl and a laddish bloke that surprisingly calls out the not-gay one for being sexist, the piece had the audience howling. Strong acting, great one liners like “You’re a fucking yoghurt” and wrapping it all up with a message that it’s better to enjoy life now rather than die tomorrow after rationing, I wish we could have spent a lot more time with this hilarious trio.

It is a shame that after four such strong pieces, the last one, Science Experiment by Jill Davy, didn’t quite live up to the high standard already presented. As funny as it was to see actors play multiple characters, the story of the planets as sentient beings who are merely students falls a bit flat. There are laughs for sure, and fun prop work, but compared to the other four, it’s a bit too light. It comes across more as an extended improvisations – which is fun – than an actual story.

All in all it was a terrific night out and it’s obvious to everyone in the room that there’s a great deal of talent in the Front of House Theatre Company. I expect many more great pieces from them.

Front of House Theatre Company presents Write Here, Write Now.
Producer Helen Thomas ​says, “There is such an incredible amount of talent within our building and we are delighted to, once again, be showcasing the front of house staff’s skills in writing, directing, and performing, proving that we are more than just your waiters, drink­pourers, and ticket tearers.”

Producer Samantha Schofield ​says, “We have a wonderful range of refreshing new writing showcased in Write Here, Write Now that really highlights the diversity of the members of our company. It is great to see so much dedication and ambition from our colleagues, who are giving up their time for free to produce this new work.”

This is Front of House Theatre Company’s second show at The Vaults, following on from their sell-­out debut show in December 2014.

Harold Shipman, known to his many patients, family and friends as ‘Fred’, was Britain’s worst serial killer. The official inquiry into his crimes … END_OF_DOCUMENT_TOKEN_TO_BE_REPLACED

Being one of Arthur Miller’s best-made and most challenging plays, The Crucible is also one of his most frequently performed. I was going to say … END_OF_DOCUMENT_TOKEN_TO_BE_REPLACED

To be fair, Linda Lavin called her concert Love Notes, there’s an album of the same name, and that’s more or less what it was about - variations on … END_OF_DOCUMENT_TOKEN_TO_BE_REPLACED

Noughts & Crosses is a euphemism for blacks and whites. The Noughts are the whites and the Crosses are the blacks. In the world of the play, the … END_OF_DOCUMENT_TOKEN_TO_BE_REPLACED

This ‘juke box’ musical offers highly polished, undemanding, feel-good entertainment, showcasing, as it does, 30 songs dating from the 1960s to the … END_OF_DOCUMENT_TOKEN_TO_BE_REPLACED