Home » Reviews » Review of Young Frankenstein at the Garrick Theatre 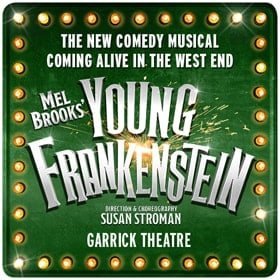 In the science lab our story starts, the young Dr Frankenstein (or should that be Fronkensteen?) is trying everything to escape the legacy left by his grandfather yet, in this totally crazy and brilliant show, he ends up lured back to his grandfather’s estate where he creates a monster of his own.

The show is full of humour from start to finish, not clever humour but very silly humour which allows you to totally disconnect from reality. Parody and innuendo are very high on the list of laughs – parodies of other musicals, parodies of comedies, parodies of horror films – it’s all there to delight the audiences. The cheesy, theatrical choreography just serves to further juxtapose the horror of the monster with the ridiculous nature of the show.

Hadley Fraser leads the cast as Dr Frankenstein bringing with him a powerful voice and an impeccable sense of comic timing whilst Summer Strallen and Diane Pilkington, as Inga and Elizabeth respectively, further strengthen the theatrical talent on display, pulling off some stunning vocal performances and some equally gorgeous dancing.

However, it is Lesley Joseph as the servant Frau Blücher, who steals the show with a hilarious, Cabaret inspired, performance of ‘He Wos My Boyfriend’ which includes everything from a ridiculous accent to chair choreography. Comedian Ross Noble also surprises as Igor, the humped butler. Whilst he doesn’t perhaps have the vocal strength of the other actors, he impresses with his comedy and sense of ridiculousness.

All in all, the whole cast were very strong. However, they were totally upstaged by the set and lighting design for the show which all served to create a surreal yet exciting atmosphere.

From pyrotechnics to secret passageways, there was never a dull moment so a special mention must go to Beowulf Boritt and Ben Cracknell for their set and light respectively.

Overall, in an increasingly politically unstable and troubling world, Young Frankenstein is a chance to totally suspend disbelief and simply laugh. Mel Brooks once again shows he can make comedy in the most surprising of places from the most surprising of subjects. The show is horrifically anti-feminist, horrifically stereotypical and sometimes downright crude yet it somehow works perfectly.

From the brains behind The Producers, Blazing Saddles and Spaceballs. Legendary filmmaker and comedian Mel Brooks brings his musical comedy Young Frankenstein to life on stage in an all-singing, all-dancing musical collaboration with Tony-award winning Broadway director and choreographer Susan Stroman.

How can a play be both charming and devastating? Through its tight script, abundant humour and pitch-perfect performances, 4th Country manages to … END_OF_DOCUMENT_TOKEN_TO_BE_REPLACED

Britain, so a London cab driver once told me, is obsessed with the Second World War, as though it happened just recently. Power Luncheon would seem, … END_OF_DOCUMENT_TOKEN_TO_BE_REPLACED

William J Dunleavy, author and star of this monologue play, is a writer and face to watch. He enters the room (as the staging is more geared towards … END_OF_DOCUMENT_TOKEN_TO_BE_REPLACED

Cirque du Soleil’s Luzia is a joyful whirl through a psychedelic Mexico, which reminds us why live theatre is so special. Anyone who goes to … END_OF_DOCUMENT_TOKEN_TO_BE_REPLACED