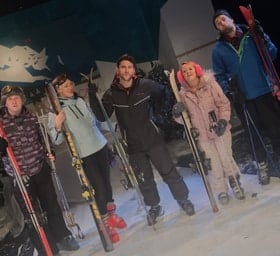 Much of the theatre was covered with artificial snow and trees, amply suitable for a production called On The Piste. I thought the performance space was quite gloriously uncluttered, and once the show got underway it was quickly easy to see why – the entire cast were on skis for a lesson given by Tony (Robbie Smith). This proved to be rather hilarious, mostly because at least two of the other characters were new to skiing. Whether an audience member’s level of expertise with regards to skiing is non-existent (like me), or at an advanced level, there’s much to be enjoyed in observing proceedings. I doubt (though I’m happy to be proved wrong on this point) that there are many skiing instructors with a similar level of verve and potency as Tony.

The play is not a straight comedy, and tackles some deeper issues in amongst the laughs: there’s a metaphor somewhere, for instance, about Bev (Ceris Hine) and Chris (Andrew Agnew) being unsteady on their feet. The awkwardness of first encounters between the two couples, Chris and Alison (Ellie Jackson), and Dave (James Murfitt) and Bev, is well demonstrated. The script has been updated to an extent since the original early Nineties version. I was going to flesh that point out before I realised I would be giving too much away.

It has been slimmed down a little, I’ll say that much, and for the better. Perhaps necessarily, the characters are very active, the play borders on being a piece of physical theatre. It’s not exhausting to watch, but after a slow start, once it hits its stride, it grew on me, and it was pleasing that the humour increased in quality as the first half went on.

Just before the interval, some remarkable comedy value is made out of the simple premise that a sauna is uncomfortably hot. Some of the audience, judging by their reaction, was momentarily uncomfortable too, with punchline laughter turning to nervous giggles. If I were to pick a favourite comic moment, though, it would probably be a scene in a ski lift. Someone in the group is scared of heights, and for reasons unexplained in the narrative, it’s not the smoothest of rides. That, and there’s no escape, at least for the time being.

This is humour of the light, inoffensive variety. Fortunately or unfortunately there are some caricatures, both in Tony and Bev. The former is very much an alpha male who derives multiple meanings from the term ‘rock and roll’, and his determined attempts to keep everyone happy (whatever ‘happy’ means) is not without consequences. The latter brought to mind Lina Lamont in Singin’ In The Rain, with a slightly irritating voice and strong accent. But she redeems herself in the end, and not just because she evokes some sympathy after a number of incidents that leave her increasingly immobile. In what becomes a showdown in the final scenes between Chris and Alison, she provides comic relief to a tense and awkward atmosphere.

The small cast have their comic timing nailed down perfectly, but the first half is so jolly it’s really no surprise that the second half has darker undertones. It was easy to engage with this production, partly as I wasn’t lost in specialist ski terminology at any point and partly because the characters here are the sort of people that do exist in real life. A pleasant and briskly-paced play.

Strap on your skis and join us for an avalanche of laughs as acclaimed British playwright John Godber takes us On The Piste to the slopes of Chamonix in this bitter-sweet Olivier nominated comedy.

First timers and Brits abroad, Chris and Alison, Bev and Dave take to the slopes and the sauna as the ski novices try to impress. They’ve got the designer salopettes, but do they have the courage to hit the slopes? Athletic ski instructor Tony is eager to put them through their paces. Both on and off piste! Away from home, emotions and passions are running high while the ‘après ski’ brings nerves and insecurities dangerously close to the surface.

Once the skis have been clicked into place, there’s no stopping this fast-paced and side-splitting play from the author of the hugely popular Bouncers.

It wasn’t that long ago when anyone who gave warnings about Sleeping Beauty would be dismissed as more than a little ridiculous. The concern is that … END_OF_DOCUMENT_TOKEN_TO_BE_REPLACED

Alby hates themself, but can't work out why, and that irks them, even if they don't quite realise it. In this witty, occasionally unsubtle, but … END_OF_DOCUMENT_TOKEN_TO_BE_REPLACED

I have seen some outstanding acting recently at the intimate Finborough Theatre, and this new play is no exception. The highly talented cast quickly … END_OF_DOCUMENT_TOKEN_TO_BE_REPLACED

In the pandemic (remember that?) I worked in adult social care. My role was to help older people in their own homes with daily tasks - I’d cook meals, … END_OF_DOCUMENT_TOKEN_TO_BE_REPLACED