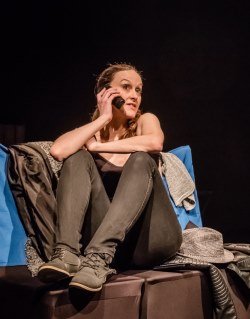 I think there was a day, a long, long time ago, when I really wanted children. A youngster or two to look up to me, trust my judgement, call me Dad and support me in my old age. Luckily for me, and the world,, someone opened a bottle of wine, and the moment passed, never to return. So, no, I’m not keen to be a father but some people really do want a child of their own. Fortunately, if the standard method – kids ask your parents – doesn’t work, then there are a range of options available. Welcome to the world of Red Squash Theatre’s Stuffed at the Brockley Jack.

Kim (Faye Maughan) and partner Jack (Ben Scheck) want a baby. Kim is forty and, as people are wont to say, the biological clock is ticking. Thanks to the wonders of the internet, the couple have found lots of advice on how to improve their chances of conceiving, such as drinking special teas or Kim spending a period of time after coitus lying on her back with her legs in the air, but nothing really seems to help, Unfortunately, after medical tests, they find out that it is unlikely that Kim would be able to conceive in the natural way, so the couple turn to the world of science. Despite its cost and invasive nature, they decide to try In Vitro Fertilisation or IVF. The need to have a baby affects both Kim and Jack’s lives and mental state, and matters come to a head at a dinner party with their friends Grace (Dorothy Cotter) and Colin (Alexander Tol) – who have three kids – and the heavily pregnant Carole (Holly McFarlane). A few drinks too many and Kim lets her feelings out, much to the discomfort of Jack and the other guests. Is medical intervention going to deliver Kim and Jack’s heart’s desire or will they have to search elsewhere to get what they really want?

I have to admit, I started off feeling a little ambivalent towards Stuffed. With the number of children in homes wanting to be adopted, I’ve never really understood why people are so obsessed with creating a child of their own. In some ways, Stuffed reinforced this view. Writers Lucy Joy Russell and Holly McFarlane don’t hold back in describing the costs and procedure involved in IVF. But, I have to say, about halfway through, I had more of an understanding of Kim and Jack’s need to have a child that was biologically theirs. I still don’t fully agree, but I am less negative about it than I was. This is a good reflection of the writing standard. The story itself is quite fascinating and most of the characters, with the possible exception of Carole, felt nicely fleshed out and believable. The four main characters, Kim, Jack, Grace and Colin really did come across, both in the writing and acting, as old uni chums that have grown up in the real world but not necessarily quite as much when they get together. Quick word for Holly McFarlane who played Kim’s mother Frances absolutely beautifully. In looks, movement and voice – not to mention the random nature of the telephone conversation – Holly was the epitome of a loving mother.

On the production front, Director Rory Fairbairn – who has a cameo role as Billy – has put together a show that flows well and has some lovely touches to it. I particularly loved the washing powder advert and the presentation that went with the explanation of IVF. The master-stroke of direction though was in the music chosen for the scene changes. The songs were appropriate and fitted in so well with the story. In fact I wish I had written them all down as they would make an awesome playlist for my journeys to work. The only negative were that being sat on the side as I was, there were occasional issues with sight lines.

All in all, Stuffed is a heart-warming tale of modern obsessions and how they can take over your life. There is a lot of humour, some sadness and a very human story at its heart which really shines through. The production works well in the intimate space of the Brockley Jack but could easily transfer to a larger theatre without losing any of the detail or emotion. No, it didn’t convince me to want to have a sprog of my own, but I will be a bit more sympathetic to those that do.

Kim and Jack are trying for a baby. Trying pretty hard. Their friends are having kids left, right and centre. A small army of doctors offer well-meaning advice but no actual answers. And nobody’s getting any younger…
But the further they go, the more they start to wonder, what is this all for? Stuffed is a brand new comedy about friendship, fertility and the choices we make.
Do you know what I think the secret to getting pregnant is, Kim?
Being happy. Every time I’ve got pregnant I’ve just felt… unbelievably happy.

Like most people, I think, I often have mixed feelings about a show I see. Occasionally, though it is rare, there will be a production where … END_OF_DOCUMENT_TOKEN_TO_BE_REPLACED

“The times they are a-changin'”, as Bob Dylan put it - and as a deceased woman’s grandson (Phillip Jones) returns home to attend the funeral, the … END_OF_DOCUMENT_TOKEN_TO_BE_REPLACED

It’s not often that the entertainment tastes of an intellectually snobby middle-aged woman and an action-mad 10-year-old boy align perfectly, but … END_OF_DOCUMENT_TOKEN_TO_BE_REPLACED