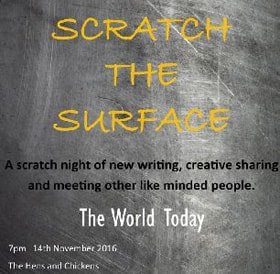 Let’s start by saying that Instinct Theatre, a recent addition to the London theatre scene, is run by its two co-founders, actress/writers Lily Driver and Felicity Huxley-Miners – most certainly names you will hear of again – as is Marina Tapakoudes, a fine comedic actress who works closely with Instinct.

Given the power of previous work written and produced by Driver and Huxley-Miners, most notably the play Stench, it is no surprise that these two talented young women have now turned their hand to a new theatrical platform, Scratch the Surface, an initiative that offers writers, actors, and directors the opportunity to display new writing in various stages of completion. What impresses is the love of theatre that Instinct displays in its quest to support new writing.

Scratch the Surface sets an ambitious agenda – to present works which touch upon the political, social, personal and survival mechanisms we adopt in response to the unsettling times in which we live. What the audience enjoyed at the Hen and Chickens theatre pub last night were 15-minute excerpts of four pieces representing a longer work: Besides the C by Francesca Mepham; Suck, Squeeze Bang Blow by Jonathan Skinner; Guerrilla Kingdom by Saria Steyl; and Tea and Good Intentions by Felicity Huxley-Miners.

Of the four, it was Guerrilla Kingdom, a black comedy around political protest and bomb making, and Tea and Good Intentions – a comedy/drama that parodies a stereotype response to a Syrian refugee – that touched upon the incendiary politics of the present day. Following the evening’s final performance, the audience was encouraged to provide the artists with support and feedback. Here’s hoping they reach their goal, which is to mount full productions of their work sometime in the near future.

Best of luck to all the creatives who took part in Scratch the Surface and great success to Instinct Theatre in providing a platform for new writing on the London theatre scene.

Scratch the Surface, a night of new writing hosted by actor and presenter Paul Lavers.

Besides The C by Francesca Mepham
A couple living in Dorset near the beach. Natalie is isolated and is mentally abused by James who is cold and cruel, when she tells him she has early stage ovarian cancer, this is more an inconvenience than anything else.
Directed by Michelle Payne
Natalie: Leanne Petitt
James: John Dayton

Suck, Squeeze, Bang, Blow by Jonathan Skinner
An intimate look at a modern day, imperfect couple. Him and Her have lost their way and aren’t sure if they want to find it again.
Directed by Hilary Burns
Her: Felicity Huxley-Miners
Him: Harrison Trott

Tea and Good Intentions by Felicity Huxley-Miners
The first meeting between Adar, a Syrian migrant, and Margaret, a middle-aged housewife who has opened her home to him for all the wrong reasons.
Directed by Dominique Gerrard
Margaret Catharine Humphrys
Adar: Yusuf Bhaimia
Mary: Erin Geraghty
Elizabeth: Lily Driver
www.instinct-theatre.co.uk

Everyman is one of the earliest printed plays, originally written in Middle English and first performed around 1510. It is a morality play, popular … END_OF_DOCUMENT_TOKEN_TO_BE_REPLACED

After being closed for over two years due to covid, the Arcola Theatre has re-opened with Barney Norris’s love song to the people who raised him, We … END_OF_DOCUMENT_TOKEN_TO_BE_REPLACED

Now in its 15th year, La Clique have firmly established their place on the world burlesque circuit and this year’s London cast bring their infamous … END_OF_DOCUMENT_TOKEN_TO_BE_REPLACED

Warm, funny and lacerating, Satinder Kaur Chohan’s new play opens with a fly-on-the-wall look at the daily attempts women make to be accepted and … END_OF_DOCUMENT_TOKEN_TO_BE_REPLACED