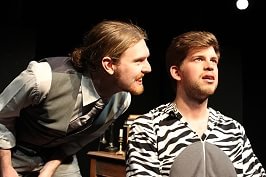 What happens after you die? That’s the question asked by 6 Foot Stories in their latest production.

Soften the Grey focuses on a man who, having assumed he has died after a diving accident must try to work out via a surreal ‘Wonderful Life’-esque tour of his past which afterlife is the one for him.

Soften the Grey is set in a strange Citizens Advice Bureau, where a diver (Nigel Munson) finds himself after dying. Here he encounters an eccentric and enigmatic receptionist (Jake Hassam), who must help the diver to decide which afterlife to choose, after going through events from the past.

However nothing here is as it first seems. Set in a traverse style arrangement in the studio space at the Hope Theatre, the piece begins at a rapid pace as the receptionist fires a series of questions at the bewildered and disorientated diver. Hassam’s receptionist is practical and pragmatic about the diver’s situation, explaining that he is there to help souls find their way, and that “there’s an afterlife for everyone”. The diver’s life is contained in one small, nondescript file on a desk and the receptionist uses it to help explore events from the past to help the diver make his decision.

Both Hassam and Munson are strong performers, and create a powerful dynamic between them. The humour and satire of the piece is balanced with more serious reflective moments throughout. The play is a wryly funny piece which looks at life after death, and what happens to those who pass on. Funny and poignant in equal measures, Soften the Grey is a thought provoking and inspired piece of theatre that manages to be both humorous and highly emotional in equal measure.

Soften The Grey
A frenzied tale of life, death and life after death. And death after life. 6FootStories come to London for three weeks with SOFTEN THE GREY, their acclaimed two-man tragi-comedy about the afterlife.

When a young diver finds himself trapped in a tunnel and runs out of air, he naturally assumes it’s game over. But then he’s transported to a bizarre Citizens Advice Bureau for the deceased, staffed only by an eccentric and mysterious recep­tionist, and things start to get a little confusing.

Taken on a whistle-stop tour of his past, the dead diver is shown a glimpse of any and every possible afterlife there is, and together, he and the receptionist must work out which eternal path is best…

Cast: Jake Hassam The Receptionist and Nigel Munson The Diver

Titus Andronicus is not usually a comedy, it is usually a bloody, villainous and vengeful tale, but tonight it is a comedy and a rather amusing one at … END_OF_DOCUMENT_TOKEN_TO_BE_REPLACED

This show is not without clichés - there are three of note in this production. Firstly, the French horn of the show’s title is personified, speaking … END_OF_DOCUMENT_TOKEN_TO_BE_REPLACED

There’s very little in the way of set in this show: aside from chairs, a few crash barriers and at one point, a red carpet, the actors’ movements … END_OF_DOCUMENT_TOKEN_TO_BE_REPLACED

South African born, but raised on the Isle of Man, Pierre Novellie is a true raconteur rather than just another 'stand-up' comedian. He says about his … END_OF_DOCUMENT_TOKEN_TO_BE_REPLACED

This show, Willy Hudson began by saying, is about himself. It is written by himself, is directed by himself and executive produced by himself. Almost … END_OF_DOCUMENT_TOKEN_TO_BE_REPLACED