Home » Reviews » Review of The Adventures of Dick! at Leicester Square Theatre 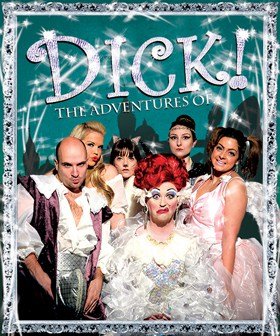 “Strap yourselves in and brace yourself, as you’ll never be the same again – you have been warned….”

This is the 5th year Dick has been at the Leicester Square Theatre. Why does it keep coming back? Well, it gives you exactly what you’d expect from an adult panto! The language is atrocious, the jokes rude and frequently cross over into crude, the acting is over-the-top, audience participation is mandatory but you’re pretty much guaranteed to laugh and enjoy yourself. However, this won’t be for everyone so you do need to be prepared to do the aforementioned joining in and not be offended easily. If that’s okay then this is for you.

The basis of the storyline is Dick (Rhys Owen) and his Pussy Dave (Rae Brogan) are galavanting around S’HoHo when they notice Queen Rant (Lucy Grainger) is raising the rents to take over and rule S’HoHo. They take it upon themselves, with a little help, to bring Queen Rant down. Will they succeed? Can Fairy Bell-End (Paula Masterton) help their quest?

For me, the show was stolen by Rachael Born’s portrayal of Alice Fitznicely. I am not sure anyone could have hammed up their part any more than Born managed. Her comic timing was superb, facial expressions a treat and the characterisation worked really well. That isn’t to take away from the rest of the cast who were all great. I particularly liked Brogan’s ability to add an appealing sexiness to Dave throughout, she just has this cute yet sassy character nailed – much like Dick wanted to throughout (I know, the whole innuendo fueled evening just works its way into your brain!).

There were a couple of disappointing aspects though. There seemed to be an overzealous smoke machine operator with the smoke being too dense onstage and frequently making it out into the audience, which took away from the performance. Also, they really need to work on their Dicktion (yes sorry about the Dick pun but the diction comment is real). There were several occasions where what was being sung or said was completely lost. The storyline doesn’t require the audience to be able to take every word in and process it but holding back a little on the pace might have helped. It did feel a little like the cast had somewhere to be after the show and sped through.

All in all, though, a good evening of entertainment and I would recommend it.

It’s Christmas! Time to unleash the annual promiscuous panto in true Leicester Square Theatre style.
Dick! and his perverted pussy, Dave The Cat, embark on the adventure of all adventures into London Town. Searching for the three F’s; Fame, Fortune and F***y, they arrive in sinful S’HoHo only to discover the delicious delinquent Queen Runt has been raising rents and buying up business in the quest to become the Lord Mayoress of London.

Running riot in the West End, Miss Dusty ‘O’ leads this institutionalised carnal romp into its fifth filthy year. London’s number one adult panto is back with a scintillating, riotously rude and hilarious evening, for the greatest and debauched festive frolic you’ll ever have.

WARNING: Dick! is not for the faint-hearted or easily offended – however there is enough to go around and remember … you’ll never miss a trick once you’ve gone DICK!