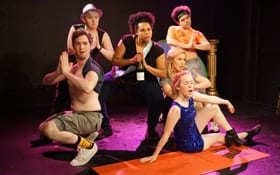 There have been some bonkers idea in the world of theatre. You know, things like putting a roller skate race round the auditorium, or basing a story on a boy that can dance while the miner’s strike goes on. But one of the strangest ideas I’ve seen in a theatre is putting on thirty plays in one hour but that is exactly what Degenerate Fox attempted to do at the Rosemary Branch Theatre with their show The Dirty 30.

Degenerate Fox are seven very talented performers – Desiree Burch, Daniel Collard, Laura Killeen, Gabrielle MacPherson, Sergio Maggiolo, Graham Self and Jay Wakely – have written and produced thirty mini plays, each lasting roughly two minutes. The plays are numbered and when the audience arrives they are given a list and as each play finishes, the audience shouts out the number of the next one they want performing. So, thirty plays, in a random order over the space of an hour. Sounds impossible doesn’t it? Well, I have to say, Degenerate Fox really pulled it off in style. I did worry how the plays would turn out, could a cohesive story be transmitted to an audience in such a short space of time? My worries were unfounded though. The plays themselves covered a huge variety of subjects. There was Trump, Weinstein, milk, the Titanic, OCD, Britney Spears, an unexpected phone call, art, and so much more.

My favourite plays of the whole lot were ‘Dique Pique’, ‘And Now We Only Speak in Soundbites’ and my all time No 1 ‘Yoga, a series: Yoga for Tha Club’ – I would so love to have the tape that was used in that one. But I didn’t actually dislike any of the plays, and each one held my interest and occasionally taught me something I didn’t know. By the way, I’m not giving too much away with these titles as Degenerate Fox add new plays to each show – as if they don’t make things difficult enough for themselves.

Degenerate Fox themselves are a really lovely group who really supported each other throughout – no mean task considering the speed with which everything moved around them. But ass well as work with each other, they were incredibly welcoming and friendly with the audience, really making everyone feel like part of the show. Leading to a thunderous round of applause when it was over not just for the actors but also for the show’s fantastic technician, Holly Casey.

This is a production that was absolutely bonkers but amazing fun to watch and be a part of. Not every play is a comedy, nor is every play a fabrication. Some will leave you wiping away tears of laughter, while others may make you feel a little uncomfortable and still others will make you really think hard. But all will enthrall and entertain you.

One final piece of advice. If you can’t get hold of a ticket to Disney’s Aladdin, then play No 30 on my list ‘We realised we all loved Disney’s Aladdin and we could pretty much show you the whole thing in 2 minutes” is an extremely fine alternative to the real thing.

The Dirty Thirty is a collection of thirty original plays which Degenerate Fox will valiantly attempt to perform within just one hour. These plays could be anything – comedy scenelets, dramatic monologues, intricate dances, games, songs, experiences – and stuff there just isn’t a definitive name for. Each week, Degenerate Fox create new material to add to the menu, creating an ever-changing smorgasbord of theatrical delights.

And perhaps most exciting of all? YOU get to decide the order in which the plays are performed!