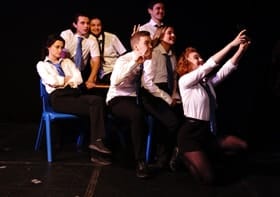 A musical about a GCSE History syllabus? That’s possibly the second worst idea for a musical in the history of the theatre – the first being, according to the programme, the 1969 musical “1776” – a smash hit back then. But if you, we, I, thought that – and, yes, it did cross my mind – then we were entirely wrong: this gem of a musical, rather than an exam-stodgy, fact-laden, grade-driven bore-fest, is funny and fun, engrossing and engaging, authentic and well-observed: there’s never a dull moment.

The young and vibrant cast really pull it off giving us a wholly realistic insight into modern day classroom protocols – the on-off relationships, the petty rivalries, the gradual sea-changes throughout the course that begins with the fairly vicious anti-swat brigade holding sway and then, as the exams loom closer, sees the pro-swat brigade emerging as the inheritors of the academic mantle.

It’s all done against a backdrop of the major steps along the way in the syllabus being presented in song and dance, mildly satirical expressions of the momentous events that forged our political world from 1919 – the Treaty
of Versailles – to 1989 when the Iron Curtain was finally lifted. Each of the pupils takes on a country, swapping their school uniform tie for a bow tie bedecked in the the flag of their nation (as well as their name’s first letter aligning with that of the country they represent) and they set about depicting the crucial moments of the twentieth century with snappy songs and subtle, accomplished dance numbers. Choreographer Jessica Dawes Harrison has a wonderful eye for effective ensemble movement in a confined space as well as a real feel for the spirit of the music. Harrison also directs the show with style and panache.

The clever and witty script makes you feel: if only my history lessons had been like this. Writer Iain Hollingshead is a History teacher himself so he knows his subject. He combines syllabus ITK with classroom nous and recognition and understanding of teenage exam-fodder angst to give us a light-touch but probing analysis of how to survive GCSE whilst balancing relationships – a charmingly authentic narrative. It feels both familiar (school-age memories) and alien (as an adult) at the same time – quite a feat to achieve. 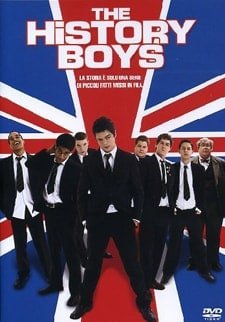 The seven pupils who form the ensemble in the show deserve to be treated as an entity rather than as individuals because this crew gives us peak teamwork. Joseph Aldous as foul-mouthed/lecher- boy Ian/Chris adeptly plays the provocateur whilst Alexandria Anfield as Fran is Miss Vitality – with a great voice. Sylvie Briggs gives a nice line in grumpy bolshevism – as befits her playing of “Russia”, at loggerheads with sweet and cheerful Beth (Eleanor
Shaw) who has some spicy interplay with Andy (Joshua Lewindon) – the love interest. It’s a strong performance from Lewindon who develops Andy’s character convincingly as the show goes on and he gives a good account of himself as “USA” showing some deft touches in the dance numbers. Charlie Burt (Jenny/Esther) gets the humour across well when putting the boys in their place and Daniel Orpwood creates a delicious contrast between the morose needling of Gary in act one and the reformed super-swat Gary of the second. This great cast of young, talented actors is like a breath of fresh air in its positive and sparkling approach to the drama.

They are led by their Teacher – Anya Williams – who sets boundaries for her charges but is very much on their side. She has some of her own demons to deal with as well and Williams effectively strikes the right balance of borderline school-ma’am and insightful freedom-seeker. It’s a perceptive and effective portrayal by Williams and her songs, particularly in the second half, are powerfully delivered.

CThe composer and MD is Timothy Muller. I’m a great advocate of seeing the band on stage in musicals but Muller – presumably with director Harrison’s input – makes the sensible decision to hide them upstage behind muffling blacks so that the performers are not drowned out in the small space: and it’s great to hear a drummer – Omid Ramak – who has a real feel for the music and doesn’t get carried away so the the singers are overwhelmed. It’s quite a feat to pull off a musical successfully in such a compact studio with a low ceiling – difficult to manage for singers – but this company – Third Way Productions – is more than equal to the task.

There is some lovely delicate lighting by Sally McCulloch and all-in-all this is a thoroughly entertaining and intriguing show. Definitely, one to chase those exam blues away.

The End of History, a new musical by the creative team behind Blair on Broadway (“An unmissable evening in the theatre – Sir Derek Jacobi), opens for a three-week run at the Tristan Bates Theatre, Covent Garden, on 14th November.

The End of History is about a group of teenagers attempting to get to grips with puberty – and the events of the 20th century. From the Treaty of Versailles to the fall of the Berlin Wall, via Munich and mocks, Cuba and crushes, is their future any more certain than the past? And might the ‘end’ of history be the beginning of something else? From 1920s’ French jazz to 1980s’ rock, via swing, bebop, rap and rock n’ roll, the End of History is a musical for the 21st century which will appeal to anyone interested in the 20th century.