Home » Reviews » Review of The Goat, or Who is Sylvia? at the Theatre Royal Haymarket

Not being married myself, this next paragraph is going to be pure conjecture. As a happily married woman, I would imagine that the worst thing that can hit you is finding out that your husband is having an affair. Now, and again I’m speculating, it must be pretty horrendous if his affair is with another woman but just imagine if he is with something else entirely. Well, now you can find out as Edward Albee’s The Goat, or Who is Sylvia? opens at the Theatre Royal, Haymarket.

Martin (Damian Lewis) has got it all. He’s an architect who was recently awarded the Pritzker Prize and has won a job to design a multi-billion dollar city. On a personal level, he looks younger than his fifty years, has a loving wife, Stevie (Sophie Okonedo) and the two of them have one child, seventeen-year-old Billy (Archie Madekwe). They live in a well-furnished house and seem to really enjoy their lives together. However, Martin has a secret, and it’s a big one. The only person he feels he can confide the details of his secret to are his best friend and confidant, television show maker Ross (Jason Hughes). So, and I’m not giving any spoilers away here, Martin confides in Ross that he is ………. having an affair …… with ………. Sylvia ………. a goat! Ross reacts rather badly to this new and, rashly, in my opinion, writes a letter to Stevie giving her full details about Martin’s straying. Well, if Ross could be said to have reacted badly to Martin’s news Sheila takes the words to a whole new level with her reaction.

To say that The Goat, or Who is Sylvia? is an odd production is a bit of an understatement. Aside from the obvious, highly unusual, subject matter, there is the dialogue itself which is riddled with language games and grammatical arguments that turn up at the most unexpected of moments. But somehow, it all works. The strange plot with its surprising twists and turns, the use of language in all its most pedantic forms and the throwing of crockery, all work together to bring the audience around two hours of solid entertainment. This is one of those plays where you will gasp with shock and then do a huge guffaw of laughter. There is a lot to think about with this story. One obvious example is Martin’s obvious disapproval of his son’s homosexuality while he can see nothing wrong with his ‘relationship’’ with Sylvia. There is also the whole idea of Martin’s relationship with a goat. Forget the physical side – and I so wish I could – he is firmly of the belief that they – him and Sylvia – are in love. There is a certain je ne sais quoi in Sylvia’s face that gives away her feelings apparently.

Our four protagonists are all highly talented and it really shows, since this is obviously not an easy play to perform in. And hats off to Archie Madekwe on making his professional stage debut in the role of Billy, a gay young man with some serious paternal issues. However, with no respect to Jason Hughes’ portrayal of Ross, the play is held together perfectly by Damian Lewis and Sophie Okonedo in the roles of Martin and Stevie respectively. There is a nice chemistry between the pair of them that really shines in the first scene – before the goat-related tales are told and stays with them right until the final scene.

Rae Smith’s design looks really nice and accurately portrays Martin, Stevie and Billy’s home – with plenty of objects close at hand for when they are needed – and Director Ian Rickson really uses the space superbly and keeps the actors on their toes and ensures the three scene transitions in The Goat or Who is Sylvia? work smoothly and don’t break the emotion and atmosphere created by the storyline.

To sum up then, The Goat, or Who is Sylvia? is a very ‘different’ show to many you will ever see in your lifetime. The subject matter will not be to everyone’s liking but, if you can get over that then this is a well produced, directed and acted production that deserves its place in the West End. It is hilariously funny and amazingly shocking in equal measure and will leave the audience thinking about their own liberal left leaning trendy ideas about what is considered acceptable and what is not in a modern society. 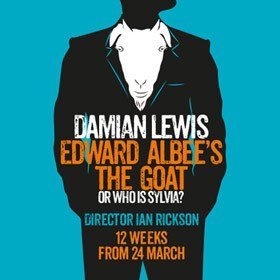 Damian Lewis and Sophie Okonedo return to the West End to star in the darkly comic masterpiece, Edward Albee’s The Goat, Or Who Is Sylvia?

Martin is at the pinnacle of life: he has a loving wife and son, a hugely successful career as an architect, and the commission of a lifetime, but when he embarks upon an improbable and impossible love affair from which there is no return, familial relationships begin to collapse.

This show is not without clichés - there are three of note in this production. Firstly, the French horn of the show’s title is personified, speaking … END_OF_DOCUMENT_TOKEN_TO_BE_REPLACED

There’s very little in the way of set in this show: aside from chairs, a few crash barriers and at one point, a red carpet, the actors’ movements … END_OF_DOCUMENT_TOKEN_TO_BE_REPLACED

South African born, but raised on the Isle of Man, Pierre Novellie is a true raconteur rather than just another 'stand-up' comedian. He says about his … END_OF_DOCUMENT_TOKEN_TO_BE_REPLACED

This show, Willy Hudson began by saying, is about himself. It is written by himself, is directed by himself and executive produced by himself. Almost … END_OF_DOCUMENT_TOKEN_TO_BE_REPLACED

The rough and tumble of secondary school life is not a time I recall with fondness by any stretch of the imagination – at the time, if anyone said, in … END_OF_DOCUMENT_TOKEN_TO_BE_REPLACED